At just 21-years-old, he's making headlines on a regular basis at Atletico Madrid and is set to be a bright prospect for the future.

The Joao Felix SBC went live on the 4th December and will expire on the 2nd January 2021. 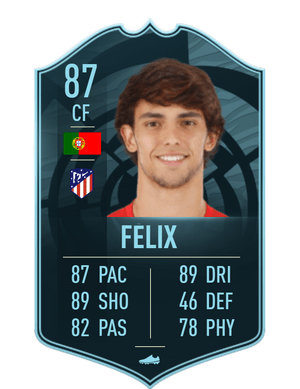 To get this Joao Felix POTM card, you will need to submit three squads:

Bundesliga provides some great options as the chemistry requirements are relatively high and Weghorst provides a great choice for an IF that costs just 17,500 coins.

I'd also recommend checking out the Spanish Midfielder Fabian who costs 18,500 coins but will require you using Serie A/Spanish La Liga players, which may cost a bit more.

This squad requires one Atletico Madrid player and since its an 85 squad requirement, you'll need at least an 83 rated player.

I would advise going for 84, but you may have a number of high rated cards.

Here's who to use:

The chemistry requirements are quite high, so you'll need to build out La Liga.

Fortunately with this, you only need 1 La Liga player and the chemistry requirements are low.

I'd recommend grabbing various 84 rated players from leagues (if you can get some soft links its helpful).

Then grabbing some high rated players to offset the rating requirement from leagues such as La Liga or Bundesliga.

So is it worth it? He's a fantastic striker and probably the most meta player in that position from La Liga.

It's a lot of money and La Liga seems to be quite behind in terms of standout strikers at present, so it's an investment that will last for a long time; especially as he's a fantastic CAM.

If you've got coins, get this card! If not, you can probably find an Icon that will match the price and stats spec sometimes in the future.

FIFA 21 TOTW 17 LEAKS: Predictions, Release Date, Countdown, Leaks, How To Get In-Forms And Everything You Need To Know

FIFA 21 TOTY LEAKS: Release Date And Time, Team Predictions, Vote, Nominees, Card Design, Nominees, Packs And Everything You Need To Know About Team Of The Year