Season 1 of Black Ops Cold War is due to arrive in December.

More specifically, the tenth of December which is exactly one week away.

The massive update was set to implement a wide array of content, including the long-awaited Warzone integration.

Warzone, Call of Duty's take on a battle royale was a massive success the last year, and players could not wait to jump off the plane yet again.

However, a new leak has surfaced that appears to all but confirm the delay of Warzone.

Just been informed from a credible source, who will remain anonymous, that the Dec 10th patch for BOCW integration with Warzone will be delayed to Dec 19th

It’s worth noting that this information isn’t official and should ALWAYS be taken with a grain of salt until either Activision or Treyarch give the word to us themselves.

It’s also worth noting that from what we’ve been told this won’t affect the release of S1 content for MP. 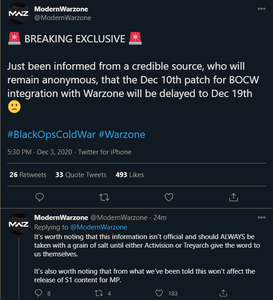 So, it appears that Warzone integration is going to take more time than we originally expected.

Treyarch has not commented on this rumor as of now, so take this information lightly until it is confirmed.

But, ModernWarzone has been known for getting most of their leaks right; so we would be surprised if this pans out to be true.

We will be sure to update you if this gets confirmed!