Red Dead Redemption 2 has released it's latest title update and whilst this makes plenty of changes to the game, it's the Red Dead Online component that sees the biggest shake-up.

This primarily includes plenty of new content for Bounty Hunters, including:

"10 new Ranks of progression atop the 20 from the Bounty Hunter Role Ranks with high level items and skills to acquire, new weapon variants and horses, Infamous Bounty targets on the Bounty Boards and more."

What fans will care about the most, we suspect, is taking on these new legendary bounties. Previously these were released one at a time, every week following the weekly reset.

Rockstar likes to give fans a bit of a backstory to their legendary bounties and the latest outlaw is no different. Here's what Rockstar has told us so far:

Prestigious Bounty Hunters should keep an eye on the Local Bounty Boards over the next few weeks for information on new Legendary Bounties, starting with dandy-turned-bastard Gene “Beau” Finley and his gang wanted for a string of robberies.

Chief among a credulous posse of mercenaries sought for orchestrating bank robberies across the south, this undesirable upstart is often seen sporting an extravagant tailored suit. Desperate to acquire infamy for all the wrong reasons, Finley must be brought to justice at the earliest possible convenience.

He and his heavily armed band are said to occupy a dilapidated colonial property in Bayou Nwa. The gang is potentially harboring captives including some particularly predatory species, so beware... 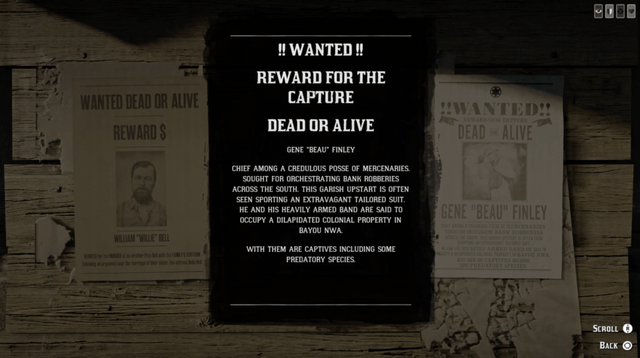 How To Capture Gene Beau Finley, Dead Or Alive

As touched upon in the above description from Rockstar, "Beau" is said to be hiding out in a "dilapidated colonial property in Bayou Nwa".

But what it doesn't tell you is just how heavily fortified Beau and his crew is. They're armed to the teeth and we imagine this legendary bounty will get very tricky the more players rank up the bounty with the 5 star difficulty rating.

As players approach the property Beau will make a break for it out the back of the house before setting off on his horse.

Call your horse and ride like the wind to catch up to him as fast as you can before bringing him in dead or alive for your reward.

Want to see a walkthrough? The below video should do the trick!