Like a sports car without an engine, Godfall is great to look at but won't get you far.

Being the first confirmed PS5 title announced, all the way back in December of 2019, Godfall is a stunning showcase of the console’s power – but its overarching game design feels distinctly last-gen.

Still, its combat is enjoyable enough – but Godfall as a game feels lacking in content and reasons to properly invest. 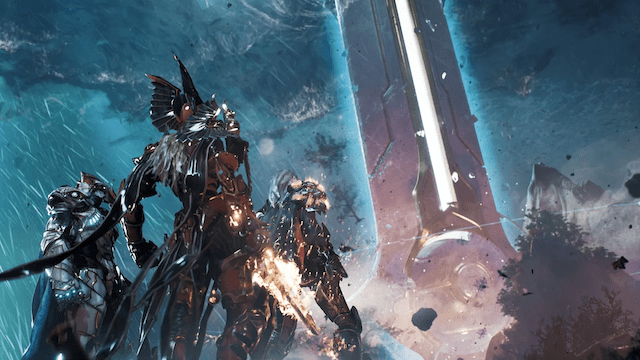 Let’s get the obvious out of the way first – Godfall is an impressive visual spectacle. Almost everything has reflections, particle effects, or just an inherent glossiness.

A truly stunning opening cutscene writes cheques that the rest of the game does admirably to cash.

All three playable characters are decked out in the shiniest of armour, too, so you’ll be seeing a lot of reflective surfaces as you wander through temples, ruins, and more.

The game’s first location, the Sunforge Temple, is honestly so bedazzling that it’s distracting at times. Every clash of blades creates sparks, and thankfully it seems early issues with the game’s frame-rate have been fixed.

It really is something to see in motion, and while whether the gold-plated world comes off as gorgeous or gaudy is entirely subjective, it’s clear developer Counterplay Games have been flexing the muscle of the PS5. 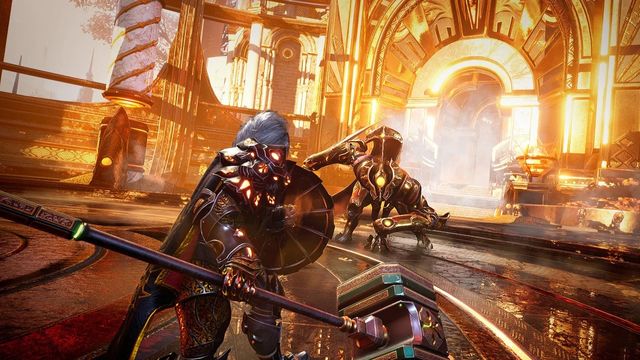 Combat is fun, but not without its issues

Defined as a “looter slasher”, Godfall’s mechanics are equal parts Diablo and Warframe.

Your Valorian knight, Orin’s, quest for revenge against your brother Macros is told through in-game dialogue that’s easy to miss when you're carving your way from room to room.

Along your journey, you’ll slay beasts, soldiers, other knights and more, using various melee combat options at your disposal. Twin blades offer rapid hits, while a huge Warhammer is slow bit hits like a truck. Then there are swords, axes, and more besides.

With two able to be carried at the same time and easily switchable, Godfall’s combat starts at a basic level and builds neatly. What begins as a simple “dodge, strike, dodge again” rhythm becomes more complex.

Orin can build up damage on foes before unleashing a “Soulshatter” attack to take out a chunk of health, while blocking, parrying, and hurling a shield Captain America-style are all par for the course.

Then there are weapon techniques for each weapon type, along with “ultimate” abilities dubbed Archon Fury that range from summoning Spirit Warriors to dealing a huge amount of damage in an area.

While learning new moves and improving your skills is one of the big draws of progression in Godfall, the cracks soon show.

For one, dodging feels sluggish and doesn’t put a great deal of distance between you and your enemies. Then there are enemy types that shield other bad guys but seem to constantly retreat to stop you doing anything about them.

Perhaps most infuriatingly, there’s no animation cancelling, which combined with a less than consistent blocking 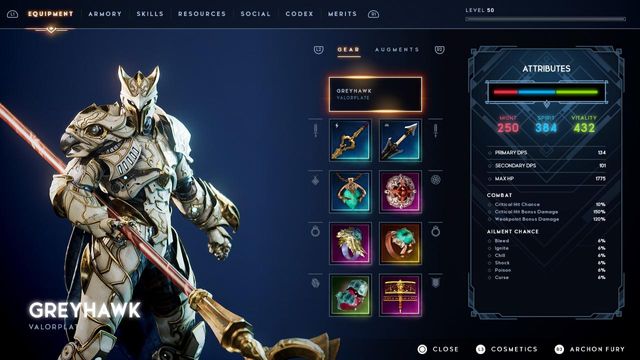 The loot system is disappointing

These are all the kinds of things that could likely be ironed out in the weeks to come, despite the developer’s clear statement that Godfall is not a live-service game.

What blunts the blade of our heroes here are the game’s progression systems, both in terms of content and investment.

Godfall’s three realms are frequently gorgeous to look at, but the game sends players there so many times to earn a currency called “Sigils” that it devolves into trying to speed run your way through.

These Sigils unlock the next set of quests, which likely send players through the same area again, unlocking loot as they go. This makes it a great social game, at least, but at launch, Godfall does not offer matchmaking or cross-play with PC. It’s a puzzling decision.

The trouble with Godfall’s loot is that while the level of each new weapon increases, and can be fleshed out with the right skills, none of the weapons feels all that different from one another outside of their respective archetypes.

The twin blades you earn in the opening hour, for example, only really differ from the ones you’ll grab when you hit level 50 because they have a higher number.

The saving grace here are Valorplates, which essentially act as your suits of armour. While only offering relatively minor gameplay wrinkles, some of them do look incredible, and a tinkerer will undoubtedly have plenty of fun customising new gameplay builds with the (admittedly small) pool of options.

Godfall attempts to build a world that players will want to run through ad infinitum to earn fresh loot, but fails to provide adequate reasons to do so.

Anyone fortunate enough to pick up a PS5 will no doubt question whether this genuine next-gen exclusive is worth dropping upwards of £60 on. But with so many flaws and the likes of Demon's Souls also offering largely the same gameplay elements (but with greater polish and finesse) it's hard to justify the whopping expenditure on this largely shallow looter; as shiny as it may be.

Review Code Provided By The Publisher
Reviewed On PlayStation 5