Pokemon Go: How To Get Galarian Mr Mine And Evolve Mr Rime

It's been just over a year since the release of Pokemon Sword and Shield, which arrived on Nintendo Switch on 15 November 2019.

Since then, the Pokemon Company has slowly rolled out a few new Galarian Pokemon to Pokemon GO.

So far, this has included the likes of Sirfetch'd, Ponyta, Meowth and more.

But it looks as though the game is gearing up to release another Galarian Pokemon before the end of the year.

And it's great news for fans of performance artists!

That's because Niantic appears to be teasing the introduction of Mr Rime, the evolution of Galarian Mr. Mime who is famous for tap dancing.

Following the release of the new GO Beyond Update, the Pokemon Blog published a load of information relating to upcoming events, raids and more.

But the parting shot of the blog also noted that there was "Even more fun winter - and holiday- themed events [will be] tap-tap-tapping their way toward you soon!"

How to get Mr Rime in Pokemon GO?

Unfortunately, the process is anything but simple and actually involves handing over money for the privilege.

"The Dancing Pokemon and its Evolution, Mr. Rime—both originally discovered in the Galar region—will soon be coming to the world of Pokémon GO in a ticketed Special Research story event."

To get the 'Tap… Tap… Tappity-Tap…' Special Research, you must open the Pokemon Go app during the event.

The good news is that you can complete it at any time. A ticket is $7.99 (or the equivalent in your local currency) and cannot be purchased with PokeCoins. 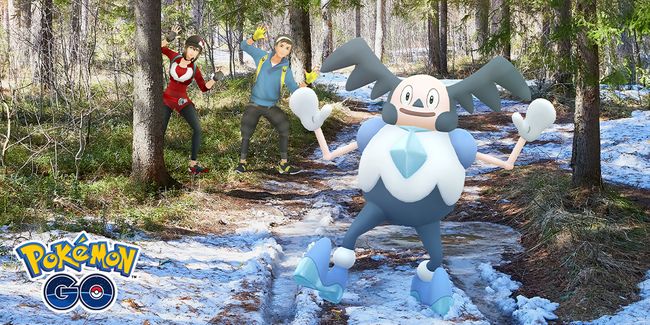 Original Story Details (Now Invalid) - For the time being, the Galarian version of Mr Mime (a Psychic/Ice dual type) is not yet live in the game.

By extension of that, Mr Rime, the evolved version of Galarian Mr Mime, is also not yet live.

It seems likely that both Pokemon will become available once the Pokemon GO Christmas Event goes live.

Right now, the event has yet to be announced but logic would suggest the event will go live roughly a week before Christmas.

When this event does go live, it's possible Galarian Mr Mime could be introduced in a variety of ways.

So we'll have to wait until closer to release to learn how easy or difficult it will be to get Galarian Mr Mime and Mr Rime.