The spiritual successor to the SPAS-12 has quickly become one of the most popular secondary weapons to use since the release of Black Ops Cold War on November 13th.

The weapon was first manufactured by Italian company Franchi in 1979, and is still used by several military forces today.

Thanks to the Gunsmith, there are seemingly limitless attachment combinations to equip on the SA12 along with the rest of the class creation components.

But what exactly is the ultimate Gallo SA12 loadout?

The shotgun is the perfect secondary weapon to deal a ridiculously high amount of damage in close-quarters situations.

Thanks to its semi-automatic firing mechanic, it fires as fast as you can press the trigger and with minimal recoil, it is certainly one of the strongest weapons to use in close-range and sometimes mid-range encounters.

It is extremely easy to switch weapon, head to a busy area of the map and clear out the opposition with ease.

This set of attachments adds even more firepower to improve its effectiveness at longer distances and increase its accuracy, enabling you to dominate the opposition when firing from the hip.

Hip-fire is the ideal way to use the Gallo SA12. Simply spray at your intended target and you will emerge the victor from the gunfight. 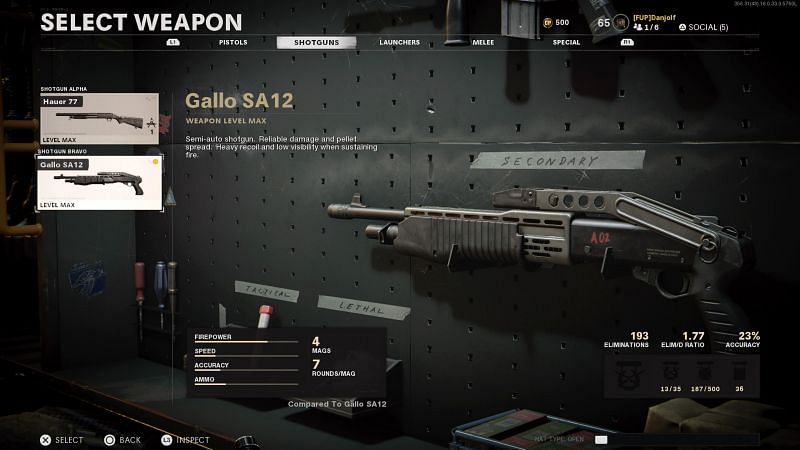 The AUG tactical rifle is arguably one of the strongest weapons to use in Black Ops Cold War.

Thanks to its deadly accuracy and firepower at long-distance, it complements the close-range lethality of the Gallo SA12, giving you the perfect combination to excel from any distance imaginable.

If you’re causing chaos at close-range with the Gallo SA12, you’re going to want a piece of lethal equipment that can keep the eliminations rolling in.

The Semtex is the perfect choice. You can throw it much faster than a frag grenade and its ability to stick to almost anything can be a convenient way to deal with a pesky opponent.

The stun grenade is the tactical equipment most effective when using the shotgun.

By slowing down the movement of the target, it gives them little to no chance to escape your shotgunning shenanigans!

When you’re hurtling around the map with the Gallo, it’s more than likely that you will be around areas of the map that are populated by more than one member of the enemy team.

Place a trophy system near to where you’re standing in order to prevent any grenades bringing a premature end to your rampage.

This selection of Perks is the ultimate combination which suits the Gallo down to the ground. Flak jacket and tactical mask provide resistance to both lethal and tactical equipment, tracker gives you the ability to see the footprints of nearby enemies, while ghost and ninja keep you hidden from enemy spy planes when moving and silence your footsteps when sprinting.

This particular Wildcard allows you to choose three additional perks to increase your capabilities on the battlefield. Want to select Cold Blooded and Ghost so no enemy scorestreaks can spot you? Give it a go!