The first Record Breaker cards have been released into FIFA 21 Ultimate Team during the Black Friday promotion, and boy are there some awesome cards!

Celebrating various records that these players have broken throughout their career, these cards feature big boosts in select stats depending on the records broken, with some featuring some game changing upgrades.

Here are all the Record Breaker cards we’ve seen so far in FUT 21, along with some predictions of cards that could still be dropping this year.

So far in FUT 21, we’ve had 7 Record Breaker cards released, with 1 SBC, 1 Objective and 5 cards into packs, featuring players that have broken the record for: 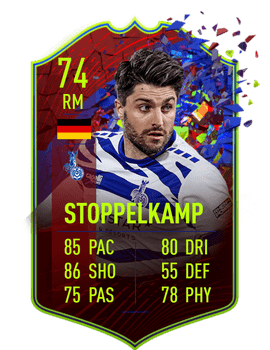 The first ever Flash Player SBC released into FUT, Stoppelkamp is a fantastic SBC, even if he is a silver! While he may be difficult to link into teams for Silver Stars being from Bundesliga 3, with 85 Pace, 86 Shooting (including 95 Long Shots) and solid all around stats, he’s an awesome player.

Unfortunately, by the time you’re reading this, his SBC will have expired, being only available for 12 hours since release, so keep your eyes peeled for more Flash SBC players released throughout the potential Super Sunday or Cyber Monday drops. 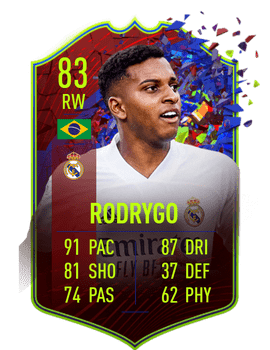 Rodrygo is the Objectives player for the Record Breakers team during the Black Friday promotion, and you can view all of his objectives that you’ll need to complete here.

Featuring a well boosted card with at least +4s in all card stats, as well as a boost to 4* Weak Foot to honour his perfect hat-trick, Rodrygo is an awesome card to receive through objectives for free, and with somewhat of a lack of right sided attacking options in FUT, he could be a standout option, especially for La Liga teams.

Yep, they actually did it, Mbappe has received a Record Breaker item in FUT 21, honouring his UCL achievement for being the youngest player to score 10 goals in the competition.

While his stats may not look too dissimilar to his regular 90 base item, this colourful card comes with a whopping +4 Shooting boost, now featuring 95 Attack Positioning, 95 Finishing and 90 Shot Power, which is a sizeable upgrade over his base card.

His price certainly reflects the boost to Mbappe’s impact in and around the box, setting you back in the region of 3 million coins across the 3 platforms, but with how meta the Frenchman is, he certainly justifies the price tag.

What a boost this David Silva card has received, taking him back to the glory days of a glittering Manchester City career, in which he was the fastest player to reaching 200 league wins.

With an incredible boost to pace and physical, with +16 and +10 respectively on his most recent in-form, this almost looks like a Flashback version of David Silva, who’s now incredibly usable.

Now with 87 Acceleration, coupled with his world-renowned playmaking and dribbling ability, you now have one of the best-attacking midfielders in La Liga at your disposal, and costing only a touch over 100,000 coins, he may be one of the best value players in FUT 21 currently.

A much-needed boost has been given to Jadon Sancho’s card for his impressive time at Dortmund in the Bundesliga, honouring his fine goalscoring form in Dortmund’s yellow and black.

With a +9 boost to his shooting, as well as a +4 boost in pace, this card definitely leans towards becoming more usable in FUT, with 5* skills as well.

Now with 91 Finishing, Finesse Shot Trait and 93 Attacking Positioning, Sancho looks like a rather usable player from more central areas, and with 90 Acceleration and 85 Sprint Speed, could even be deployed in his natural RM/RW position now, a top-level card!

Awarded for scoring the most goals in a single UEFA Europa League campaign. (18/05/2011)

The cheapest tradeable Record Breaker card out of the set, but definitely don’t ignore Radamel Falcao, as his Flashback-esque card looks to be an incredibly usable one!

With +19 Pace, +11 Physical, +10 Shooting, +9 Dribbling as well as +7 Passing and Defending, this is one of the biggest boosts we’ve seen to a card so far in FUT, and despite being relatively difficult to link playing in the Super Lig, could be a real asset to your FUT squad off the bench.

His shooting stats are the real standout here, as you’d expect given the reason behind his Record Breaker item, featuring 98 Positioning, 93 Finishing, 90 Volleys and more.

When coupled with his Outside Foot Shot, Power Header and all-important Finesse Shot Trait, Falcao looks to be the definition of a ‘fox in the box.’

The final release so far for the first Record Breakers team is Oscar, who in the CSL adds to an incredible pool of talent released recently, alongside Rulebreakers Talisca, IF Paulinho, Hero Alex Teixeira, as well as the Flashback Alessandrini recently released, meaning you have plenty of options to link this card to.

A very well rounded attacking midfielder card with good pace, shooting, dribbling and passing, Oscar certainly delivers in all the necessary stats, and at only 75,000 coins is an affordable option for those looking to run with slightly cheaper off league teams!

It’s been announced that we’re set to receive 5 more Record Breaker cards on Sunday, as teased by Sporf on Twitter, so who could we be set to receive?

Here are 4 cards we’d love to see released as the next set of Record Breakers in FUT 21!