Sergio Aguero has received an SBC in FIFA 21's Ultimate Team as a special Flashback Card!

His flashback card throws it back to the 2013-2014 season where he scored 17 league goals.

The Argentinian forward has always been a favourite in FUT but has lost a little pace this year and this card seems to rectify that!

It's also one of the first times a player has had their rating reversed from its base rating.

The Sergio Aguero SBC went live on the 27th November at 6 pm GMT. 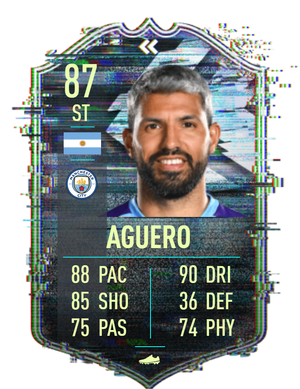 To get this Sergio Aguero Flashback card you will need to submit the following squads:

For this challenge, the chemistry is quite low so you can focus mainly on the rating of players.

Serie A boasts a number of 84 and 85 rated players for cheap that you can utilise.

The Bundesliga and Premier League are great choices for this.

Ultimately, the chemistry is so low it shouldn't matter too much who you use; you can use players that don't link together as long as they're in the right position.

Other leagues to consider for high rated players are La Liga and Bundesliga.

So is it worth it? If you're building a Premier League it's a really good striker but I'm not sure if he's one of the best strikers on offer in a league that has ample choice; especially for the price.

It's a lovely compromise for what is traditionally a great striker in FUT - sacrificing some of his technical skills for more pace.

Having said that, the technical abilities are negligible and his attacking stats can be improved by a chemistry style.

What's even better is he has gained some agility, taking him to 90.