The FUTMAS cards are coming!

As FUTMAS approaches, with an expected release coming around Friday 11th December, it’s time to take a look at all the potential FUTMAS Player SBCs and the countdown we could be seeing this year in FUT 21.

Here are our predictions and a few players we’d like to see released through SBCs over the FUTMAS promotion!

How FUTMAS Player SBCs Are Released

The biggest draw of the FUTMAS Event is, without doubt, the recurring Player SBCs that are released every day of the promo.

2 FUTMAS Themed SBCs will be released every day during the event for 24 hours, meaning you’ll have to think fast as to whether you want to complete an SBC, or let it pass.

In recent years, the themes of FUTMAS SBCs have been surrounding:

On the first day of FUTMAS, EA Sports gave to us, we won’t make that a thing for the rest of the prediction, don’t worry, but nevertheless, for day 1, we can expect players from: 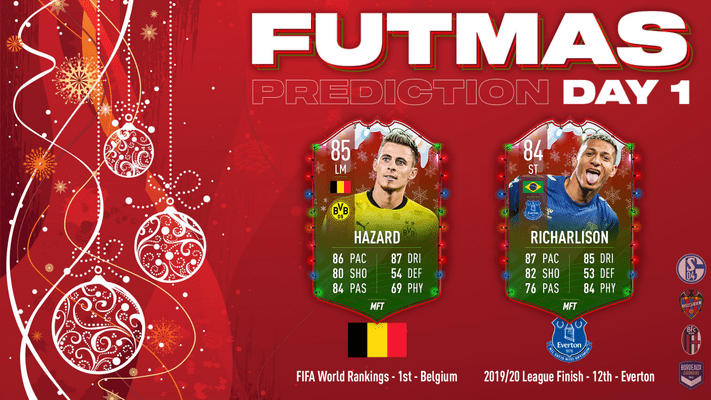 For Day 1 of FUTMAS, we’re predicting a Thorgan Hazard from Belgium, and a Richarlison from Everton. Both cards would be rather desirable items, especially the Brazilian, and would kick FUTMAS off with a bang!

For Day 2 of FUTMAS, we can expect players from: 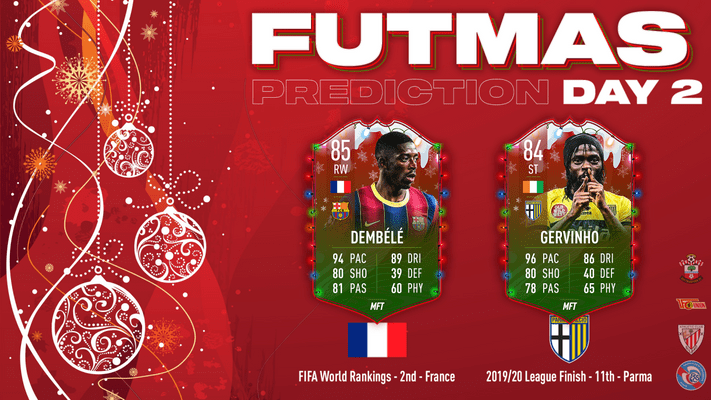 An Ousmane Dembele card (notice the RW position change), would be one of the more completed FUTMAS items throughout the promotion, given his meta links, 5* skills and 5* weak foot, we’d love to see him included. Gervinho could be an exciting, cheaper SBC released, covering the league finishes side of things with Parma.

For Day 3 of FUTMAS, we can expect players from:

Diego Carlos was one of the more meta CB options early on in FUT, and would no doubt be a very popular FUTMAS SBC, should he be released as the Brazilian option. For teams that finished 10th, the options weren’t the strongest, however we feel a Nick Pope SBC would be awesome given his meta status in FUT 21.

For Day 4 of FUTMAS, we can expect players from:

For FUTMAS Day 4, we’ve tried to kick it up a notch. We feel Wan-Bissaka (although the plentiful options in RB in the Prem), would be a great SBC, although we could potentially see someone like Greenwood as well! Our favourite pick here though has to be Gelson Martins for Monaco who finished 10th in Ligue 1’s abandoned season last year, what a card he would be!

For Day 5 of FUTMAS, we can expect players from:

Some cheaper SBCs for day 5 after the last 2 days of relatively expensive options. We’ve gone for Ruben Dias for Portugal, who could be a decent, affordable SBC after missing out on OTW and RTTF cards. For Freiburg who finished 8th in the Bundesliga last season, Christian Gunter would be an affordable, yet meta German LB option.

For Day 6 of FUTMAS, we can expect players from:

Diving into FUTMAS Day 6, we’ve gone for a lower rated Spanish option in Morales, who looks to be an unreal card when given a boost to 84, and would like to the very popular Inaki Williams Rulebreaker SBC. For the league finishes, we decided to show Serie A some love, giving Insigne another boost, upgrading his shooting and passing a good amount.

For Day 7 of FUTMAS, we can expect players from:

Day 7 has the potential to be an awesome day of FUTMAS, with Uruguay’s options in midfield including our pick Valverde, but also Bentancur. We decided that Lucas Moura would be an unbelievable selection for FUTMAS this year, given the lack of top level meta right sided attackers in FUT this year.

For Day 8 of FUTMAS, we can expect players from:

FUTMAS Day 8 could deliver some very intriguing cards, with Argentina under the spotlight. We chose Dybala for our prediction to get a high rated option in there, but there are plenty of options, with Tagliafico being a popular one for the Promes and Eredivisie links. For Villarreal finishing 5th, Coquelin could be an exciting option, who’d get a decent boost all the way up to an 85!

For Day 9 of FUTMAS, we can expect players from:

A couple of cheaper options in FUTMAS Day 9 to balance things out somewhat. Croatia is a difficult nation to select a player from, given Modric’s inclusion in FUTMAS last year. We went with Brozovic, being the next highest rated card, who could be good with the right boosts. For the 4th placed team selection, Pulisic from Chelsea looks to be a great shout!

For Day 10 of FUTMAS, we can expect players from:

Colombia is another of the nations that doesn’t have too much top tier talent, however, an Arias card with big boosts at Leverkusen could make for a solid RB option in the Bundesliga.

Now that we’re reaching clubs that finished in the top 3 in their leagues last season, it’s time to juice up the predictions, we reckon Martial could get into FUTMAS, and what a card he would be!

For Day 11 of FUTMAS, we can expect players from:

While we’d all love to see a Lozano card to represent Mexico, Raul Jimenez could be another spicy option in attack, with all 80+ in all card stats other than defending.

For the 2nd placed finish, we decided to choose Barcelona and give Sergino Dest a massive boost up to an 84, creating a meta RB option in La Liga that many would be interested to complete!

For the last day of FUTMAS, we can expect players from:

Rounding off FUTMAS, we have 2 very desirable SBC selections in my opinion. Bernardeschi at an 85 for Italy would offer a mid-range, yet meta 5* skill option to link with the likes of Ronaldo.

For the title winner selection, we’ve gone with a choice from the European Champions Bayern, giving David Alaba his first special card of the year, taking him up to a very usable 86 CB item.