The current season of Fortnite has less than a week left to go.

We do not know what the new season is going to entail, but we do know that we are about to face off against Galactus in the season-ending event.

The Fortnite competitive scene lost a few of its founding players to Warzone earlier in the year, these players are of course Nickmercs and Aydan.

Two of the most well-known controller players in all of gaming did not touch Fortnite for almost a year.

But now they have both streamed it in recent days.

Now it appears Epic themselves have teased the possibility of the two getting their own competitive cup in the future!

This notion was sparked by a tweet from Aydan, which noted the following:

I think @FortniteGame needs a @NICKMERCS + @aydan cup. You only get points for elims, no placement points

This, of course, is an interesting format, to say the least; as we see most cups have a point system based around placement more so than kills.

This only appeared to be a joke at first, but the following tweet was a reply from the official FortniteCompetitive account! 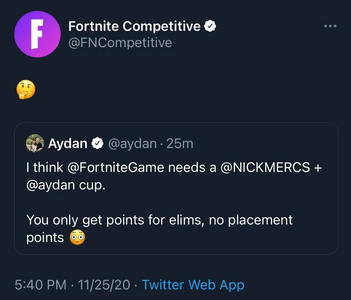 Whether or not this cup actually happens is unknown as of now.

But it would be an interesting event to say the least!