Insomniac took a lot of risks with 'Miles Morales’ and they all paid off.

It’s not every day that a game as culturally relevant as Marvel’s Spider-Man: Miles Morales comes around. It’s an experience about family and loss that takes place during the holidays, mirroring the tumultuous times we currently face in the real world, as many of us are unable to visit loved ones due to the ongoing pandemic. On top of that (and even more importantly) it highlights people of color in a way that no game has even come close to doing, making it one of the most important and inclusive PlayStation games ever.

Taking place shortly after the events of 2018’s Marvel’s Spider-Man, a young Miles Morales must fill in while the “real” Spider-Man is away, sending him on a journey that ultimately teaches him to overcome doubt. It’s no easy feat to protect New York City, but it’s up to you, the player. and Miles to do your best.

Miles Morales is an Afro-Latino and is the very first Black character to don the Spidey costume. The way Insomniac Games handled Miles’ heritage is nothing short of impressive, as the character is often heard speaking Spanglish with his Puerto Rican mother. The way the actors depict the mother/son relationship feels so authentic and is a major testament to the care Insomniac put into the writing and portrayal of the characters.

Inclusiveness is the Highlight of Miles Morales 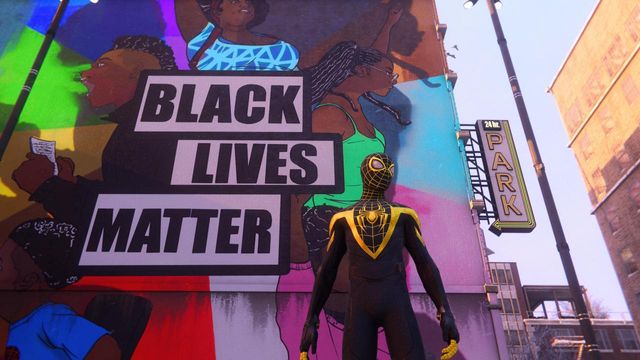 Miles' identity is at the heart of the story

Not only that, but Miles’ black heritage is placed under the spotlight, too, as demonstrated by the prominent hip-hop music interwoven throughout the entire game with such style. The biggest and most impressive example is a scene in which Miles proudly stands in front of a Black Lives Matter mural found at the heart of the city. The importance of this inclusion cannot be overstated.

The inclusiveness doesn’t stop there – Miles’ best friend, Ganke Lee, is Korean, while other major characters like The Tinkerer and The Prowler are both Black. There’s even a deaf character you’re introduced to partway through the story, giving you an incredibly diverse cast of characters that is refreshing to see, especially when they’re portrayed so authentically.

Aside from its cultural relevance, Miles Morales also features the same fantastic gameplay and combat you remember from the original, but with a few additions to coincide with our new hero’s powers. Unlike Peter Parker, Miles can turn invisible and utilizes his Venom strike, which is composed of energy conducted through his gloves. These two powers are not only implemented into the combat but through puzzles, as well. Again, it's a refreshing change of pace that helps this game stand on its own from the original, despite the obvious similarities.

Beating up bad guys while chaining your arsenal of attacks has never felt so satisfying, especially when you pull off your combos in a stylish manner. The implementation of the Venom attacks feels natural and works well, even more so when you fully upgrade everything. That loop of earning XP to unlock new abilities and costumes is just as enjoyable as it was in the 2018 title, especially when considering the number of moves to unlock.

Miles has a completely different animation set to Peter Parker

The web-slinging is just as good as you remember from the original, making you feel like Spider-Man as you make your way across Manhattan. The addition of little moves and embellishments in between swings here and there are Miles’ way of showing his personality without having to utter a word -- all depicted while zipping across New York City.

Insomniac nailed inclusiveness, not just in the story and characters, but in the way the game plays, as well. There are a ton of options and an entire Accessibility menu dedicated to allowing as many people as possible to play. Things like narrated ASL, various button holds, presses, and assists, and even a slew of visual aids prove just how far we’ve come in the video game industry. And a game as significant as this one will surely inspire other developers to follow suit.

That’s the thing about Miles Morales: It takes a lot of risks and does so as a game that has a lot of eyes on it. It’s as if Insomniac knew it had a responsibility to be as inclusive as possible, hopefully setting a precedent for other games to follow. As Uncle Ben said, “with great power, comes great responsibility,” and Insomniac Games exemplifies that beautifully.

Despite Miles Morales being much shorter than the original, the pacing and length feel just right, while still offering a complete, well-told story and plenty to do. In fact, the concise nature of this game feels more impactful than its predecessor as it throws its story beats at you one after the other, without letting up. This is bolstered by the fact that it’s not a fully priced, $60 game, justifying its shorter length. Not all long games are automatically better and this is proof. 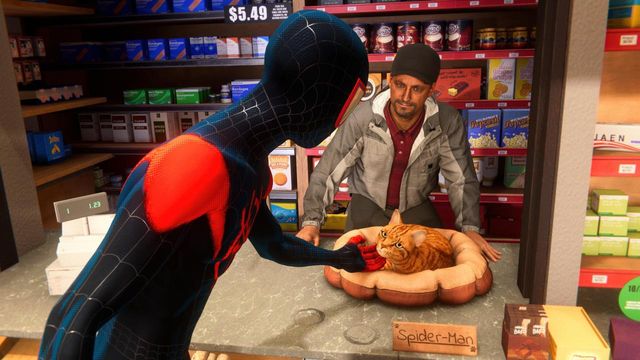 Many of Miles' missions involve helping his community

Miles Morales is also a game that’s full of heart, ranging from sombre, to silly, and funny. One of my favourite side-missions involves Miles searching for a cat named Spider-Man whose owner is put off by your appearance, referring to you as a kind of "fake" Spider-Man. Upon retrieval of the cat (which is extremely cute, by the way), the owner changes his tone and gives Miles a fist-bump to show his support.

The story itself is, much like the original, almost movie-like in quality. Everything, from the way the narrative unfolds to the pacing, and the performances are cinematic and again, a testament to how far this medium has come. The characters and their relationships are believable thanks in part to the spectacular animations, lip-syncing, and acting. 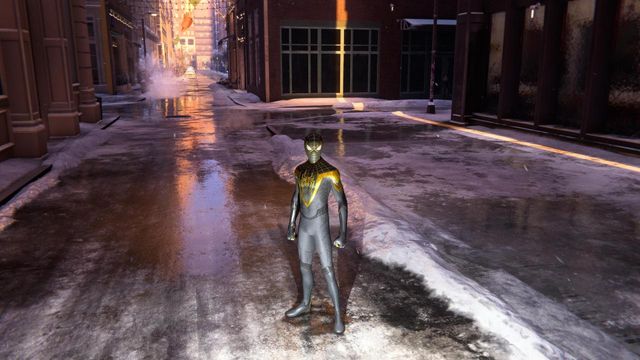 The ray tracing is incredible

The visuals, in particular, are stunning, especially running on a PS5. I was constantly in awe while swinging past reflective puddles on the ground, or the realistic lighting that would come through the gaps between buildings. By using the game’s robust Photo Mode (which you need to mess around with because it’s incredibly fun), you can zoom in on the characters’ pores on their skin, or the stitching on Miles’ suit. It’s unbelievable.

One of the only times the story falters is when considering the motivations of some of the characters, particularly the villains. They’re certainly more dynamic and believable than many villains across the medium (and many of the original title's cartoonish rogues), but I was left scratching my head when trying to understand why these characters did what they did. I would have liked to have felt for them, but for the most part, the villains are just flat out unlikable, despite Insomniac's emphasis on them.

If you can get past that, you’ll likely have an absolute blast with Marvel’s Spider-Man: Miles Morales. It feels amazing to play, tells a heartfelt story with a diverse cast of characters, and highlights people of color in such a way that made me teary-eyed on more than one occasion. The relevance of this game can’t be overstated -- not just in comparison to our own cultural issues in the real world, but with the way it draws parallels to corrupt people in power. Miles Morales is much more than a game about being Spider-Man. It should be remembered as a game that inspires hope during trying times.