Call of Duty: Black Ops Cold War Campaign: How To Complete The Operation Chaos Side Mission On Veteran Difficulty

The fifth chapter of the Black Ops sub-franchise sees players dropped into the height of the Cold War as a group of elite operatives attempt to prevent Soviet spy Perseus from launching a wave of nuclear weapons on the rest of the world.

Alongside the main campaign storyline, there are two side-missions that can be completed once players have found a sufficient amount of evidence.

The first of the two side-missions is Operation Chaos, which is unlocked after the Fracture Jaw mission.

In this guide, find a full walkthrough of the mission as well as sone handy tips on how to complete it on Veteran difficulty.

Before we begin the walkthrough, it is essential that you have acquired enough evidence beforehand. Once you’ve found the evidence, we recommend that you play this mission after Redlight, Greenlight.

When you are ready to start, head to the evidence board and select the “Launch Mission” option.

For this mission, you will be playing as legendary Black Ops character Alex Mason. You and Woods will be hot on the heels of Aldrich in a helicopter. The helicopter will land close to a convoy that Aldrich is part of.

Once you’ve hit the ground, enemy soldiers will jump out of the vehicles and begin to open fire. Eliminate the enemies closest to you then take cover next to the truck nearby.

As you push up the road, keep clearing out the enemies until you reach the gas station where Aldrich is hidden.

TIP: Use the barrier lining the road as some cover as you deal with the hostiles protecting Aldrich.

Once all the enemies are clear, it will give time for Aldrich to move further up the hill. Make your way to the right of the gas station and keep moving up the hill. Deal with the soldier wielding an RPG before progressing any further.

For those wanting to get up close and personal with the opposition, stick with the shotgun and LMG combination but for those that prefer to pick off soldiers from range, there is an M82 sniper rifle propped up against the checkout of the gas station. 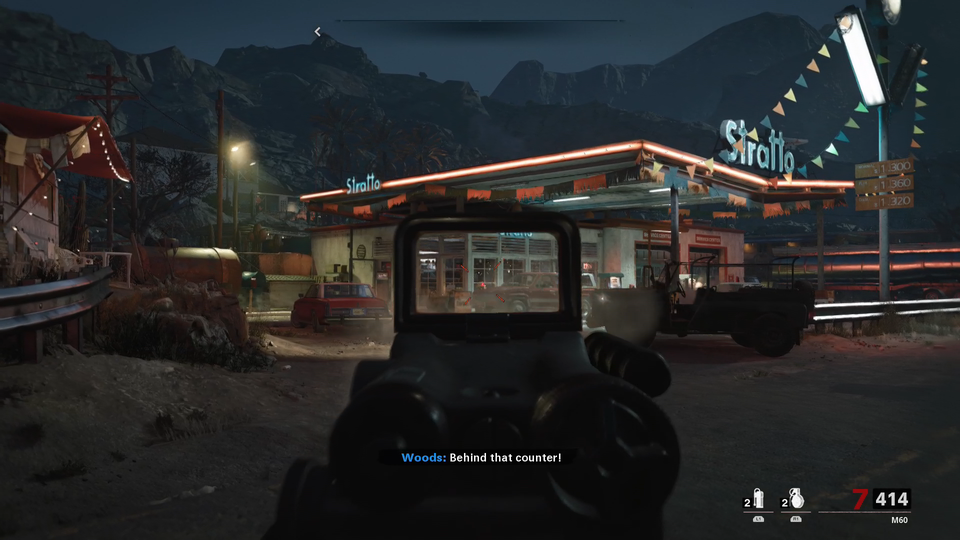 Head past the gas station along the road moving up the slope. There are several enemies that line the road and patrolling the rooftops, so be sure to clear the area before making your way to the motel where Aldrich has retreated to.

Deal with the guards on the second floor of the motel then head upstairs to the marked door with Woods. As the door breaches, a slow-motion section will commence. Eliminate Aldrich then take out the two guards in the room.

Take a look at the body of Aldrich, take a picture to confirm the kill, then head back outside. Your helicopter out of the area gets hit by an RPG so you’ll need to find another way out of the area. Another wave of enemies will appear so take cover and clear the area.

As soon as the car park is clear, move down the slope and back down towards the gas station. More resistance will line the streets so take them out quickly as you exit the area. When you arrive at the gas station, climb the ladder at the rear of the building and climb aboard to complete the mission.

Is Sea of Thieves Worth Playing In 2021?