The PLANET9 University Invitational Comes To A Dramatic Conclusion (Sponsored)

But who emerged victorious?

This month, PLANET9.gg, in partnership with Acer and Predator Gaming, pitted eight ultra-competitive university esports teams against each other in a massive League of Legends tournament.

It was one of the most hotly contested gaming tournaments of the year with each team competing not just for a share of the £2,000 prize pool, but also the ultimate bragging rights of being declared the champion of the inaugural event.

After some extremely intense matchups, some epic comebacks and some very skilful play, the winning team was finally declared over the weekend and we’ve got a rundown of the grand final down below.

We’ve also got all the information you need to begin creating your very own esports tournament on PLANET9.gg, plus the chance for you to win more than £2,500’s worth of Acer Predator gear.

READ MORE: Don’t get dominated by esports pros online; get coached by them on PLANET9

This month, PLANET9, in partnership with Acer and Predator Gaming, pitted eight ultra-competitive university esports teams against each other in a massive League of Legends tournament.

After the fiercely-contested group stages, the live final was held on 21st November. And after the semi-finals saw the teams from Imperial College London and London South Bank University both knocked out, the final came down to a matchup between the two pre-final favourites; the University of Central London and the University of Roehampton.

It was an intense match but the University of Central London took the win and was named champions of the inaugural PLANET9 University Invitational, taking home the biggest share of the £2,000 prize pool. Imperial College London won the third-place play-off. 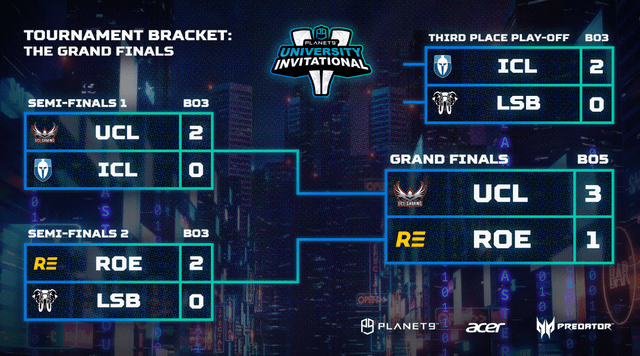 The Victors: The University of Central London proved they were among the favourites for a reason

After helping their team secure the win, FiLexMAMO from the University of Central London was declared the tournament’s MVP after securing 47% of the Twitter poll held during the tournament.

What’s next for the PLANET9 University Invitational, you might be asking? Well there are big plans for the tournament in the future, a representative said:

“PLANET9 is pleased to have been able to offer a fresh opportunity for university students to get involved in esports.

“At PLANET9 we see great potential in university students and we look forward to taking the University Invitational to another level as well as continuing to grow esports programs on PLANET9 as more players and fans jump on board the platform.

“Our goal is to expand the University Invitational to a national scale and maybe even to an international level. Stay in tune to PLANET9.gg for more.”

Take on the world

If you’ve not heard, PLANET9.gg is a community-driven esports platform, designed specifically for gamers who love to compete. It allows you to create your own tournaments, build your own esports team and learn from some of the best players in the world.

So if you’ve been dreaming up your own esports tournament for years but never had a place to host it, then you’re in luck, because PLANET9.gg is exactly what you’ve been looking for.

Forget trying to keep track of bracket placements and round results in bloated spreadsheets or on paper; PLANET9 makes putting together your own gaming tournament a wonderfully simple process.

In the Battle section of the site, you’ll be able to create your own esports tournaments for the hottest games around, from League of Legends to Fortnite, with a deep suite of customisation options allowing you to create the competition you’ve always wanted to compete in. 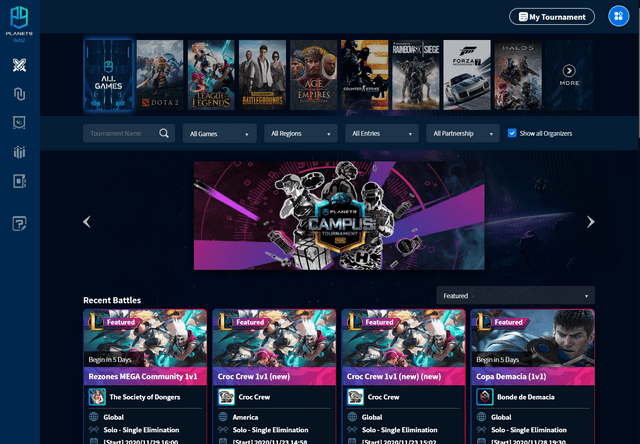 Fight Night: Create the esports tournament of your dreams on PLANET9

You can set everything from the number of participants to the prize pool and the format, so you could create a quick tournament that lasts an afternoon or set up one that will be decided over several weeks - the choice is yours.

Once you’ve created your ideal esports tournament, you’re able to make it either private or public. If you want to compete with top players from around the world you can, or if you’d rather just take on your friends that’s also possible.

PLANET9 really does let you create the esports tournament that bests suits you and your friends without any fuss.

Head over to PLANET.gg for full instructions on how you can win these amazing prizes.