A great month for PS Plus?

Sony has now confirmed the titles being offered for players, and the leak was right (and our predictions way off!)

A now-deleted tweet from the PlayStation Saudi Arabia account suggested that fans will be able to enjoy Just Cause 4 and Rocket Arena as their PS4 titles, with Worms Rumble arriving for PS5 and PS4 owners. 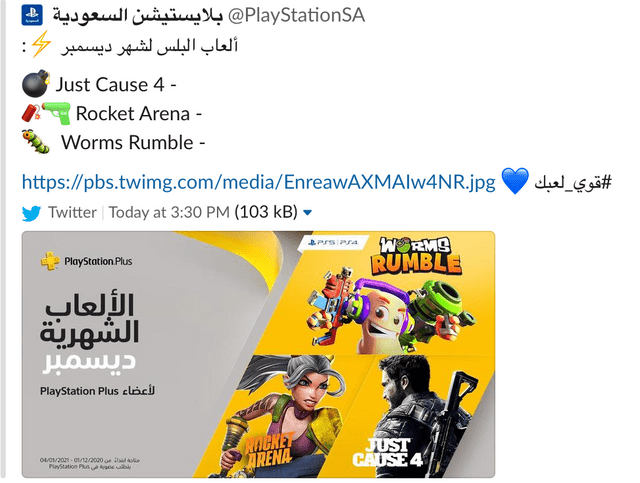 We'll update this story as we hear more.

Offering a huge number of titles to play from first and third-parties, it's a huge added perk on top of freebies like Bugsnax.

While we're yet to find out how often games will be added, we have some prediction as to what could be next on the list for monthly titles.

We don't like to go too hard on PS Plus predictions here at Gfinity, namely because we know Sony often releases plenty of surprises.

There's rarely any logic to what PlayStation Plus games are given away so it's best to not overthink it.

That said, there are plenty of quality titles that haven't appeared in the PlayStation Plus Collection, or haven't been given as PS Plus offerings in the past.

While we've long suggested Horizon: Zero Dawn and Uncharted: Lost Legacy could be the titles coming (and yet neither has appeared), we'll go with the rather different combo of Dark Souls: Remastered and Watch Dogs 2.

With Demon's Souls launching and getting everyone in the mood to "Prepare to Die", we'd love to see Dark Souls Remastered given away.

As for Watch Dogs 2, while Legion is undoubtedly fun, it lacks the carefree nature of the second title.

Then again, both titles are currently on sale, which may preclude them from appearing in this month's Plus offerings.

Check out the descriptions courtesy of the PlayStation Store below:

"Then, there was fire. Re-experience the critically acclaimed, genre-defining game that started it all. Beautifully remastered, return to Lordran in stunning high-definition detail running at 60fps."

"Play as Marcus Holloway, a brilliant young hacker living in the birthplace of the tech revolution, the San Francisco Bay Area."

"Team up with Dedsec, a notorious group of hackers, to execute the biggest hack in history take down ctOS 2.0, an invasive operating system being used by criminal masterminds to monitor and manipulate citizens on a massive scale.

When will PS Plus December 2020 free games be confirmed?

The PS Plus December 2020 free PS4 games should be announced on Wednesday, October 25, 2020 - although Sony doesn't always stick to that schedule.

These games should then become available to download on Tuesday, December 1, 2020.