Football Manager 2021 marks a new high-point for the long-running franchise.

Another season, and another Football Manager release, but this year’s game marks the franchise’s finest entry yet. Sports Interactive takes many of the individual parts we’ve come to expect and elevates them to new levels, with both obvious and more subtle tweaks. 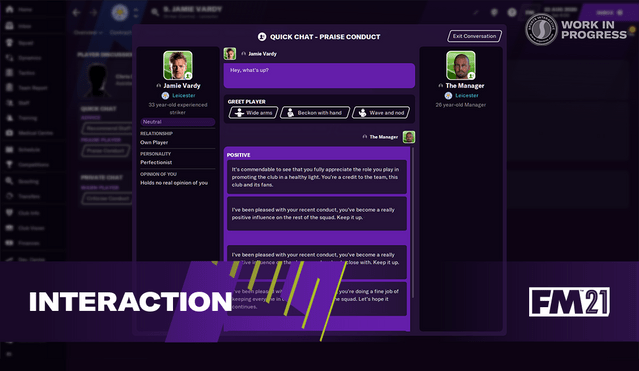 At its core, Football Manager 2021 still revolves around leading your chosen team to victory. You’ll still recruit players, oversee training, and set your tactics for the best chance of success, but many of the more important facets of the game have undergone some reworking.

Take interactions, for example, a broad category of press conferences, team meetings, and “hat in hand” apologies to the board for blowing their money on a £30 million wonderkid who won’t be ready for first-team football until 2030.

Previously an endless slog of picking individual answers to questions, Football Manager 2021 adjusts things to take body language into account. Fed up of your star player getting sent off in a local derby? Point the finger at them and give them both barrels. Looking to calm down an over-zealous full-back that’s already on a yellow card? Open your arms to calm their competitive nature.

These all feed into the micro-narratives that Football Manager has long excelled in, and adds a much-needed layer of humanity to what can otherwise feel a bit like a series of spreadsheets. It’s hardly the Sims, of course, but it’s a big step – even if team meetings that warrant a series of individual responses can now feel like trying to speak over a rabble at times.

A new Quick Chat system lets you give feedback to players with a couple of clicks, taking away from calling constant meetings with your best and worst performers, while the press officer will now provide a briefing before press conferences and feedback afterwards.

Oh, and yes, you can throw water bottles now. 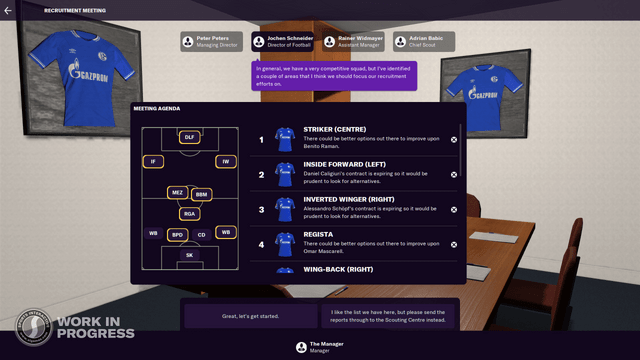 One of the best elements of Football Manager 2021 is in how it approaches recruitment, with key staff requesting your presence to prepare transfer plans for the window ahead (and often even further in advance).

It’s an opportunity to plug gaps in the squad, and while each meeting can take some time (especially if your scouts are worth their salt), it adds to the feeling of being a cog in a machine, as opposed to an autonomous force. Of course, you can ignore the suggestions, but they generally proved useful in my experience, suggesting replacement players for those soon to leave, or cover for long-term injuries that I hadn’t considered.

When approaching a player, you can now sound out their agent, too. Finding out if a player might be keen without investing unnecessary resources into fighting a losing battle is a very welcome addition. 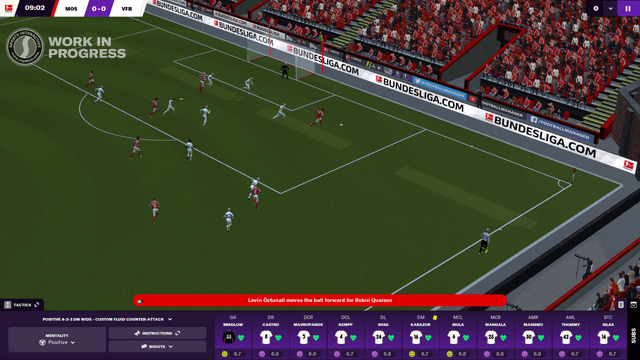 Match UI has been considerably cleaned up

While last year’s release undoubtedly had some issues with some of the best players in the world being a little too focused on hitting the side netting, Match Day in Football Manager 2021 feels much more stable.

Sports Interactive claims that players make decisions every quarter of a second, and while they’ll undoubtedly make mistakes, it feels overall a more comprehensive experience throughout the ninety minutes.

Aiding immersion is a series of new camera angles, but perhaps most important is the way information is presented. The usual stats are available while playing (as well as the xG number to show how profligate your strikers are being), but many update much more quickly than they have in the past, while your staff’s advice no longer feels tucked away during match days – and feels more reactive to what’s going on from minute to minute.

With the way of the world right now, the team at Sports Interactive has implemented COVID-19 in the game.

Finances are lower, league start dates have been changed, and transfer windows have been tweaked where appropriate, but settle back to normality after a season or so.

The team also opted to allow virtual fans into the game’s stadia right from the off to help improve finances, while also smartly choosing not to add COVID-19 to the game as an “illness”. It’s an unenviable task to implement in a management simulation, but it’s hard to argue that it’s not the right call given the circumstances.

Football Manager 2021 makes good on many of the promises from last year’s game, while making smart additions to the core pillars of transfers, interactions, and match day.

While the world of sport feels some way off of normal, it’s like welcoming an old friend – and is sure to take over your life more obsessively than ever before.

Review copy provided by the publisher