Call of Duty: Black Ops Cold War Campaign: How To Complete End Of The Line On Veteran Difficulty

Perseus has been busy...

Call of Duty: Black Ops Cold War is available across a total of five platforms and contains an action-packed single-player campaign.

After another briefing at the safehouse, you’ll begin the eleventh mission of the campaign, known as “End of the Line”.

In this guide, find a complete walkthrough of the mission, including some helpful tips on how to complete the mission on Veteran difficulty.

End of the Line Walkthrough

WARNING: Before starting the mission, make sure you have finished the side missions if you’re interested in them. By starting this mission, this begins the path to the end of the story.

At the beginning of the mission, you’ll be taking control of Bell and you’ll be alongside Park and Lazar.

TIP: You’ll start the mission with the LW3 – Tundra sniper and a 1911 pistol. Keep hold of the sniper for the entire mission and swap out the pistol for an Assault Rifle at the earliest possible moment.

Head up the steps and into the church.

When you’re inside the church, make a right turn, and walk a short distance while both Park and Lazar will take cover near the doorway. Make your way to the door and push through.

Push to the Palace 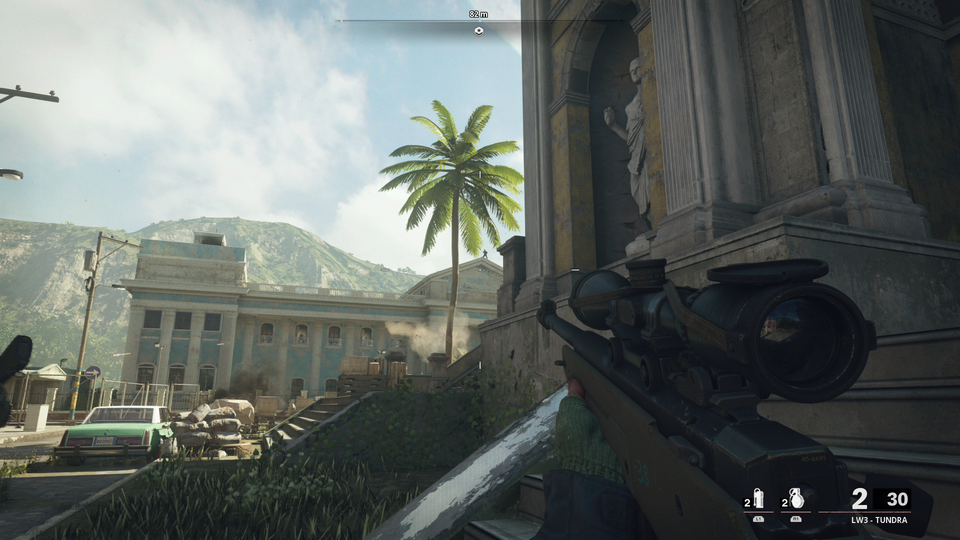 Now out of the church, you will meet up with Adler and the other members of the team. Head down the street and find a place to take cover.

Turn your attention to the palace and utilise the sniper to pick off enemies on the roof and inside the windows on the upper floor. When clear, advance to the pillars found opposite the palace and take out the second wave of resistance.

TIP: Keep your focus on the roof and the enemies appearing in the windows while your teammates clear out any opposition that appears on the ground.

With the windows, rooftop, and street clear, enter the palace alongside your teammates. 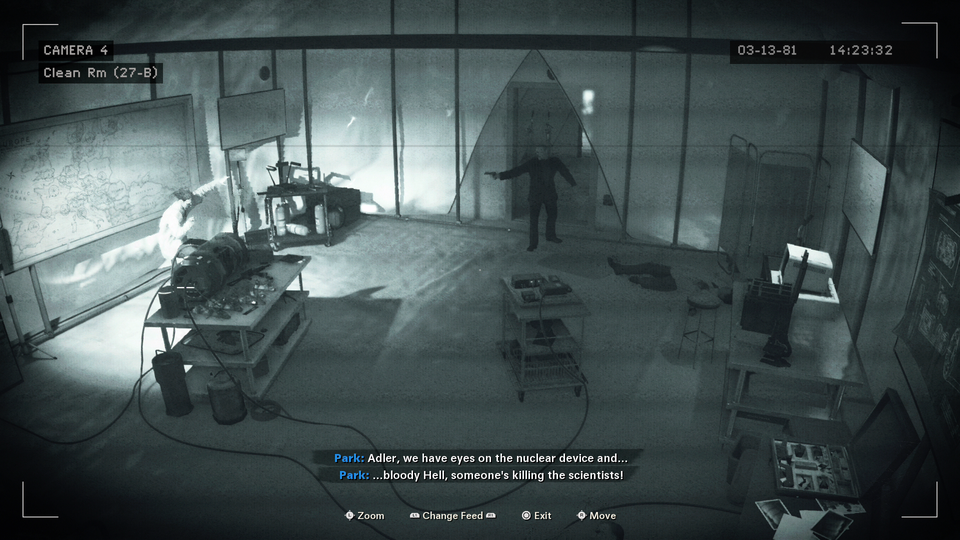 Grab some frag grenades from the crate in the centre of the room then head to the right with Lazar and Park to begin the search for the Security Room.

Move through the hallway as they head towards the right side of the palace. Another three soldiers will appear so dispatch of them quickly and continue moving through the building. Now into the next area of the building, you’ll spot a scientist running around. You’ll also find a room full of proximity mines which the scientist will run into…

Clear the path and take cover under the shelter in the middle of the area. More soldiers will appear so eliminate them while avoiding any proximity mines. With the area clear, carefully make your way up the stairs.

Take cover and kill the soldiers located in the upper walkway before making another move.

TIP: On the right side, one of the soldiers has an RPG so deal with him first to avoid an explosive ending.

With the enemies taken care of, make your way to the other side of the room where a set of doors will open, revealing another wave of resistance. Take them out and advance through the doors.

Head to the right and eliminate the guards that attempt to ambush you by bursting out of the Security Room. Head inside and use the CCTV system to check the cameras.

Move through each of the cameras until you select Camera 4, which reveals the nuclear device in Room 27-B. As you watch the camera, someone will eliminate the scientist standing next to the nuke.

Read More: Black Ops Cold War: Playing On A Terrible Set-Up Made Me Better At Call of Duty

Regroup with the Team

Park and Lazar will break through the door, follow them down the hall until you and the team reach a green metal gate. Stick some C4 onto the gate and watch it blow. Head through the gate to join the rest of the team. 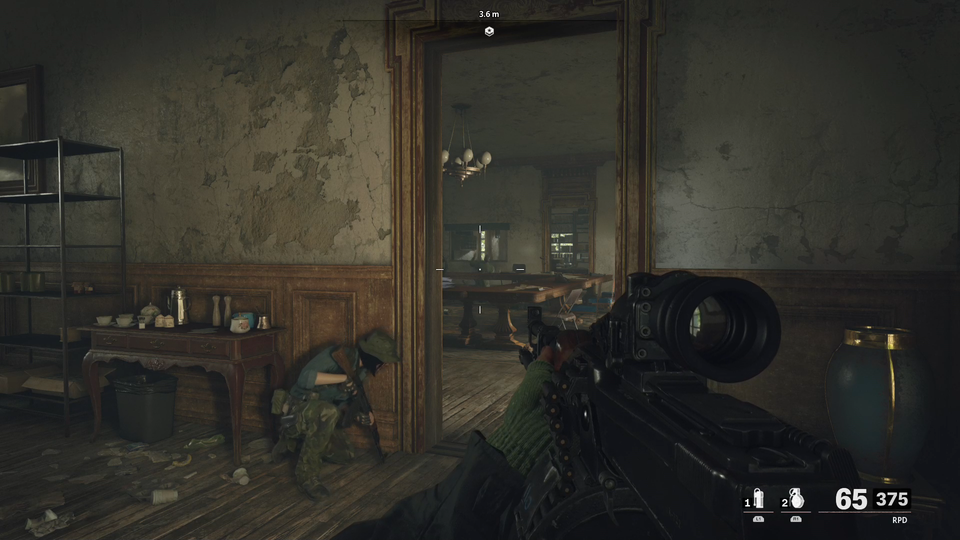 Adler and the rest of the team have been pinned down by a group of soldiers. Move upstairs, turn right, and eliminate the soldiers scattered in the hallway.

With the hallway clear, make another right turn into room 21-A and advance through the next door where another group of enemies will be waiting.

Now the room is clear, advance to the next doorway and follow the pathway to the left. As you move along the path, there will be more scientists attempting to run away from snipers on the roof. Use your own sniper to pick them off.

Advance down the hallway dealing with any opposition hiding behind cover. At the end of the hallway, make a left turn and take cover from the machine gunner. Take him out with a cooked grenade or a precise snipe then keep pushing along the pathway.

After you’re past the machine gun, turn left and you will find Room 27-B. Kill the last few guards before entering the room.

Grab the evidence on the table next to the nuclear device and an injured Hastings will reveal that Perseus has access to all nuclear devices involved in Project Greenlight.

Escape to the Roof

Armed with the intel, head back out of the room and make a left. Move along the path and you will see a door fly open. Take out the solder that emerges from the doorway and advance through. Follow Lazar through more rooms, pass the scientists, and head left back out onto the walkway.

Eliminate the soldiers at the end of the hallway then head inside the room on the right where you’ll find a window which leads to some scaffolding. Follow the scaffolding until you reach the rooftop where some of the team will be located. 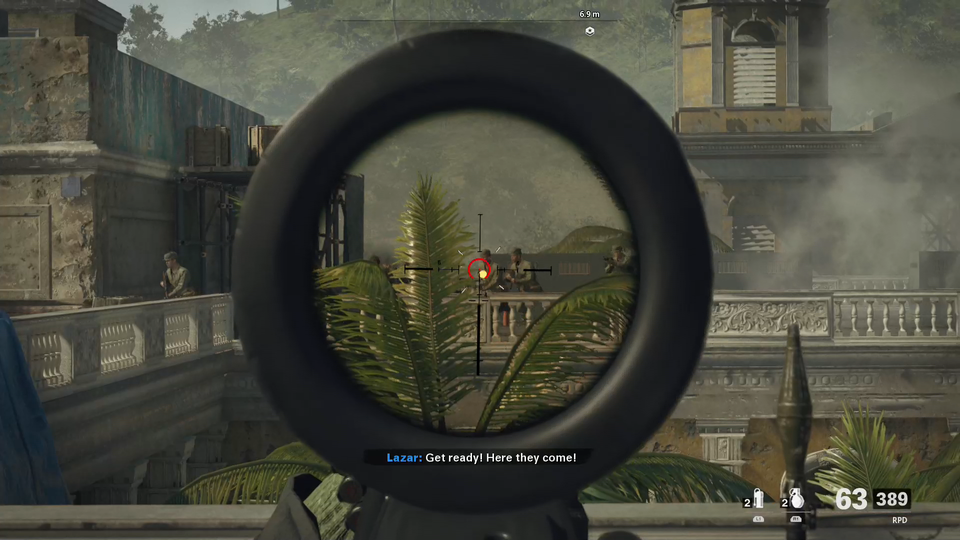 With a few minutes to wait until the transport arrives, you must survive any resistance that attempts to stop you from escaping.

TIP: There is a wide range of weaponry scattered along the floor so make sure you are armed with plenty of firepower before the opposition arrives.

Use your sniper to pick off a group of snipers which appear on the roof to your right. With the roof clear, deal with any other troops on the rooftops before switching focus to the walkway across the roof.

The group will begin running so use any explosives to take out the group as quickly as possible. With the walkway clear, a large group of opposition will appear from the left side of the roof. Take cover and eliminate them.

As you open fire on the left side of the roof, you will receive a radio message from command offering air support. Use the gunship to clear out as many enemies on the roof to ensure a safe escape.

With enough of the enemies cleared, it will be time to make the escape. Move towards the ledge and strap in ready for the pick-up.

An RPG will scatter the team across the roof, leaving you to decide whether you save Park or Lazar. Make your choice, strap them in and the mission will end.