Team of the Week is back for a ninth week in FIFA 21 Ultimate Team and it is live on Wednesday!

TOTW 8 was undoubtedly the best squad so far and Week 9 could be just as good!

FIFA 21's ninth TOTW will be revealed on the 25th November at 6pm GMT.

They will then be removed from packs at 5.59pm GMT the following week (2nd November).

Team of the Week 9 Prediction

TOTW 09 features an awesome attacking lineup ahead of Black Friday, with a potential inclusion for a certain Portuguese striker! 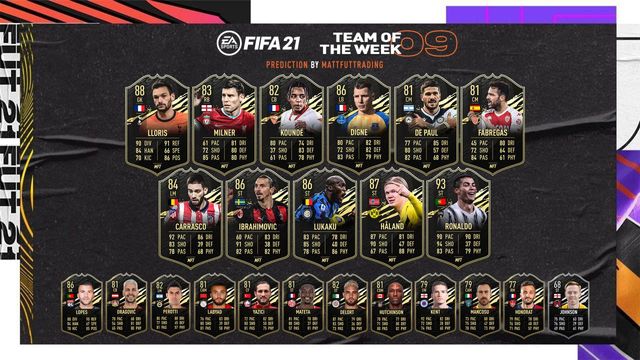 The Spurs captain put in a MOTM performance in their 2-0 away win over Manchester City, keeping a clean sheet, making 5 saves in the process.

Milner put in a fine display in RB, picking up an assist and a clean sheet in Liverpool’s deserved 3-0 win over Leicester City last night.

Quite a difficult week for CB inclusions, however, Kounde seems somewhat likely after picking up a goal and a decent match rating in Sevilla’s 4-2 win over Celta Vigo.

Everton’s playmaking LB earned 2 assists in a narrow 3-2 away win at Craven Cottage, which should be enough to secure him his first IF of the year.

A difficult week to predict CMs as well, meaning Udinese’s De Paul could get an IF for scoring the winner against Genoa.

Fabregas was an architect to Monaco’s incredible comeback victory, assisting one of Volland’s goals as well as scoring the match winning penalty in the 84th minute. There’s no doubt that he makes it into the TOTW 09 squad.

Despite only scoring 1 goal, Carrasco should feature in TOTW 09 given that his goal was against Barcelona in a 1-0 win.

Zlatan deserves an IF, without a doubt, this week after scoring 2 goals and earning a MOTM award for an impressive display away at Napoli in Milan’s 3-1 win.

An absolute lock this one, with Lukaku having a say in all 4 goals in Inter’s 4-2 win over Torino, scoring a brace and assisting twice as well.

The rumoured Golden Boy winner has been at it again, and will likely be headlining the TOTW this week after scoring 4 goals in Dortmund’s 5-2 win over Hertha.

While Ronaldo may have only contributed 2 goals for Juventus, with Black Friday upcoming, EA may look to include him to juice the TOTW to increase pack sales. This one is a slight longshot, but with Messi being dropped in TOTW 07 for just 2 goals, Ronaldo could easily get the same treatment!