Sami Khedira has received an SBC in FIFA 21's Ultimate Team as a special Flashback Card!

During his Real Madrid days, the German midfielder was a rock in the midfield and an incredible addition to the squad's 2012-2013 season.

Other than lacking a bit of pace, it's a very well rounded card.

The Sami Khedira SBC went live on the 19th November at 6 pm GMT. 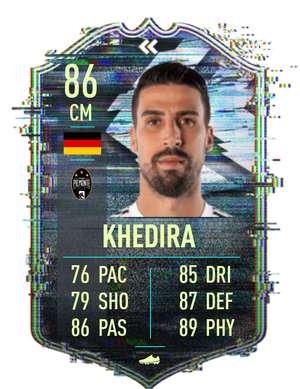 To get this Sami Khedira Flashback card you will need to submit the following squads:

For this SBC, you're somewhat limited by the Real Madrid or Piemonte Calcio player that you choose.

Some of the best options are:

If you want to make life easy, you can build-out of the nationality of your chosen player.

You'll need an in-form and Spain has the best options at a good price:

You can opt to use some Brazilian in-forms as well to partner with Marcelo.

This is rather straight forward and just requires a series of 86 rated players.

Using players from Ligue 1 or Serie A is your best bet.

So is it worth it? It's a fantastic card and with an Engine should improve the flaws that this card presents (pace and dribbling).

It's going to be a while before a good Serie A CDM pops up and this could be a perfect choice.

There are some more cost-effective German players in that position that you could use.