The French winger has bested two of the world's best strikers and fellow compatriots Mbappe and Ben Yedder - as confirmed by UNFP.

The 24-year-old should receive a significant boost that makes him a fearful player amongst the FUT favourite.

The Jonathan Bamba SBC went live on the 22nd November. 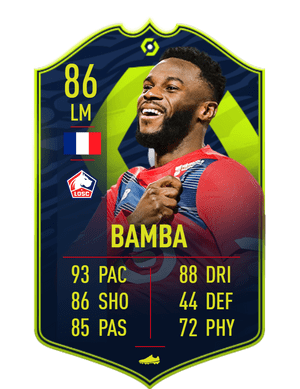 To get this Jonathan Bamba POTM card, you will need to submit three squads:

Using a Premier League team is probably the easiest thing to do as you can keep the rating high, grab a cheap in-form and keep the costs down.

The Premier League has a number of cheap in-form players to get the job done.

Again, opting to go with the Premier League squad is the easiest way to get this done.

Finally, using a combination of Ligue 1 and Serie A players is the cheapest way to do this.

So is it worth it? Jonathan Bamba's in-form card is already a fantastic choice with bags of piece, great dribbling attributes alongside a 4* weak foot and 4* skills.

His high-high work rates are also great and give you a versatile option.

Where his in-form lacks is a bit of strength, stamina and finishing.

His POTM card should push him to an 84 rating at least and drastically boost his stats to make him a formidable winger.

Not to mention, he'll get a strong link for M'bappe users and good links to other French players.

FIFA 21 UCL Team Of The Group Stage: Release Date, Latest News, Content, Predictions And Everything You Need To Know

FIFA 21 TOTW 10 LEAKS: Predictions, Release Date, Countdown, Leaks, How To Get In-Forms And Everything You Need To Know