Call of Duty: Black Ops Cold War Campaign: How To Complete Echoes Of A Cold War On Veteran Difficulty

Can you hear the echo?

Call of Duty: Black Ops Cold War and its single-player campaign is full of twists and turns.

The dynamic duo of Woods and Mason head to Yamantau in a bid to prevent the Soviets from acquiring intel from a disused facility. The seventh mission of the campaign is named “Echoes of a Cold War”.

In this guide, find a complete walkthrough of the mission along with some handy tips on how to complete it on Veteran difficulty.

Echoes of a Cold War Walkthrough

The mission begins with you assuming the control of Mason leaving a helicopter armed with a silenced sniper rifle.

Follow Woods along the path to get into the action.

Select either pathway as you follow Woods to the end of the snowy trail. Jump over the rocks at the end and descend down the slope.

Drop off the small ledge and continue following Woods into the building. When you reach him, crouch and pick off the nearby soldier with the sniper.

TIP: Click the left analogue stick in to steady the scope to guarantee a headshot.

Head along the path for a short distance where two more enemies will appear. Pick one off while Woods deals with the other. Move towards the cliff on the right where a zipline will be located. Clip in and slide down. When descending, use the sniper to take down the soldiers at the bottom of the zipline.

Walk along the small trail and the Soviet SATCOM building will appear. 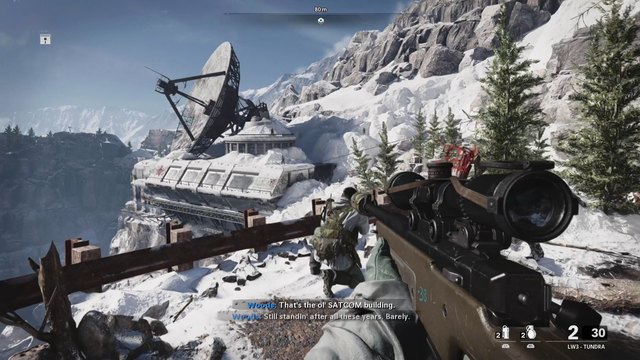 TIP: To avoid being spotted by the snipers, crouch or crawl up the slope on your right.

With no enemies in sight, make your way into the building.

Close to the entrance, you’ll find a body with a crossbow bolt sticking out of it. Shortly after, Mason will begin to see those infamous numbers flash before him.

Head to the left of the body to find a desk with a piece of evidence on it.

Walk towards Woods then make your way through the corridor, returning to the cold outdoors. Move along the narrow walkway and make a daring leap across the gap. Keep following the walkway which eventually leads to a room full of enemy guards.

TIP: Use the computer terminal as a handy piece of cover to pick off targets to limit the risk of being killed.

Take out as many enemies on the upper level as possible before advancing. Once the upper level is clear, clear up any resistance on the lower floor, and head through the door where another zipline awaits.

Once back on the ground, snipe the enemy on the top level of the building opposite. They have an RPG and can easily halt your progress through the mission.

Negotiate the other soldiers before ziplining across the ravine. In typical Call of Duty fashion, the daring descent doesn’t go to plan… 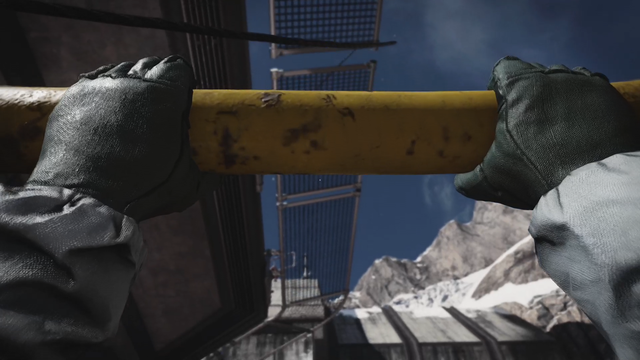 With no firearm to your name, you’re left with a combat knife as you try to evade alerting any of the guards. Head to the end of the walkway and climb into the tunnel.

Follow the tunnel all the way until you reach an elevator shaft. Climb through the broken part of the shaft which leads to a small path with a door at the end. Open it to reveal a new snow-covered section.

Move up the stairs then duck under the partially blocked doorway on the right-hand side. When you reach the tunnel, crouch before entering it in order to avoid being detected by any enemy soldiers in the area. Vault the ledge and take cover behind the pillar in front of you.

You’ll come across a couple of soldiers having a chat. Wait for one of them to mention the patrol finishing then move into the hallway and head left. You’ll come into contact with a group of soldiers walking along the tunnel in single-file. Sneak up behind them to silently kill each one, then grab one of the weapons they drop onto the ground.

Once all the soldiers have been taken care of, move deeper into the tunnel and move into the room on the left where you will find a locked weapons cabinet. (This triggers the optional objective of the mission.) Keep moving along the tunnel and turn left at the end.

In order to maintain a low profile, pick up a Reserve Bow. Walk straight ahead and make a left turn where you’ll find a snowy slope and another group of guards. Wait until they spread out before taking aim and eliminating the soldier at the back of the group. Make your way up the slope and take out the second guard before he enters the room.

Advance into the hall and make a right turn where you will encounter another guard. Let him move towards the end of the hallway before killing him.

With the first guard taken care of, three more guards will be on your left. Crawl along the floor towards the room on the right to avoid detection. When you’re in the clear, turn left at the end of the hallway and crouch next to the crate where you’ll be able to see into the well-lit room. Wait for a few seconds then use the bow to eliminate another guard. Move through the well-lit room and into another room where you will find the key to the weapons locker on the desk.

Head back the way you came from, keeping quiet in order to avoid alerting any of the guards. As you move through the tunnel, you will hear some guards talking about the weapons locker. As one begins to move, sneak up behind him to perform a silent kill then dispatch of the second guard in the same fashion.

If you complete a total of five stealth kills in the mission, you’ll complete the “Silent but Deadly” challenge. 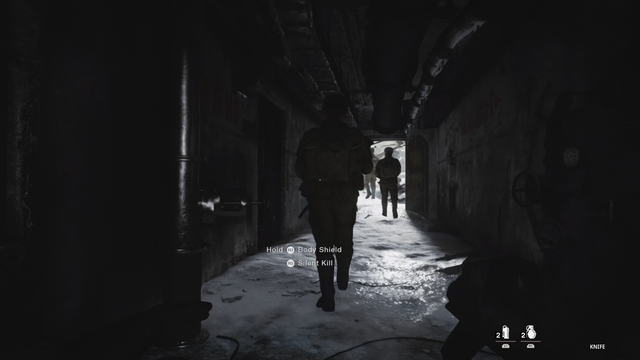 Use the key on the weapon locker to open it. This completes the “Your Worst Nightmare” challenge and also reveals the Redeemer weapon.

TIP: When firing, the Redeemer is extremely loud. If you want to keep silent, DO NOT fire it.

With the weapons locker opened, head back into the hallway with the broken glass panels.

At the panels, aim the bow through a small hole between the shards of glass to take out the guard. Then aim at the guard on the far left of the room, using the same gap in the window.

TIP: Don’t fire the bow through the glass. This will alert a large number of enemies blowing your cover.

A nearby guard will head to the noise made by his fallen comrade. Eliminate him as quickly as possible to avoid attracting further attention. As soon as the final guard has been taken out, Woods will radio in.

Make your way to the rear of the room and pick the lock. Head upstairs, through the gate and make a right turn.

At the end of the walkway, Woods will drop a light near your feet. This will allow you to climb up the ladder. Now reunited with Woods, follow him down the hallway into a room full of guards that he has successfully eliminated.

TIP: The next section of the mission is far from stealthy so pick up some weapons from the fallen soldiers in the room. 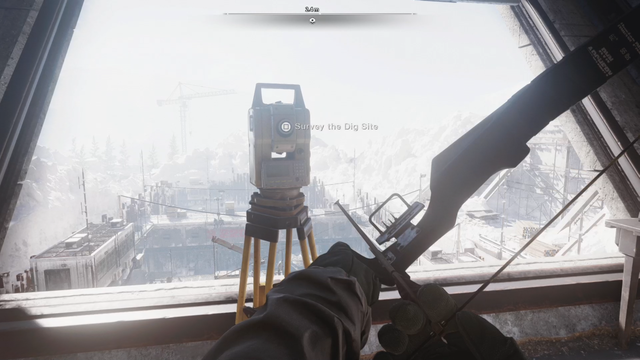 Access the scope to determine the location of the dig site where the mainframe is located.

Exit the scope and join Woods in the next room. Shoot the nearby crate with the Reserve Bow to obtain some smoke grenades. These will really come in handy in the next part of the mission. Head to the side of the room and slide down the zipline.

The noise made by the zipline will blow your cover so be prepared for a fight when you reach ground level.

Once the area is clear of any hostiles, Belikov will arrive in the helicopter to provide some additional support. Continue moving straight ahead, taking out the guards hidden behind cover. Pop a smoke grenade to conceal your approach then keep moving through the corridor.

TIP: Use the red barrels to clear clusters of enemies as quickly as possible.

Take cover from the gunfire by heading towards the right side of the room. Deal with the guards opposite your position then make your way towards the broken section of wall. Whatever you do, DO NOT HEAD OUTSIDE JUST YET!

Another wave of enemy soldiers is waiting outside, including someone controlling a turret. Turn your attention to taking out the turret before considering moving into the outdoors.

With the turret now offline, more enemies will converge on your location from the ziplines. Take them out and keep pushing down the slope, where you will find another zipline.

At the end of the zipline, Belikov will assist you in taking out the next batch of opposition. With the soldiers dealt with, slide down the hill towards the building.

Inside the building will be a locked cabinet. Use the weapons key from earlier in the mission to open it and receive some Health Stims.

Move to the right and head down the slope to another zipline. Use it to access the level above the mainframe.

Belikov will send down a winch from the chopper. Provide Woods with some additional cover and eliminate any guards trying to halt your progress. 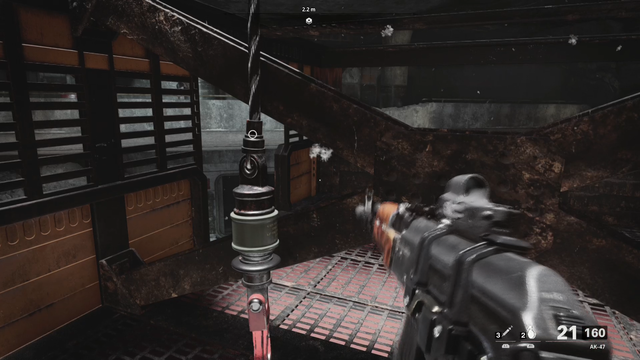 As you ascend, the room below will flood with several enemies trying to stop the extraction. Fire on the red barrels to take care of them with ease.

Use the side of the mainframe platform as a piece of cover while it spins and moves. When the last floor of the building is clear, you and Woods will make your escape, ending the mission.

How To Buy Perks In Outbreak