The Diablo 3 Season 22 start time is almost upon us and that means a whole new assortment of classes and builds to get stuck into.

Season 22 is known as 'Shades of the Nephalem' and whilst the new season is not due to start until Friday evening, some of the games most experienced players already have a solid handle on which classes and builds are worth playing.

That's thanks to the games PTR (Public Test Realm) which gives players an insight into the upcoming buffs and nerfs before it hits live servers on PS4, Xbox, PC or Nintendo Switch.

As we mention, an upshot of this pre-release testing - aside from sorting all those bugs and issues - is that it gives expert players like Rhykker, a prominent youtube and authoritative member of the Diablo 3 community, a chance to test builds before release.

That's why we have a fairly solid idea as to the Top 10 Best Builds for Diablo 3 Season 22.

If you want a proper deep dive, Rhykker has pulled together a video (above) which runs the rule over the best builds and classes.

So you'll also know which to avoid. 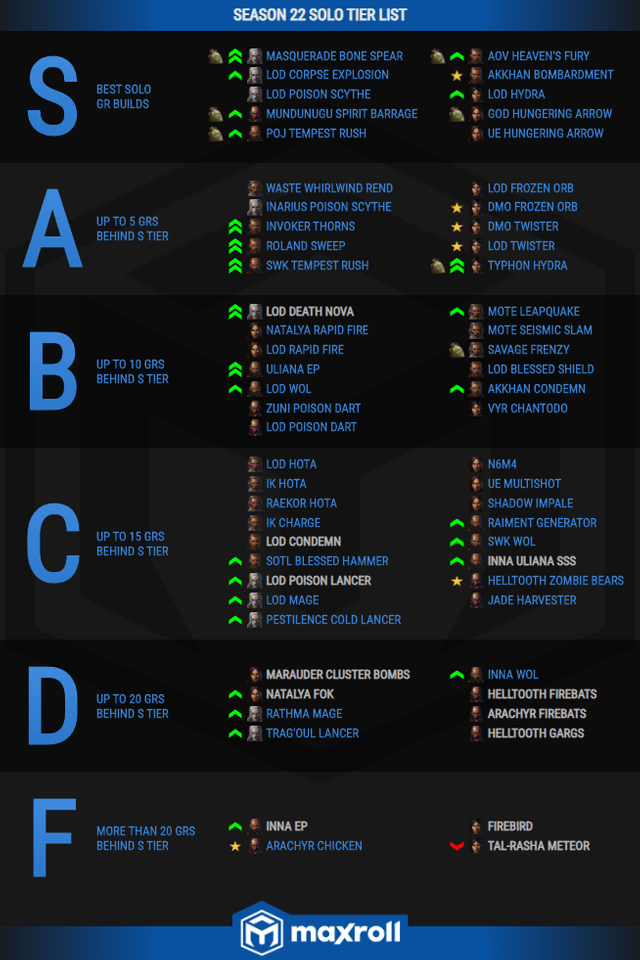 "Gameplay shown in video. All these builds are T16 (Torment 16) viable."

The video lasts 20 minutes, so it's a lengthy watch but does provide a comprehensive overview into the full tier list for Season 22.

If however, you want a quick bullet point overview of the best build for each class, we've outlined that for you below, too.

Follow the build links to maxroll.gg - a community resource site for Diablo 3 - who have teamed up with Rhykker to host all the builds, together with guides and information for every builds setup.