The current Fortnite season has less than two weeks left to it.

The next-season is bound to be one of the best yet, as we have more Marvel content to look forward to, along with the Winterfest 2020.

What will be left after the Nexus War concludes? Will Galactus consume the island? Are there more sponsored seasons coming in the future?

One thing is for sure, we are highly unlikely to get full patch notes for the new season.

Patch notes magically disappeared around Season X, and we have not seen full ones.

Instead, we get the creator patch notes which are a basic summary of some of the highlights of the new patch.

Well, with the release of V15.00; we are expecting a lot of changes, and we have all the notes.

It appears the following weapons have been added to Fortnite:

The downtime for the new season will run from 12:00 am EST to 4:00 am EST; so we should expect some sort of patch notes in the downtime between then! 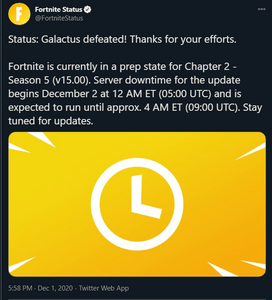 As of now, we highly doubt we are going to get full patch notes for the new season.

We can assume we will have to get all the news regarding all the additions via Fortnite leakers.

In the coming weeks stay tuned on social media accounts such as iFireMonkey and HYPEX; as they will be the go-to source for all the news.

But, when the new season releases; we will also be sure to let you know all the changes right here!

The season release patches are always some of the biggest.

Expect this one to be anywhere from 10 GB - 30 GB depending on much content is implemented for the new season.

Be sure to check back when we know more!