Infiltrate the base with ease with this walkthrough.

The latest chapter in the Black Ops series sees players thrown into the height of the Cold War with a brand-new campaign developed by Raven Software.

Black Ops Cold War is a direct sequel to the very first Black Ops game which released all the way back in 2010.

As the hunt for Perseus begins to intensify, your operator known as Bell is joined by Black Ops legend Frank Woods in the forests of Ukraine for the sixth mission named “Redlight, Greenlight.”

In this guide, find a full walkthrough of the mission along with some handy tips on how to complete it on Veteran.

Read More: Black Ops Cold War: Why Does My PS4 Controller Disconnect In Mission 2 and 3?

After apprehending Volkov in the previous mission, you head to Ukraine where Woods will join you in a bid to discover what the Soviets are plotting.

Follow Woods through the trees until you get a clear view of the base.

Now with a clear picture of the outside of the base, equip the camera and take a snapshot. When done, Woods will ask you to select a solider to take care of. Dispatch of the guard standing on the tower then quickly switch focus onto the two soldiers that jump out of the vehicle.

With the targets taken care of, vault the log obstructing your path and slide down the hill and to the front entrance of the base. 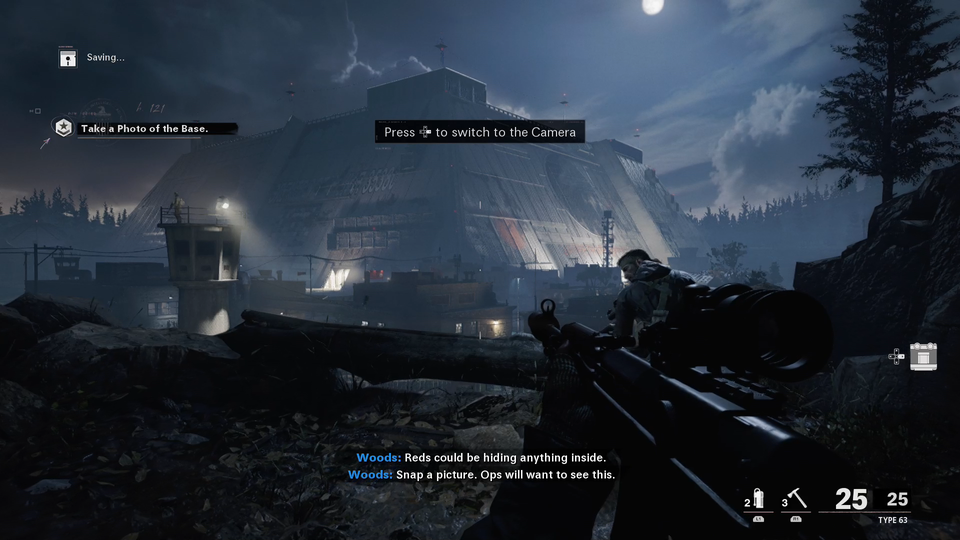 With no enemies in sight, take a look inside the guard house, and take a picture of the map hanging on the wall. This will trigger an optional objective where you will have to take photos of six maps throughout the duration of the mission.

After you’ve taken a picture of the map, head to the left and pick the lock before advancing to the building at the far end.

There will be a short staircase complete with a solider surveying the scene. Take him out with either the suppressed pistol or the tomahawk. With the soldier dealt with, sneak towards the boxes on your left. With the coast clear, advance inside the shipping container for some additional cover.

You’ll be greeted by a guard examining the area with a torch. Wait until he starts to move towards the right before making your next move behind the truck where another set of containers can be used for cover.

Read More: Black Ops Cold War: How To Turn Off Skill Based Matchmaking And Get Easier Games

TIP: Watch out for the tank that patrols the area. Wait until the light moves away from you before advancing.

With the light gone, head towards the marked door. Pick the lock and it will trigger a cutscene.

Once Woods appears, eliminate the guard behind the desk. Continue to follow woods through the doorway. As soon as you enter the doorway, there will be a small group of guards on the ground floor. Wait for Woods to give you his signal and pick them off using the silenced Type 63.

Advance down the long hallway and head through the door on the left. Look to the right and you’ll find the second piece of evidence on the wall.

Continue down the hallway to re-join Woods, who is waiting by a mysterious hatch. Follow him inside, where there will be a room full of arcade machines. 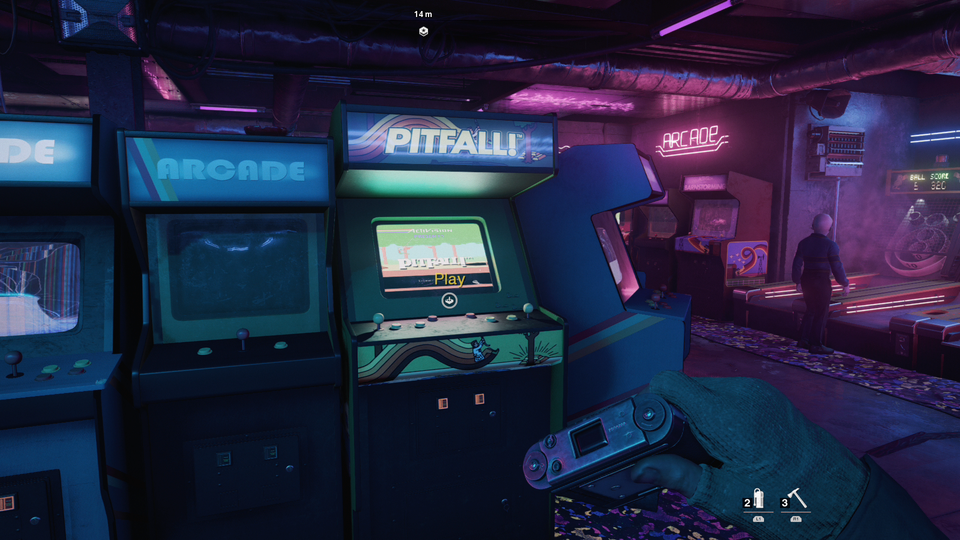 Head towards the front of the building where you will find a replica of an American town used for a Soviet training exercise. Equip the camera to take a picture and soon after, the exercise will begin.

Move quickly through the door on your right and up the stairs. A group of opponents will burst through the doors so take them out quickly before more appear on the upper levels.

Join Woods on the outer walkway and pick off the soldiers holding down the makeshift street. With the initial wave now clear, head to ground level.

At the end of the street, head right and up the staircase. Enter the room and on your left, another map will be on the wall. Take a picture of it.

Move back onto the street, dealing with another wave of resistance at the top of the slope. As soon as it’s clear, make your way up the slope and regroup with Woods.

Jump over the wooden panel and move towards the elevator. As you move closer, you’ll be hit with a stun grenade and by the time you recover, a Heavy soldier will have appeared.

TIP: To take down Heavy soldiers quickly, lay a constant wave of fire onto the head of the enemy. This will knock off their helmet. With the helmet knocked off, a couple of bullets to the head will be enough to take them down.

With the Heavy soldier dead, a handful of enemies will emerge from the elevator. Pick them off and enter the elevator. Head towards the left where a couple of soldiers will be standing outside the check-in station. Eliminate them and head inside to the Soviet computer terminal.

Access the computer and select Operation Greenlight. Print it off and a few seconds later, the system will shut down and sound an alarm, altering enemies to your location.

Leave the terminal as quickly as possible and head through the doorway to join Woods. Head to the right to capture another map towards the optional objective.

Follow Woods down the stairs back to ground level. An APC will unleash a wave of unrelenting fire onto your location. Sprint, crouch, or crawl to evade the oncoming fire. Just when you think you’re in safety, you’ll be met with yet another wave of opposition.

TIP: Pick up grenades from the box in order to clear out the area as quickly as possible.

When the enemies are no more, head downstairs and turn to the right. Enter the small room and look to the right for another piece of photographic evidence.

Advance through the room and head through the doorway. The APC will launch a second wave of fire. Utilise all forms of movement to avoid a trip back to the last checkpoint.

Regroup with Woods once again and push through the doorway leading to the stock room. A vertical sliding door will block your progress. Hit the button, opening the door, and revealing a room full of vehicles and enemies. 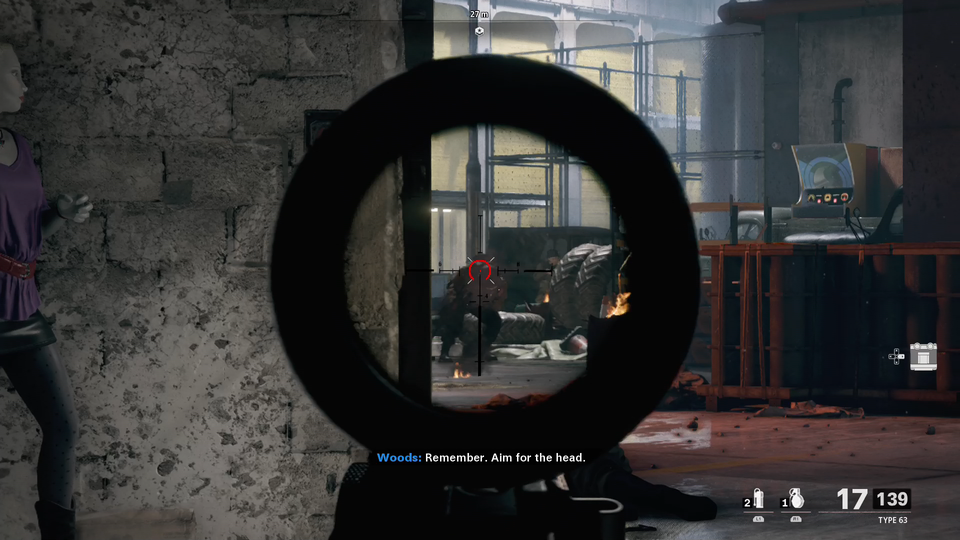 Several vehicles containing troops will appear. Shoot the red barrels to destroy them quickly before falling back to a safer location to pick off enemies with ease. There will be another Heavy soldier in the room so repeat the earlier process to dispatch of it.

Head up the stairs on your left and grab the CIGMA 2 rocket launcher to deal with any remaining enemies or vehicles. On the opposite side of the room is a small office where the sixth and final piece of photo evidence can be found.

By acquiring all six pieces of evidence, you will complete the “IMINT” challenge.

Head towards the APC and climb aboard the access the turret. As Woods gets familiar with the driving controls, shoot the enemies that emerge from behind while Woods puts the pedal to the metal.

While Woods navigates through the open area, focus your fire on the enemy APC. When that is destroyed, turn your attention to the foot soldiers lining the street.

As you enter the tunnel, switch focus to what’s in front, taking out any soldiers and more importantly, the two APCs that are blocking your way out. Shoot the APCs as Woods drives straight into them to escape the base.