Finding it hard to avoid the guards? Read our walkthrough to stay hidden.

The latest chapter of the Black Ops series drops players into the peak of the Cold War with an all-new campaign developed by Raven Software.

Black Ops Cold War is a direct sequel to the very first Black Ops title which released just over 10 years ago.

Black Ops legends Alex Mason and Frank Woods are hunting for the enigmatic Perseus, a Soviet spy believed to be back in play and on the hunt for intelligence belonging to the United States.

The fifth mission of the campaign is the “Brick In The Wall”, where you go on the hunt for Russian gangster Anton Volkov that has links to Perseus

In this guide, find a full walkthrough of the mission along with some handy tips to complete it on Veteran.

Brick In The Wall Walkthrough

The mission begins with you and Adler on-board a Berlin subway. Follow Adler to the very back of the final carriage. Once you’re there, jump out of the carriage and into the darkness of the underground tunnels.

Move off the tracks as quickly as possible in order to avoid the oncoming train. Jump over the partition on your left to regroup with Adler.

TIP: Utilise the oncoming train to get past a group of soldiers that are on the right-hand platform. 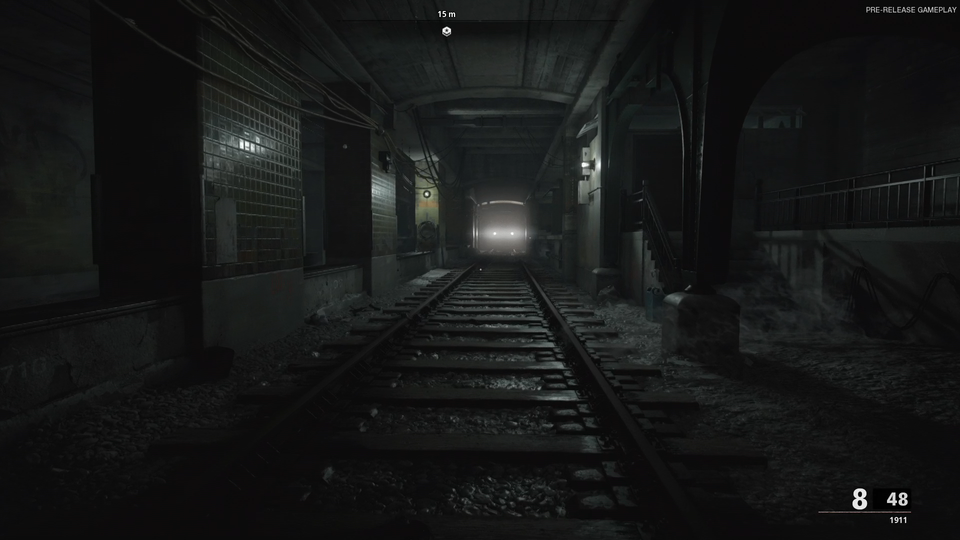 Once the train has made its way past and the guards are nowhere to be seen, two more guards will appear in front of you. Approach the guard closest to you from behind and use him as a body shield. Burst through the double doors and load a frag grenade inside your shield to clear out the room with ease.

Grab a secondary weapon from one of the fallen soldiers but be aware that it will not be suppressed. Continue to follow Adler through the tunnel until you reach a ladder. At the top of the ladder, open the grate to return from the underground.

After you’ve helped Adler from the ladder, you’ll be greeted by a couple of police officers wondering what you’re doing. After declaring that you and Adler are under arrest, move behind Adler to grab his gun and shoot the officer on the left.

To avoid anyone finding the bodies, carry them and place them in the shadows then continue to follow Adler as he enters a nearby building.

Once you’ve navigated through the buildings, you will be on the rooftop alongside Adler.

TIP: Avoid the spotlights that light up the streets. If you’re spotted by one of those, it’s back to the previous checkpoint. 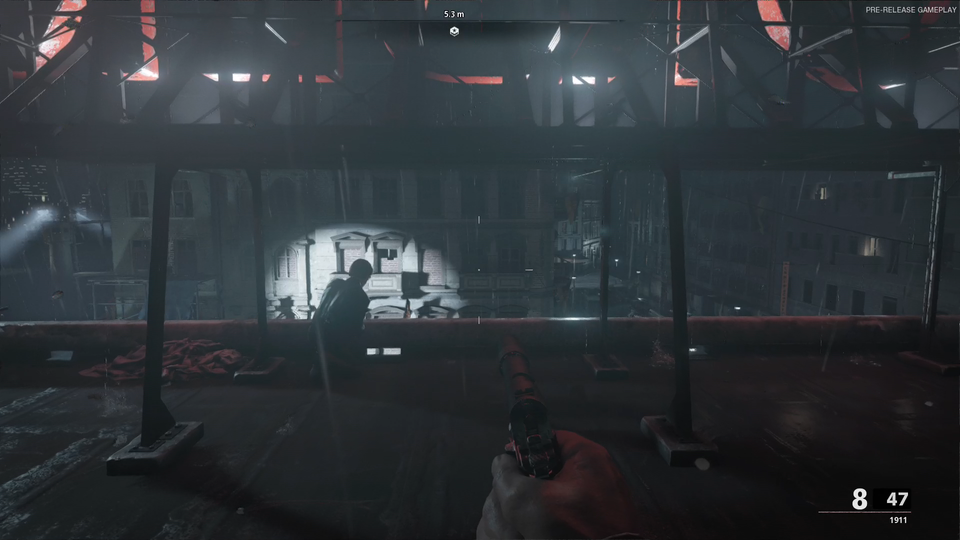 After successfully making it past the spotlights, join Adler underneath the large neon sign and access your camera.

As you look down at the street below, you’ll spot a moustached man holding a briefcase. Keep your eyes on him until he enters the bar at the other end of the street.

With Kraus inside, exit the camera and follow Adler off the roof and back onto the street.

Avoiding any suspicion, make your way into the bar. Towards the rear of the building, there will be woman sitting on her own with a blue umbrella propped up against it. Take a seat at the opposite side of the table.

After informant Greta reveals that Kraus is sitting just a few tables away, activate the listening device disguised as a pack of cigarettes. When activated, Greta will begin to speak.

After a few minutes of conversation, Greta reveals that one of her informants was captured by the authorities. As an optional objective, she asks you to either silence or rescue them. After accepting Greta’s request, someone informs Kraus that he was followed into the bar. While two guards enter and Kraus makes a swift exit, head to the bathroom to make your getaway.

Open and close the bathroom door. On the right of the sink is a small window. As the guards begin to knock on the door, exit the bathroom by climbing out of the window and into the alleyway.

After that close call, it’s time to join up with Lazar. This part of the mission heavily relies on stealth so it is important not to alert the soldiers patrolling the streets.

Now on your own and in the alley next to the bar, head up a nearby staircase and pick the lock of the door.

TIP: Slowly move the right analogue stick until the latch begins to move. Once it does, hold it there and the lock will eventually open.

Once upstairs, you will spot a soldier looking around. Dispatch him with a single bullet to the head and continue working your way through the building towards the outside. Now on a balcony with minimal cover, crouch and move to the left and jump back down onto the street.

Take out the guard that will be directly in front of you to continue moving.

If you want to complete the optional objective for the mission, this is the time to do so.

Head to number 732, pick the lock, and slowly make your way down the stairs. Eliminate the guard at the communications desk, then repeat the process on the guard on your left. Once you have reached the bottom of the stairs, there will be a guard sleeping on the job. Take him out and you can now talk to the informant known as Richter.

Evidence: On the table to the right of Richter, a piece of evidence to assist with the side-missions can be obtained. 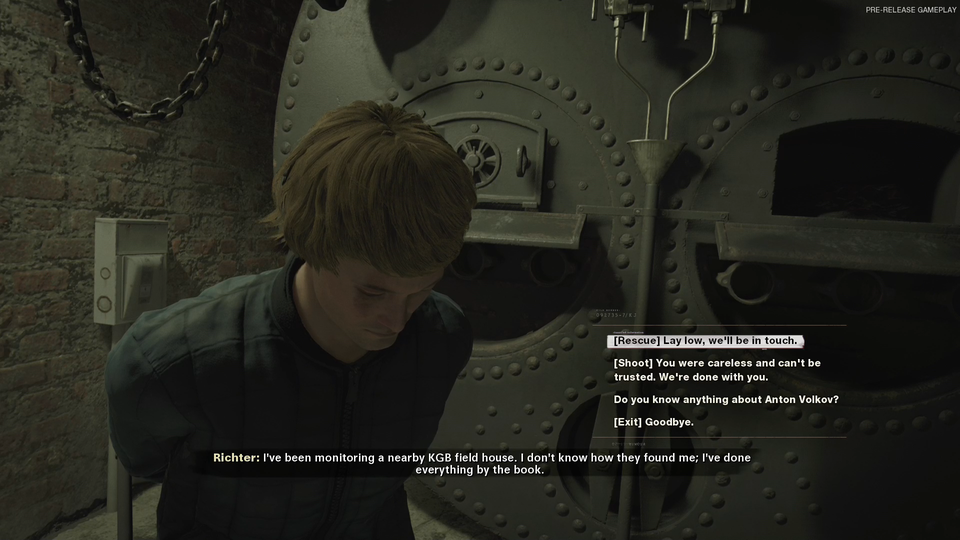 Ask Richter some questions regarding Volkov and how he ended up as a prisoner. When done, decide whether he should walk free or if he’s too much of a liability…

If you decide to set him free, you will complete the “Big Hearted” challenge. The communications desk at the bottom of the stairs contains Richter’s dossier. Read it to complete the “Red Connection” challenge.

With Greta’s request fulfilled in one way or another, it’s time to meet Lazar. At the entrance of number 732, there’s a red ladder that leads to some scaffolding. Sneak across the scaffolding and jump off the other side without alerting any soldiers.

Head towards the well-lit door and Lazar will be waiting for you to arrive. Rendezvous with Park at the front of the building.

After tracking Kraus back to his apartment, it’s time to plant a tracker inside the mysterious briefcase. To begin, head across the street and into the apartment building. There are three guards close to the staircase so ignore them and make your way upstairs.

At the top of the stairs equip the tranquiliser gun, pick the lock and enter apartment 27. When Park makes a phone call to distract Kraus’ wife, make your way up the stairs.

TIP: When you hear Kraus speaking, remain on the stairs as he walks past into another room.

To avoid being spotted, dart into the room on your right-hand side.

Evidence: The first room on your left contains another piece of evidence for one of the side-missions. It can be found in the end table drawer on the right side of the bed.

With the evidence secured, make your way into Kraus’ office. It’s the only room without a door so it’s easy to find.

Turn on your black light and begin examining the wooden panel which will reveal a handprint. The next marking is under a painting on the right of the wooden panel. Press both of them in quick succession to enter Kraus’ dark room. 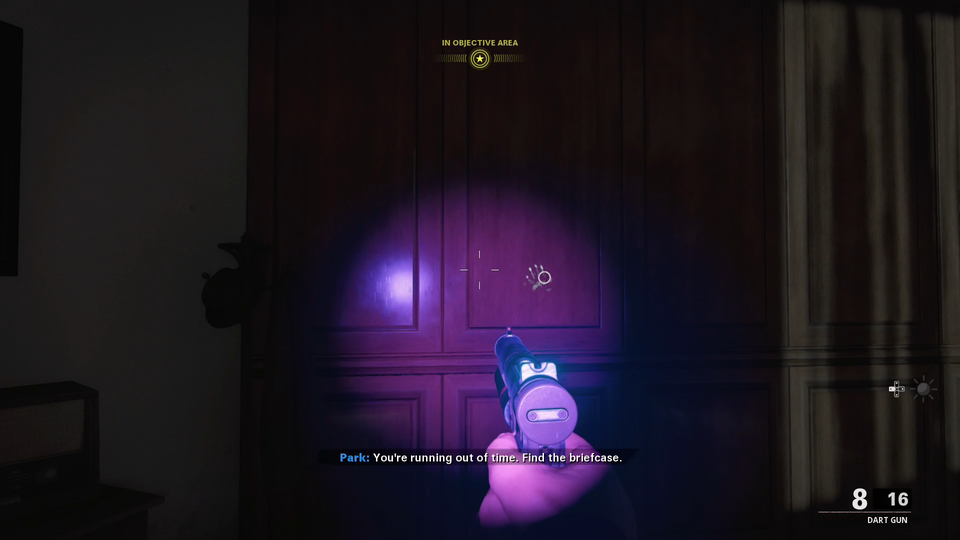 The room is pitch black so head to the middle of the room to turn on the light. The briefcase is on the table in front of you. You open it and discover pictures of a nuclear device which has bene transported through Berlin. Quickly plant the tracker.

After the tracker has been planted, you hear muffled screams coming from a cupboard. Inside is Greta with tape around her mouth. Before you have time to do anything, a cutscene is triggered and a masked figure knocks you unconscious.

When you come around, you find yourself tied to a chair with Greta next to you. Volkov tries to get some answers out of you but you resist. While a soldier deals the killer blow to Greta, your teammates drop in from the roof to save you.

Park helps you from your feet and hands you an MP5 to battle through the warehouse.

TIP: Avoid the red gas cylinders on the upper and lower levels of the warehouse. They can lead to a somewhat explosive ending…

Once the warehouse is clear, a flashbang will pop off disorienting you. There’s enough vision to eliminate the two remaining enemies before you corner Volkov.

Here comes another tricky decision. Do you shoot him? Or do you capture him? If you decide on capturing Volkov, you will complete the “Friend of the Crown” challenge but the decision is entirely up to you.

Is Genshin Impact On The Nintendo Switch?