Sony PlayStation has today released its first post-launch system update to the PS5.

While the console had received several updates prior to launch for those testing the machines, today's update marks the first for those who have the console in general consumption.

With the launch of the PS5 this week in other territories including the UK, Europe and Middle East, it makes sense that the company would release a new patch to address any launch day niggles.

It requires 866mb of space, assuming you've not filled your PS5 already, and like we've seen previously the patch notes from the company are intentionally vague.

At present all players have been told is that the update “improves system performance.”

There is, however, a strange snazzy QR code on the console screen this time around which is said to take users to a website that displays "all the features that are available" 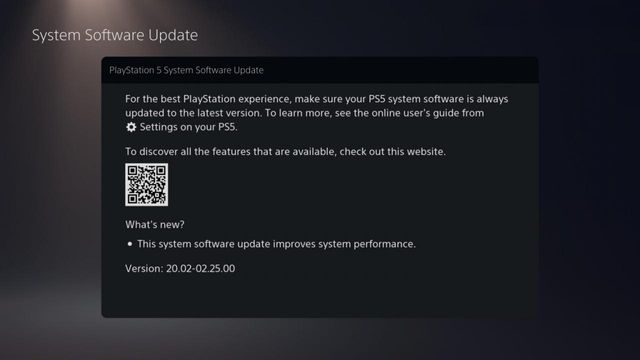 This takes users to the web address: www.playstation.com/morefeatures.

But that is currently auto directing to the default PS5 homepage.

So it's impossible to say, for now, exactly what the update has fixed.

That being said, there's been plenty of little bugs and issues since launch which could be getting corrected. From games automatically downloading PS4 versions as default, or issues with the PlayStation 5 rest mode.

We've no doubt this update is doing some heavy lifting to correct some of the key errors noticed by launch day adopters.

Stay tuned, hopefully, we'll have more details this afternoon as more players in the United States (who actually have the console) tell us what has changed (if anything).