Fight alongside the Brotherhood

The Brotherhood of Steel are marching on Fallout 76, and with their arrivals come the Steel Dawn update in December.

The Brotherhood are one of the game series’ most iconic factions, and we can’t wait to see what they have in store for the early Fallout universe.

There are a bunch of new characters dropping into the game with the Steel Dawn Update.

Whether they be friend or foe, we’ll let you know about every new character you can interact within Appalachia come December!

When does Steel Sawn Release?

December 1, just a couple of weeks away at the time of writing!

The update will also arrive just in time for the Holiday update too, which will almost surely also include some Steel Dawn flair.

Check out our Community Calendar guide now to see what other in-game activities you should be looking out for, like some double XP and S.C.O.R.E. events!

Read More: Steel Dawn Quest Fallout 76 - Everything We Know About The Quest in the Steel Dawn Update

We’ll obviously be meeting a bunch of new Brotherhood characters when the update drops soon.

Three members of the Brotherhood of Steel, Rahmani, Shin, and Valdez, are all arriving  as seen in the trailer below.

They seem to represent the core values of the Brotherhood of Steal, strength, protection and research.

We can’t wait to see what these characters will throw our way when Steel Dawn drops!

Unfortunately, this update likely won’t just give us new friends, but enemies too.

The location is referenced in the Rahmani, Shin, and Valdez teaser, and so will likely be a central focus.

Not only for quests but also new characters to meet!

Many of the miners will likely have been vaporized, but we can expect to see some survivors and any automatons that survived the Great War.

We’ll probably have some new monstrous threats in this area as well, who have now turned the mines into their home! 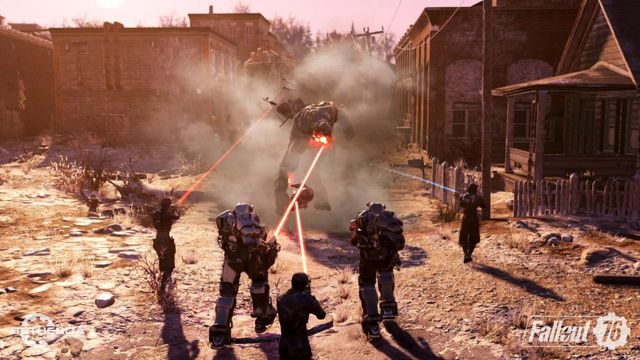 Team up and Slay with the Brotherhood of Steel!

We can definitely expect some strong resistance given the strong armaments promised by the Brotherhood!

Read More: Who are the Brotherhood of Steel? Steel Dawn Update Fallout 76

Given the Brotherhood’s past in Appalachia, we may also have to fight against survivors already in the area.

Much like in Fallout 4, as we progress further along the Brotherhood questline, we may have to also face off against old allies, though this is speculation for now.

As we learn more we’ll be sure to update you!

Remember to prepare for December 1 as best as you can, and get ready for Season 3 arriving in December too.

Stay safe out there in the Wasteland!