Who are the Brotherhood of Steel? Fallout 76 Steel Dawn Update, Explained

The Brotherhood of Steel are marching on Fallout 76, and with their arrivals come the Steel Dawn update in December.

The Brotherhood are one of the game series’ most iconic factions, and we can’t wait to see what they have in store for the early Fallout universe.

Though, if you don’t know who they are don’t feel embarrassed, we’re here to help you out!

Read our little history lesson below so you can know all you can before the Steel Dawn update December 1!

Who are the Brotherhood of Steel?

The Brotherhood of Steel has existed in one way or another since the beginning of the Fallout Series.

They are a techno-religious group who are dedicated to maintaining control over technology in the Fallout universe’s America.

Their origins are rooted in the United States’ Military and a government-sponsored scientific community who were based in the Mariposa Military Base.

Read More: Steel Dawn Update Fallout 76: When are the Brotherhood of Steel arriving in Fallout 76?

Before the Great War, the nuclear war that destroyed much of the world, US scientists created a virus known as the FEV (Forced Evolutionary Virus).

From the newly constructed Mariposa base, they began testing on human subjects in January 2077.

By October, the security detail assigned to the base learned that they were testing on military prisoners.

Angered by this, a rebellion group spearheaded by Captain Roger Maxson, interrogated and executed scientists.

The rebel team refused to believe the experiments were government-sanctioned.

Then, on October 23 2077, the Great War began and Mariposa lost contact with the outside world. 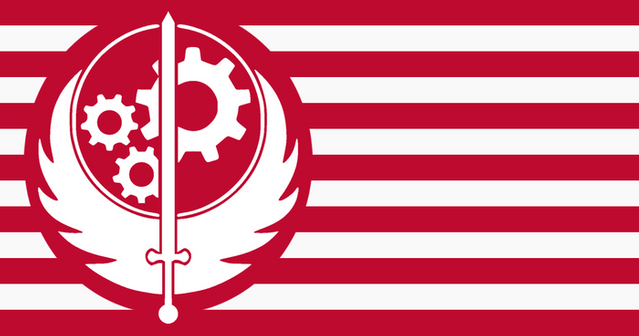 The First Brotherhood of Steel Flag

Though the inhabitants of the base were protected and just two days later, they ventured out into the new world.

Their bunker would become a refuge for any survivors, particularly war veteran who survived thanks to their Power Armour.

Though the death and devastation, the loss of their families and friends and the faithlessness in the Government began to creep through the survivors.

To help them, Maxson created new imagery to replace the Stars and Stripes, new ranks and new mottos to stand by.

By giving people new hope, Maxson hoped to maintain morale and create a new order amongst his people.

Read More: Steel Dawn Characters Fallout 76 - Everything We Know About The New NPCS, Friends and Enemies in the Steel Dawn Update

Paladin Lizzy Taggerdy was initially sceptical of his methods, but upon her arrival in Appalachia, she eventually understood Maxson’s vision.

Though eventually, she would fall, and the Brotherhood would abandon the area.

That is until now, where a new faction is coming back to claim the land once again!

The Brotherhood of Steel survives well over 100 years into Fallot 4, so we likely won’t wipe out the Brotherhood in 76, but it will certainly be interesting to see what happens next!

Remember to prepare for December 1 as best as you can, and get ready for Season 3 arriving in December too.

Stay safe out there in the Wasteland!