FIFA 21 TOTW 8 LIVE: Team Of The Week 8 Squad, Predictions, Release Date, Countdown, Leaks, How To Get In-Forms And Everything You Need To Know

Team of the Week is back for an eigth week in FIFA 21 Ultimate Team and it is live TODAY!

With the international break coming to an end this week, a selection of players rose above the rest as top performers. These players will receive a special upgraded In-Form card to reflect their performance.

TOTW 7 was saved by a few key highlights including TOTW Messi, but week 8 hopefully be much improved so your efforts in the Weekend League won't be wasted.

FIFA 21's eighth TOTW will be revealed on the 16th November at 6pm GMT.

They will then be removed from packs at 5.59pm GMT the following week (18th November). 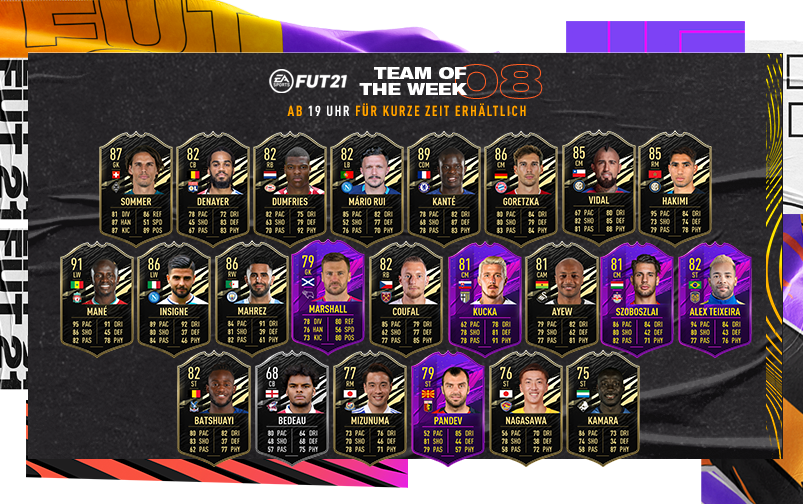 Team of the Week 8 Prediction

TOTW 08 features a decent selection of stars who performed well during the International break, as well as 3 potential Ones To Watch upgrades to look out for! 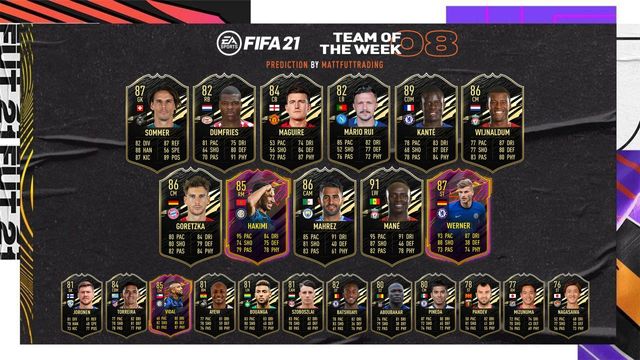 Despite not keeping a clean sheet against Spain, Sommer put in an awesome display, saving 2 penalties in Switzerland’s 1-1 draw with the European powerhouses, enough to guarantee his TOTW 08 inclusion.

The first of 2 Dutch players to make it into our prediction, Dumfries made 2 assists in the Netherlands’ 3-1 win over Bosnia on Sunday, and with a relatively small pool of defenders to choose from, could make it in.

Maguire looks to be a shoe-in for TOTW 08, getting 1 goal and keeping a clean sheet in England’s international friendly against the Irish.

Rui looks like he may make it into TOTW after assisting twice in Portugal’s 7-0 thrashing of Andorra in an international friendly last Wednesday.

Kante put in a MOTM performance as he scored the winner in France’s 1-0 UEFA Nations League win over Portugal. Seeing as this was a marquee matchups tie, we’d expect an IF for his impressive contribution!

Wijnaldum bagged 2 goals in the Dutch teams’ 3-1 win over Bosnia in the UEFA Nations League and will be enough to get his first IF card of FUT 21.

Yes, another CM, and the first of two Germans that will make our prediction from their 3-1 UEFA Nations League win over Ukraine. Goretzka grabbed 2 assists and an impressive match rating.

While Ziyech may have grabbed 2 goals in Morocco’s 4-1 Africa Cup of Nations Qualifier, his inclusion in TOTW 06 means that Hakimi will take the IF after 1 goal and 1 assist in a 4-1 win.

A tasty little position change here, with Mahrez playing as a CAM in a 3-1 Africa Cup of Nations Qualifier win over Zimbabwe in which he scored 1 and assisted another.

While Mane only grabbed 1 goal and 1 assist in Senegal’s 2-0 win over Guinea-Bissau, with somewhat limited higher tier attacking options, he may just make it into TOTW 08.

Timo will be the headliner OTW card in TOTW 08, after scoring twice in Germany’s 3-1 win over Ukraine in the UEFA Nations League.