Black Ops Cold War has now released all over the world.

Not only are players checking out the latest Call of Duty title, but Warzone appears to be more popular than ever.

With the integration happening on December 10th, with the release of the first Cold War season; there is a lot in store for players.

This week also saw the release of the Xbox Series X/S, and players are having a blast on Warzone with their new hardware.

So much so, they have reported double the FPS they were getting on previous generation consoles.

Here are the details!

It appears since the last Warzone update, which was the day of the Xbox Series X releasing; that Microsoft has changed the listing of Warzone.

The store listing previously did not say it supported up to 120 FPS, now it does along with '4K Ultra HD'.

Check out the image below from the store listing: 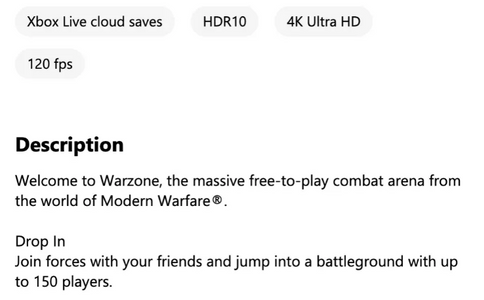 This is essentially double the FPS that the Xbox One supported for Warzone, and this was one of the large selling points of the new console.

Warzone is a heavily demanding game on your consoles internals, and at times when the game is getting hectic; the FPS is bound to dropl.

But, for the most part it appears most players are reporting they are getting around 100 FPS during most of the game.