Is POTM Sonny Worth The Coins?

Being the first big untradeable player SBC of the year, and a very desirable player, there’s plenty of debate as to whether Son will be worth completing at this early stage of the FUT cycle, so we’ve undertaken the task of reviewing him to give our verdict as to whether he’s one to go for, or one to avoid! 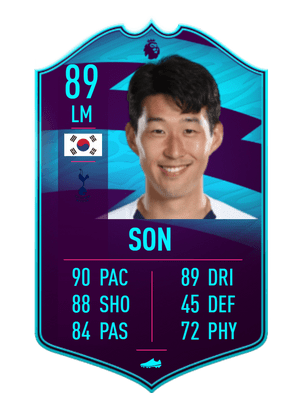 To view the cheapest solutions for Son’s POTM SBC, be sure to check out our solutions guide here.

Son POTM Review - Is He Worth It?

So then, at 600,000 coins as an untradeable card, the big question you’re wanting answered is, is Son worth it?

To answer this question, we’ll break it down into a number of parts, including the untradeable card commitment, his best positions, in-game performances and other alternatives.

Being an untradeable SBC, once you sink your coins into Heung-Min Son, you won’t be able to get them back, and at 600,000 coins to complete, he’s not a cheap SBC. Before completing, you’ve got to consider if Son is going to be a focal point of your team for the long term, or if you’re going to want to use other players (e.g. Neymar/Mbappe/Mane etc) in attacking areas.

In a few weeks time, if you decide that you want to change your team in a way that doesn’t feature Son, you’ve sunk a lot of coins into a super sub.

While Sonny may be set as an LM naturally, his best positions in-game are without a doubt in central areas.

We tried out his card as both a CAM and an ST, due to his awesome playmaking abilities, slightly taller build and of course his 5* Weak Foot ability.

On the wing, while he’s certainly not slow, there are faster winger options that are slightly more agile and threatening.

PACE: Fast, But Not The Fastest

One thing that we definitely noticed about Son is that while he’s quick, he’s certainly not the quickest Premier League attacker that you can get into your side.

Perhaps this is why we feel he’s best deployed centrally than as a winger, as players such as Rashford and Mane are far better at bursting past the typical FUT full-backs of Semedo, Walker and Mendy than the Korean.

If he can break away from CBs, he’ll more often than not be able to take chances, however, you’ll notice that it’s not as easy to burst clear as it would using someone like Werner, Rashford or Mane.

Arguably Son’s best trait has to be his 5* Weak Foot coupled with his awesome shooting stats.

His 90 positioning, 88 finishing, 90 shot power and 92 long shots and all-important 90 composure allowed us to be confident in front of goal with him, and coupled with his 5* weak foot means that wherever he is in and around the box, he can be a threat.

Furthermore, don’t sleep on his finesse shots, as Sonny does possess the all-important Finesse Shot Trait, meaning he can curl them in from around the 18 with relative consistency.

One thing that I was somewhat let down by with Son’s card was his dribbling and overall responsiveness in-game. Being 6’0” does lend himself more towards the clunky side, and starting with only 80 Balance doesn’t necessarily help in some of the more sluggish gameplay situations.

Definitely consider applying an Engine chemistry style boost to increase his balance by 10 and agility by 5, as well as his dribbling by 10 to make him turn a little bit quicker in an around the box to take full advantage of that 5* weak foot.

PHYSICAL: Good, But Not Incredible

Having only 72 physical and only 67 strength in-game doesn’t exactly make the Korean a one-man wrecking ball in the attack. We found he was frequently getting pushed off the ball by the regular FUT CB pairings of Varane, Gomez and VVD, however, being 6’0’’ he was able to occasionally hold his own in midfield battles and out wide against shorter full-backs.

One aspect of Son’s game that was a very pleasant surprise was his ability to play make as well as being the sole goalscorer, something we found when we put him into a slightly deeper CAM role.

While he’s not quite Xavi and Pirlo esque, his 87 short passing, 89 curve and 87 vision were a real treat to have, with Son able to consistently find impressive through balls out wide and through to the ST.

His 5* weak foot was also a big help, being able to receive and give passes on both sides in tight situations, making him a real asset to the side in an advanced midfield role.

We can definitely recommend completing Heung-Min Son’s POTM SBC, however, given the price of the SBC, there is a big IF.

Consider completing him IF you’re a big fan of Heung Min Son and you can see yourself running a Premier League team in FUT for the foreseeable future.

It’s unlikely that we’re going to be seeing many Premier League wingers and attackers that will massively surpass his quality over the next month or two, so he has a good amount of longevity in a Premier League team.

Avoid completing him IF you’re the sort of player that wants to rock a more meta team with the likes of Neymar and Mbappe. While Son is good, he doesn’t match up to the level of these higher-end gold cards, so if you’re someone looking for the best of the best, then Son is probably a player to avoid!