FIFA 21: Alex Sandro Road To The Final SBC Cheapest Solution For Xbox One, PS4 And PC

Alex Sandro has received an SBC in FIFA 21's Ultimate Team as Road To The Final cards returns to FUT!

The veteran Brazilian full-back has been a go-to left-back choice in Serie A for some time, but a severe downgrade to his nerf has left him out of favour.

This special card will be upgraded each time Juventus progress through the knockout stages of the competition.

The SBC will go live on the 13th November at 6pm GMT. 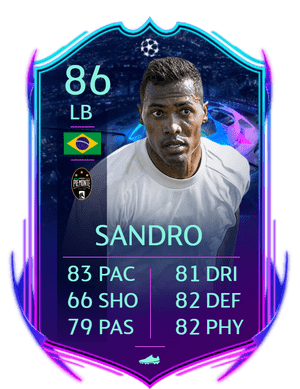 To get this Alex Sandro Road To The Final card you will likely need to submit the following squads:

For Top Form, using a combination of Serie A players should get the job done.

You can potentially upgrade to an 85 rated player for a few thousand more and save coins on other players.

With Tactical Emultion, you'll need to invest in a number of 85 cards and a few 87s to save money. You could potentially grab an 88 or two to save even more money.

So is it worth it? This card will definitely get some upgrades down the line if Juventus can continue to perform and get some good draws, but I feel that two upgrades is probably the maximum.

That won't necessarily make Sandro the best card for teams as his pace puts him behind many other choices as it is.

He would make for a great centre-back on 7 chemistry or even a substitute CDM - but maybe not for that price.