Conquer your opponents with the ultimate FFAR 1 loadout!

The release of Call of Duty: Black Ops Cold War has seen a range of new and returning weapons added into the multiplayer weapon arsenal.

One of the newest additions to Black Ops Cold War is the FFAR 1 Assault Rifle, and for some Call of Duty veterans, they may spot that this particular weapon resembles one of the strongest ARs ever seen in the franchise.

The FFAR 1 shares an uncanny likeness to the Famas Assault Rifle that appeared in the first Black Ops Game ten years ago, and after a few games, it certainly packs a similar punch to its predecessor.

With so many attachments to equip on this beast of an AR, what exactly is the best loadout?

Unlocked at Level 40, the FFAR 1 is the final Assault Rifle to unlock in Black Ops Cold War.

Armed with an extremely high rate of fire and a quick reload speed, the rifle can put up a strong fight against SMGs at close range.

But with just 25 bullets in the magazine as standard, you may find yourself reloading more often than getting stuck into the action.

This combination of attachments turns the FFAR 1 into the perfect all-purpose rifle.

The choice of magazine increases the ammo capacity enough to reduce the need to reload on such a regular basis while the grip and stock increases aim walking movement speed by a whopping 80%. 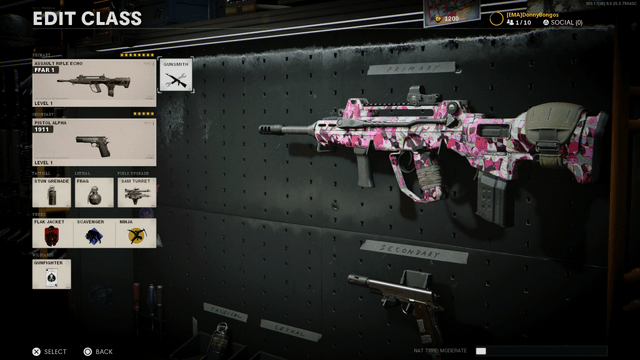 The FFAR 1: The best AR in Black Ops Cold War?

The 1911 pistol is extremely strong regardless of which attachments have been equipped.

This combination, increases hip-fire accuracy alongside an increase in aim down sight speed, enabling you to quickly react to an enemy when switching to a pistol is the best option.

It is extremely hard to evade a perfectly cooked frag grenade and there’s very few things more satisfying than scoring a kill after lobbing a grenade halfway across the map!

When thrown at an opponent, stun grenades slow and disorient them which makes them easy pickings for the FFAR 1.

The SAM Turret automatically targets and fires missiles at any enemy scorestreaks in the air.

With this loadout lacking the ability to deal with any scorestreaks, the SAM Turret helps clear the skies and is a solid way of earning some additional score on top of playing the objective and scoring kills.

By selecting these three Perks, it offers a solid balance when in amongst the action. Flak Jacket increases explosive resistance, Scavenger decreases the chance of completely running out of ammunition, and Ninja quietens footsteps when sprinting, allowing you to navigate the map and get behind enemy lines with ease.

By selecting Gunfighter as the wildcard, you can equip a maximum of eight attachments onto the FFAR 1 to create a version to suit every single style of play.