Want to dominate at long-distances? Look no further!

The release of Call of Duty: Black Ops Cold War has seen a range of new and returning weapons added into the multiplayer weapon arsenal.

One of the weapons returning to the Black Ops series is the AUG. The weapon first appeared as an Assault Rifle in the very first Black Ops title which released in 2010.

For Black Ops Cold War, it has been moved into the Tactical Rifle weapon category.

With such a wide variety of attachment combinations to choose from in the Gunsmith, what exactly is the ultimate AUG loadout?

Unlocked at Level 28, the AUG differs from its Black Ops predecessor in numerous ways.

Armed with a burst firing mechanic and high levels of damage, the AUG is hindered by slow mobility levels and relatively high levels of recoil which can be sometimes difficult to control.

Despite its drawbacks, it is one of the most effective weapons to use at longer distances, giving players the ability to eliminate a target with just a couple of accurate bursts.

This particular combination of attachment decreases the recoil to much more manageable levels, making it much easier to control when attempting to engage in a target at very long distances.

The barrel increases the damage range by an impressive 100% while the additions of the Field Tape and Tactical Stock drastically improve mobility. 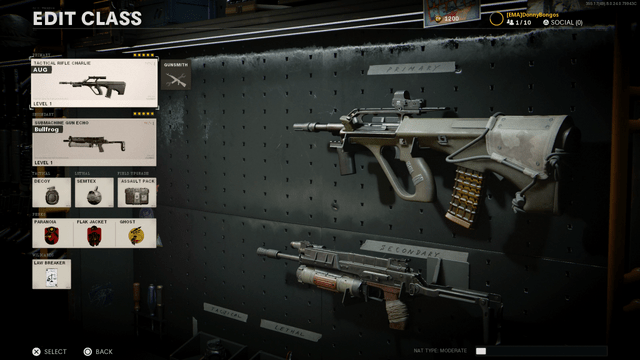 The AUG is deadly at long-distance

The Bullfrog sub-machine gun comes with a 50-round magazine and a damage output that can make it extremely dangerous in close-quarters scenarios.

The AUG can often be ineffective at closer distances, and having the Bullfrog in the back pocket, adds some much-needed versatility to the loadout.

What sets a Semtex apart from the rest of the lethal equipment is the ability to stick it to any surface on the map.

Think there could be an opponent hiding in a corner? Throw the Semtex on the ground to determine their location and head towards it for a quick and easy elimination.

The Decoy is perhaps the most under-appreciated piece of Tactical equipment in a Call of Duty game.

To make the best use of it, throw it into an open space on the map to draw out an enemy, and pick them off with minimal effort!

The Assault Pack gives you the opportunity to earn some bonus score from the eliminations that you secure. It can be a great help when attempting to earn Scorestreaks that are higher up the list.

This Perk combination is ideal when sitting back and dealing damage at long-range. Paranoia activates a vision pulse when an enemy outside of your view has spotted you, Flak Jacket maximises your resistance to explosive equipment, and Ghost conceals your location from Spy Planes when moving.

To make the most of Ghost, relocate after every few eliminations in order to prevent the enemy team from determining your location.

By selecting Law Breaker as the Wildcard, it enables the ability to select two Perks from the same category and also allows you to select any weapon as a secondary, making this class extremely versatile in nearly all imaginable situations.