It's all about control...

While Valorant is looking at how often they update the game, they may be doing some behind the scene changes still.

A hot topic for Valorant is whether the game may ever come to consoles.

There may well be some good news for both console and PC players...

With the next-generation of consoles now going live, it's not out of the realms of possibility.

Especially as other games, such as League of Legends Wild Rift, is being created for Consoles.

League of Legends Wild Rift is a ported version of the hit MOBA title for PC.

While we have no idea whether the game will arrive on consoles, dataminers have spotted assets for controller support in the files. 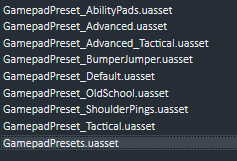 The left picture appears to show gamepad presets - which does raise the question of whether all buttons will be customisable.

The right picture also displays the Xbox One. It doesn't confirm whether the PS4 controller is supported, but it can be assumed it will.

It also begs to be asked whether Xbox Series X and Xbox One controllers are supported.

Either way, once we hear more we'll keep you posted.