Black Ops Cold War: How To Delete Multiplayer on PC

Black Ops Cold War's gameplay is out in the wild and Treyarch's next game looks incredible.

Now, we are less than 24 hours from the game releasing all over the world.

PC players are especially excited for this year's title; and they can now pre-load the game onto their hard-drives.

A method that was implemented towards the tail-end of Modern Warfare was the ability to select which game modes you want to be installed.

This feature is back for Cold War!

Here's how to save space by not installing the multiplayer!

This is due to the fact that Warzone is not yet implemented.

The game as of now is only around 85 GB, but we can assume this will go up to 200+ GB once Warzone is integrated over on December 10th.

The method to not include the campaign on your install is the same as it was for Modern Warfare.

Here are some steps:

This is where you can go ahead and unselect the multiplayer aspect of the game.

Doing so will save you just over 17 GB of data!

In comparison, uninstalling the campaign will save 44 GB and Zombies knocks off only 2.5 GB. 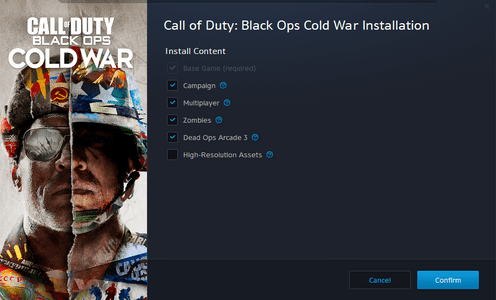 Black Ops Cold War: How To Change Your Reticle