Is the grind gone?

It wasn’t just us right, but that Apex Legends Season 7 Battle Pass grind has been near impossible to keep on top of?

Sure, we love the game, but you’d need to put in on a daily basis is just too damn high when we have so many other games and new consoles to try out.

And with all that extra time you have, why not check out some of our game recommendations here.

The Grind Was Too High

This season, Apex Legends dropped with a new style of Battle Pass.

Rather than just having to earn XP from the different activities, players now had to complete challenges to earn stars that would rank up their Battle Pass.

The system was similar to Fortnite ran their Battle Pass for much of Chapter 1.

The hope from the developers was that this system , which focussed more on Daily and Weekly challenges, would encourage players to hop into the game more regularly rather than blasting through levels just at weekends.

However, it all backfired.

The grind was just way too high, fans quickly noticed that the Battle Pass took much longer to rank up this Season.

If you weren’t willing to put in multiple hours every day, you’re going to struggle to hit rank 110 when Season 8 drops!

Many took this to mean that EA and Respawn were not so subtly pushing players to pay to rank up, however fixes that are being made show that wasn’t the intention.

Respawn clarified that the grind was never meant to be this bad.

While they want players to player every day, they don’t want to make their commitment too high.

So to fix this they dropped the XP that generates a Star from 10,000 to 5,000, and have now amended the difficulty of challenges.

In a tweet posted by Chad Grenier, Apex Legends’ Game Director, fans were shown the new rewards for daily challenges. 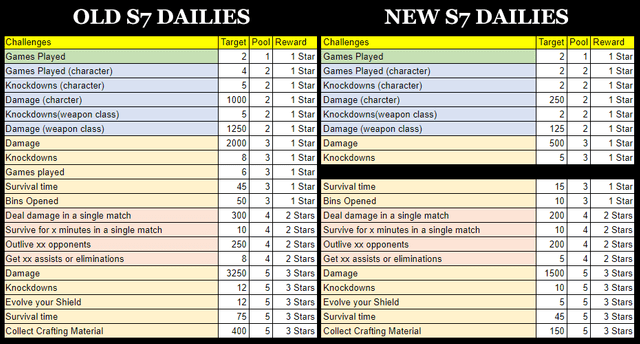 In addition, Grenier also promised that weekly challenge changes would be coming next week, alongside a gift of 10 free levels to every player.

This is certainly doing a lot to appease fans, and we think it’ll do a lot to help Respawn recapture the favour of fans.

Their idea certainly wasn’t a bad one, you want the Battle Pass rewards to feel meaningful, but by dropping the changes without explaining to players what this means, Respawn alienated them.

What should Respawn do now?

The changes made so far have been awesome, and will probably keep many people content with the Apex Legends Season 7 Battle Pass.

However, if you ask us, Respawn’s next move shouldn’t be to abandon a tough grind.

Making the mechanics simple and understandable will be hard, but we’d love to see two Battle Passes next season. One for fans that just want to have fun, and one for the hardest of hardcore.

The second pass will take much more play to grind out, but then the rewards will become more valuable. Wearing the cosmetics from this Elite Pass would strike fear into your foes!

And, by keeping up a more casual Battle Pass, Respawn can appease both sides of their audience.

What do you think of the news and our suggestions? Let us know!

Cyberpunk 2077: How Long Has It Been In Development?