Road To The Final Team 2 drops this week!

With a lot of teams still ready to be represented in the RTTF promotion from the Champions League, expect another team full of high rated, extremely demanded cards from around Europe’s best teams!

Here’s our prediction for Road to the Final Team 2, which will be dropping at 6pm this Friday, November 13th.

Road To The Final Team 2 Prediction

Here’s our full prediction for Road to the Final Team 2! 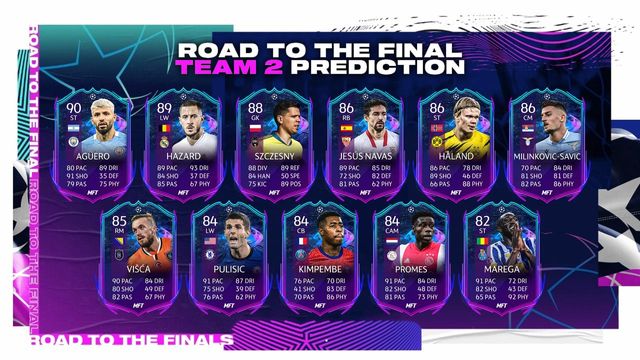 A Premier League striker was lacking from RTTF Team 1, so Aguero could certainly make up that position for RTTF Team 2. He’s the perfect card for the RTTF promo, having a slight injury currently, and will become even more meta with more upgrades to boost his pace further!

Manchester City currently sit at the top of Group C, meaning Aguero would already be pretty much guaranteed some stat boosts moving forward!

While Hazard was in our RTTF Team 1 prediction, no Real Madrid players made it into the team in packs. With Isco’s SBC being released, we’d expect more Real Madrid representation in Team 2, and we believe Hazard would be a great shout, even if Real Madrid are in a competitive Group B race for the knockouts.!

A goalkeeper selection is needed for RTTF Team 2, and we believe Szczesny could be a good option, being high rated, with a good chance of upgrading well throughout the competition with Juventus.

Juve looks pretty certain to progress to the knockouts in Group G, being 5 points clear of Dynamo Kyiv and Ferencvaros.

Despite Kounde’s RTTF Objective giving Sevilla a presence in the promo so far, we love the look of a Jesus Navas RTTF card, not only to link to Kounde’s objective, but also as a very strong La Liga RB option that may upgrade over time, with Sevilla looking strong currently, and very likely to progress to the knockout stages.

Another player that made it into our Team 1 prediction was Erling Haland, however with no Dortmund inclusion in the first team, RTTF Team 2 might be where he headlines!

Dortmund currently sit top of Group F, and look like favourites to progress, and with Haland’s sublime form in Europe, he seems like the perfect candidate for a Road to the Final card.

SMS may have had a live card in the UCL Road to the Final promotion previously back in FIFA 19, but we believe he’d still be the perfect addition to the FIFA 21 edition for Lazio, with few meta options available in the side.

Lazio looks to be joining Dortmund in Group F in heading towards the knockout stages, so we’ll have to keep an eye on them to see if they can make it through.

While questions will be asked over whether Istanbul Basaksehir can progress in the Champions League, they might be in for an RTTF card that could potentially progress through the Europa League.

Despite being in a very difficult group with Leipzig, PSG and Manchester United, Basaksehir are still in with a shout of qualifying.

Captain America would be the perfect inclusion for Chelsea in Road to the Final Team 2. We’ve already had Mason Mount’s SBC, and Pulisic would link very well to him indeed, offering a great initial boost to his 81 base card, with high-level potential upgrades!

Chelsea seem relatively certain to progress, with 7 points in their first 3 group games, which would take Pulisic all the way up to an 86!

PSG definitely need some love in the RTTF Promo, having made it all the way to the final last season. While Neymar/Mbappe/Di Maria might be a bit of a long shot for PSG’s card, Kimpembe would be the perfect option, being a decent CB card with high upgrade potential should PSG replicate their UCL run from 2019/20’s season.

One last card from our initial prediction makes it into the RTTF Team 2 squad, with Quincy Promes representing Ajax, after no inclusion in the first squad. Promes is, without doubt, the most demanded card from the Dutch Champions, and would be an incredible card should Ajax progress well into the competition.

Every promo squad needs that card that you pack all the time and for RTTF Team 2 that would be Moussa Marega for Porto. The Portuguese powerhouses look very likely to make it to the knockouts, sitting on 6 points from their first 3 games, meaning upgrades are very likely for a Porto player, suggesting there will be at least one released in the 2nd half of the promo.