The worldwide release of Call of Duty: Black Ops Cold War is right around the corner.

Black Ops Cold War is a direct sequel to the very first installment of the Black Ops series which released all the way back in 2010.

With just a few days to go until players can get their hands on a brand-new campaign, multiplayer and zombies experience.

Now, with just a few days to go until the game officially releases; it appears some players have found out how to jump in early!

WarzoneNewz on Twitter has noted that some Xbox players who have pre-loaded the game already have been able to jump into Black Ops Cold War.

They have noted this is only working for Xbox players.

Check out the full tweet below, as they note:

If you pre-ordered and have already pre-loaded it, turn your console OFFLINE and load it up!

Multiple players have told me this is only working on XBOX and i have not seen this happen for PS4 players yet. 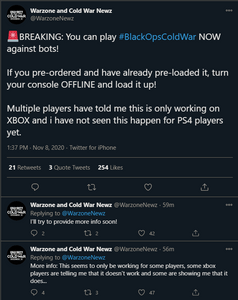 It appears that it is in fact working for some Xbox users, but as noted in the tweet; you will only be able to play against bots.

You will not actually be able to jump into any portions of the game, just practice your aim against bots.

So, if you pre-loaded the game on Xbox go ahead and see if this method works for you!