Time to be reunited with Shepard.

Mass Effect is one of the most beloved franchises in all of gaming.

Now, today is a very important day for Mass Effect fans; as it is the yearly N7 Day all over the world.

Although many speculated some sort of announcement was coming today, gamers are still surprised.

Here is all the news on the new Mass Effect Legendary Editon which will be coming soon!

Mass Effect Legendary Edtion will be a remastered version of the three games, which originally released years ago but this time around they will be releasing on modern consoles and PC.

Mass Effect Legendary Edtion will be a brand new remastered version of all three games and will release on PC and consoles.

Mass Effect, Mass Effect 2 and Mass Effect 3 which were all stellar titles released back on the Xbox 360 and PS3 will be apart of this bundle.

BioWare has noted in their blog post that the game will be releasing sometime in Spring 2021!

Your choices. Your squad. Your Shepard. Relive the legend in a remastered edition of the highly acclaimed trilogy. Mass Effect Legendary Edition arrives Spring 2021.https://t.co/jLUj8FUGaI pic.twitter.com/vxTKyq4LQ1

The game will be releasing on the following platforms:

They have also noted that they plan on future releases for the PS5 and Xbox Series X/S.

In the original Gamespot article which was taken down, it appears BioWare has noted to them that these are not full remakes of the original titles.

Instead, "BioWare intends to improve them so players can experience them in their best possible forms.".

So, the game is going to look modernized and up to date for 2020 standards when it releases! 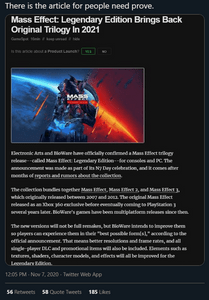 As of now, we do not have any gameplay for the Legendary Editon of Mass Effect, we can assume this will release sometime down the line!

Check it out here, or below are some key notes regarding the game's release.

For many months now, our team at BioWare has been hard at work updating the textures, shaders, models, effects, and technical features of three enormous games. Our goal was not to remake or reimagine the original games, but to modernize the experience so that fans and new players can experience the original work in its best possible form. It’s been amazing to see the adventures of Commander Shepard take on new life in super-sharp resolution, faster framerates, and beautiful visual enhancements. As game developers, we always hope that our games will transcend their original platforms. Having the opportunity to remaster the trilogy means that the fruits of a decade of our work will live on, and will be experienced better and clearer than ever before.

Mass Effect Legendary Edition will include single-player base content and DLC from Mass Effect, Mass Effect 2, and Mass Effect 3, plus promo weapons, armors, and packs – all remastered and optimized for 4k Ultra HD. It will be available in Spring 2021 for Xbox One, PlayStation 4, and PC, with forward compatibility and targeted enhancements on Xbox Series X and PlayStation 5. More information to come in the new year!

We cannot wait to jump back into the action at 4K this time around!