Now, we are just a few days away from the release of Valhalla, and the game is looking amazing.

With the recent news of Los Angeles Dodger MVP Cody Bellinger being in the game, we cannot wait to see what other surprises are within.

Ubisoft has gone ahead and posted their day one patch notes for the game!

It is not uncommon for massive AAA RPG's to release some sort of launch update for when they release all over the world.

The notes themselves do not include many changes for the release of Valhalla but outline some vital details.

One of the keynotes is the file sizes for Valhalla:

This is rather surprising to a lot of players, as Odyssey was nearly 100 GB on PC when it released a while back.

Now, the game is just under 50 GB; something our hard drives will appreciate.

As well, they have noted the pre-load and launch times for each region in the following image! 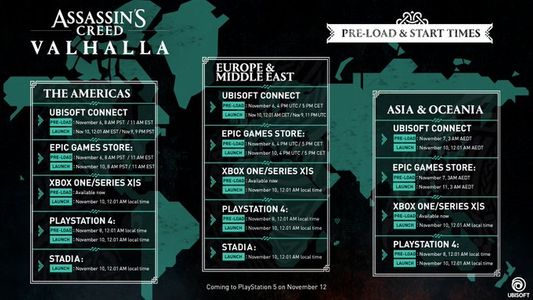 Here are some of the 'Game Improvements' they have also noted in the launch update:

Finally, there is going to be some additional content coming to the game.

We are beyond excited for the newest Assassin's Creed title! Let us know if you are as well.