Road to the Final Cards upgrade in a big way this year, check them out now!

Road to the Final has kicked off in FIFA 21 Ultimate Team, with the first RTTF Squad of 11 players, as well as Mason Mount’s RTTF SBC, and Jules Kounde’s RTTF Objective.

Given that these cards are dynamic and upgrade depending on the teams’ successes throughout the Champions League and Europa League campaigns, it’s important to understand how these upgrades are given out, as well as the potential upgrade paths that these cards could follow over the coming months!

How Road to the Final Cards Upgrade

Unlike Ones To Watch, Road to the Final card upgrades aren’t based on individual player performances but are instead based on how the overall team performs throughout the UEFA Champions League and Europa League competitions.

Road To The Final Upgrades have remained consistent since the promotion's inception back in FIFA 19, and cards will get upgraded by the equivalent of an in-form upgrade when they: 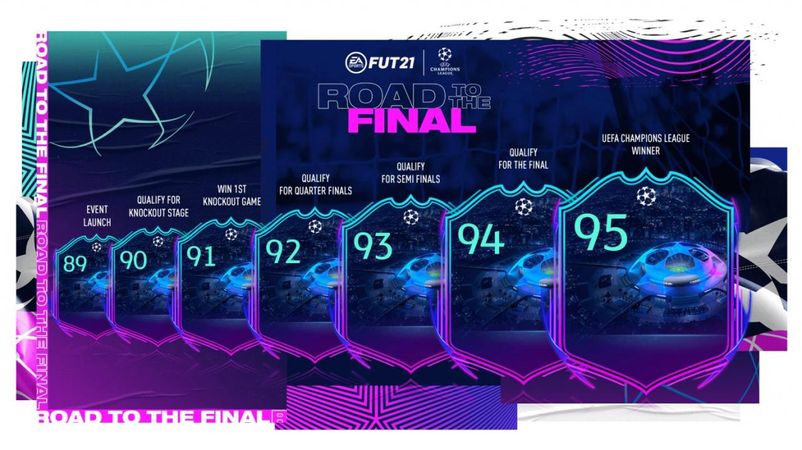 Furthermore, if a team of a card that currently has a Road To the Final UCL card gets knocked out of the Champions League to go down to the Europa League, the card switches to a Europa League Live Card, whereby upgrades are still possible should the team go on a run in this tournament.

Card upgrades work relatively the same for the Europa League items, with upgrades occurring when teams of players: 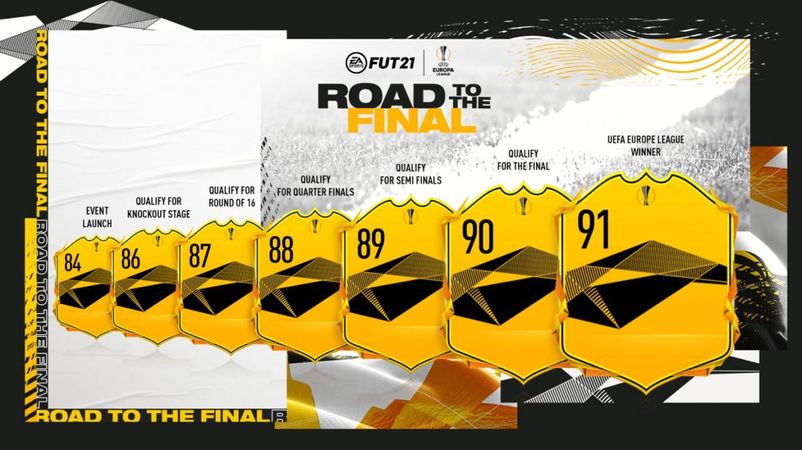 Road To The Final Potential Upgrades

Here are all the potential upgrades we could be seeing this year from Road to the Final Teams 1 & 2, as well as all the SBCs and Objectives cards that have been released throughout the last week.

Real Madrid are facing somewhat of a turbulent season so far in Europa, with only 4 points from their first 3 UCL games in a difficult Group B. While we expect them to pull through and reach the knockout stages, questions have to be asked as to whether the Spanish giants are at full strength in Europe, and if they can progress far into the tournament. 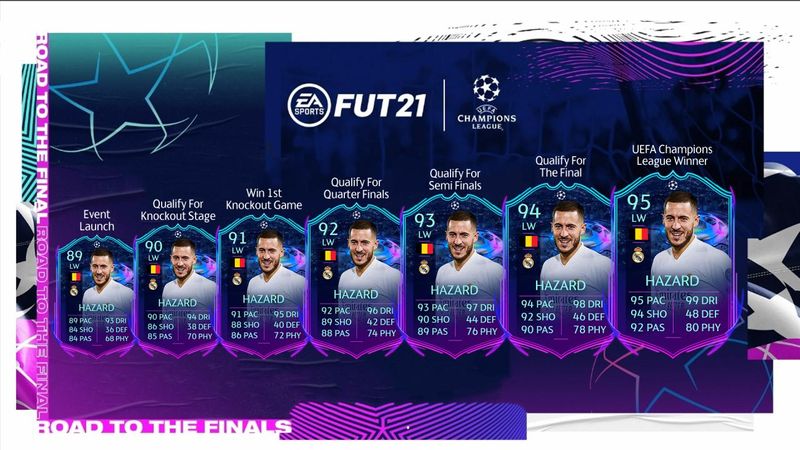 A big SBC this one, with Alex Sandro representing Juventus (Piemonte Calcio in FUT) in the Road to the Final promotion. Juventus currently sit 2nd in Group G on 6 points, and look very comfortable for securing a knockout stage spot, which would start Alex Sandro on a much needed upgrade path to becoming a truly usable Brazilian LB. 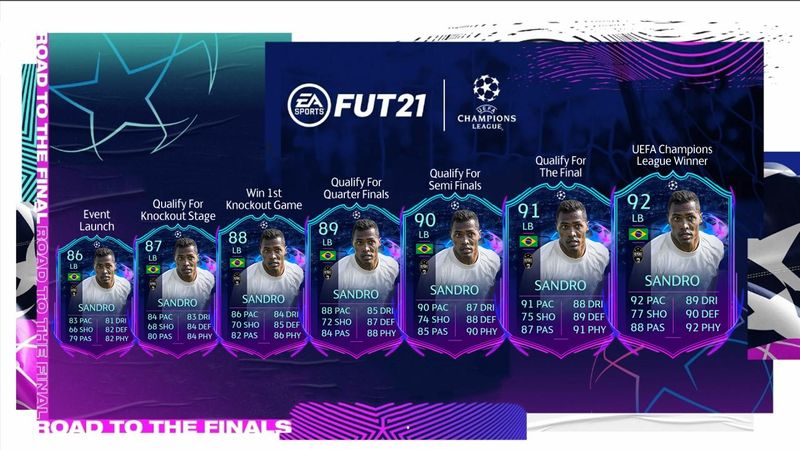 Gabriel Jesus represents Manchester City in RTTF this year, and looks guaranteed to get a few upgrades, with the blue half of Manchester leading Group C with a perfect points tally so far. While Jesus may not necessarily be the most meta option in FUT, we’ll all be keeping an eye on Man City this year to progress well into the latter stages of the competition.

Quincy Promes is a real fan favourite of FUT, and now with a dynamic item, has the potential to become one of the true FUT greats if Ajax can replicate their incredible Champions League run of the 2018/19 season. This year, that sat in a race for 2nd place in Group D with Atalanta also pushing for a knockout place!

Correa certainly starts off as an interesting, free card in FUT 21, however if Lazio were to really stamp their authority on the UCL and put together a run, he could become one of the best options in Serie A. They currently hold 2nd in Group F, close behind Dortmund, so there’s still everything to play for!

Draxler is a very interesting card for RTTF. While he may not start as the most appealing option in FUT, should PSG replicate form from last season and go far in the tournament, Draxler could become one of the best attacking midfielders not only in the league but across the top 5 leagues. However, with PSG currently 3 points off the knockout stages in Group H, an upgrade may be hanging on the next 1 or 2 fixtures.

Akanji is without doubt one of the best Bundesliga CBs, alongside the likes of Klostermann, Delaney, Upamecano, the list goes on. With a strong link to Zakaria as well though, we’re hoping Dortmund can progress far for the sake of our FUT squads! They currently lead Group F with 6 points, but have both Lazio and Brugge close behind on 5 and 4 points respectively.

Chelsea’s youngster is the first RTTF SBC of the year, and should Chelsea go on a run, he could become a very usable card. Despite his 3* skills and weak foot, he’s still not a bad card on the whole. 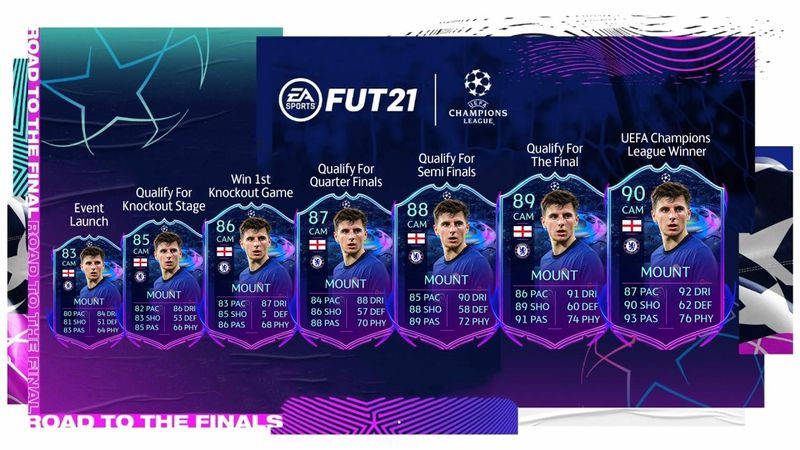 With Sevilla currently 2nd in Group E, 6 points clear of Krasnodar and Stade Rennais, it’s very likely that they’ll be progressing to the knockout stages, which would initially give Kounde a +2 upgrade. For a free objective card, he’s hard to pass up! 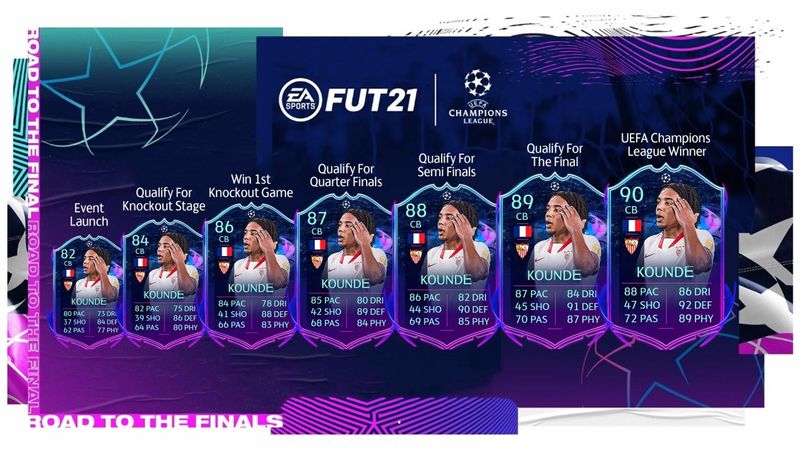 Upon release, Morgan Sanson is the cheapest card in the Road to the Final Team 1 squad, hovering around the 40,000 coin mark. While it’s borderline impossible that Marseille will even progress to the knockouts of the Champions league, sitting without a point in Group C, they could make a push for a Europa League challenge.

Atalanta have turned into a real presence in the Champions League over the last couple of seasons, making it to the quarter final last year. A similar run this year could turn Luis Muriel into a very usable ST option in FUT.

RB Leipzig have been seeing some serious love this year in FUT, with 8 special cards already in FUT 21. Leipzig face a difficult test in group H with PSG, Manchester United and Basaksehir all competing for the knockout stages, but if Klostermann and Leipzig prevail, we could be looking at the FUT 21 equivalent of last years’ Eder Militao RTTF card.

Shakhtar face a mammoth task of getting out of Group B with Gladbach, Real Madrid and Inter all in contention still to qualify. While he’d be a solid individual card, links aren’t too great within the Ukranian League, so this may be a card that we’d gladly pass up for other upgrades in RTTF.

Inter may have had a subpar start to the season, being bottom of Group B and outside European spots in Serie A, however with their firepower this season, we favour them to progress in either the Champions League or Europa League. While Perisic isn’t the quickest option on the wing, with a few upgrades he’ll become very usable.

Without a doubt the hottest prospect in the full-back position in the world currently, Alphonso Davies should be set for a big upgrade throughout FUT 21 with Bayern looking unstoppable this season.

Being an 84, his first upgrade will put him all the way to an 86, making him one of the best LBs in the game already, with the potential to go to a 91 if Bayern can replicate 2019/20s success.

While Zakaria may be injured, his Gladbach side has been performing well in the Champions League so far, and are currently top of a competitive Group B.

While questions will be asked over how long the German side can remain in the UCL, if Gladbach can upset a few speculators, Zakaria could be in for a whopping card throughout the year!

While Manchester United may have suffered an embarrassing defeat to Basaksehir in the last round of Champions League games, they still remain top of Group H and look like they stand a good chance of clearing the group stage this year in the UCL.

Once again, questions will be asked of how long they can remain in the Champions League, but should they make it through to the Quarter Finals at least, Rashford will be set for an incredible upgrade to an already meta card.

Barcelona’s perfect record in the Champions League overshadows what has been an awful start to their league campaign, winning only 2 of 6 La Liga ties.

Regardless, if they can keep their European form going, they could put together a strong Champions League push and see Griezzy getting some sizable upgrades.

Liverpool’s main man is a prime candidate for an awesome RTTF upgrade this year.

With Liverpool already near confirmed to be reaching the knockout stages, not even conceding a goal yet in the competition, Klopp’s side looks to be in fine form yet again in Europe, and could easily mount a charge for the trophy once again. Definitely keep an eye on Salah and the Reds this campaign!

Finally, we have Atletico’s Jan Oblak, who could be reaching TOTY GK levels should the difficult to beat Madrid go all the way and win the UCL this year.

Despite only picking up 4/9 points so far in Group A, we favour Atletico to progress far into the tournament with their hard to beat, gritty performances that win games, meaning Oblak could be in for some big boosts!