The latest instalment in the Call of Duty franchise is returning to the Cold War as Black Ops makes its return.

Cold War is one of the most anticipated games of all time, and it will also be the first release on next-gen consoles.

Now, Treyarch has revealed the roadmap for the new Call of Duty, and there is some exciting content coming.

Treyarch has posted the full image of the new game.

Check it out below before we dive into more details! 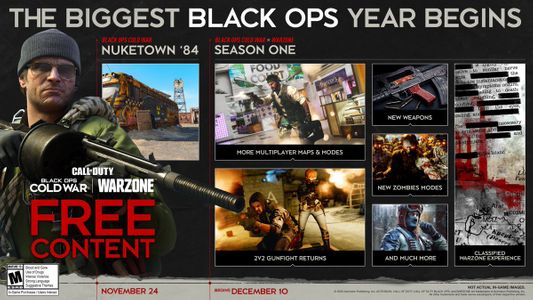 Perhaps the biggest aspect of the roadmap is the announcement of the first season.

Black Ops Cold War Season One will kick off on December 10th, and this is also when we can expect the integration with Warzone to begin.

As well, here is some of the content coming on the 10th:

Along with much much more, they claim!

Along with the announcement of the first season, they have also revealed when a beloved map will be coming to the game.

Nuketown, the map originally introduced during Black Ops One will be making its way into Cold War on November 24th.

We do not know any more details regarding the release of the map at the time but we will keep you in the loop!

Cyberpunk 2077: How Long Has It Been In Development?