Destiny 2 Beyond Light Install Sizes and Requirements Revealed for PS4, Xbox One and PC

Alongside what to expect in the expansion content is a wealth of information about content coming for all players of the game.

Now, Bungie has released further details regarding the complexity of the DLC's file size.

Beyond Light is going to take up a decent amount of storage when it releases.

Bungie has released a new blog post detailing some important notes about the DLC.

The install sizes across all platforms has been revealed, take a look down below!

They have also noted the following important notes for certain platforms:

Also, don't forget that the Xbox Series S and Series X optimisations are likely to arrive in December, making the game larger. 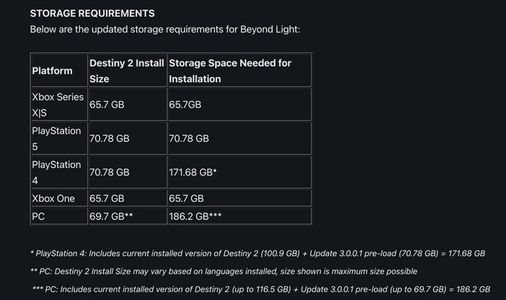 There is certainly a lot coming to Destiny players in the next little bit, for those who have not seen yet; here is a quick rundown of some more content coming.

The roadmap is highlighted by the following features:

For Beyond Light, players can look forward to a new campaign, as well as Stasis subclasses, and the Salvation's Grip Exotic Grenade Launcher.

All players will be able to visit new destination Europa, while a new Cosmodrome tutorial will introduce newcomers.

Then there's the usual suite of weapons and armour to collect and triumphs to complete, as well as a new strike known as The Glassway.

The Seasonal Artifact also arrives for players on November 10, as well as a new activity called Empire Hunts. 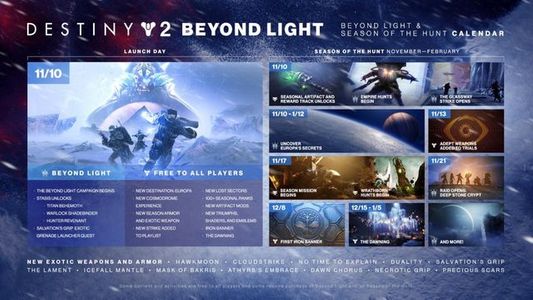