Xbox Series X Review: Is This Microsoft's Best Console Ever?

X is indeed giving it to us.

The transition between Microsoft's Xbox 360 and Xbox One was undoubtedly a bumpy one for the tech giant, with the almost universally adored console that put gamers at the centre of the experience being phased out for a big, bulky, underpowered box that put media consumption on the same pedestal as gaming. With the company attempting to reverse that trend in recent years, the Xbox Series X marks the zenith of Microsoft's "ecosystem" – and shows the Seattle-based company has got its swagger back.

With an incredible library out of the box, forward-thinking features like Quick Resume and of course, Game Pass, the Xbox Series X makes a strong contender to be your next-gen console of choice.

Please note, our impressions of the smaller, digital-only Series S will follow in the coming days.

We've all seen the memes, but in truth, the Xbox Series X is nowhere near as monolithic as it first appeared at its unveiling. It's chunky, yes, and heavy too, but it's actually only about as tall when stood vertically as two Xbox controllers stacked on their side.

On the front, there's a power button that'll be instantly familiar to Xbox One owners, a USB port, a 4K Blu-Ray drive and a pairing button for controllers, while the back offers space for one of Seagate's extended storage solutions, two USB ports, HDMI 2.1 port and power supply. That's right, folks – no HDMI in, and no Optical Out, which is bound to disappoint some users.

The base of the device when stood vertically is flat and sturdy, with areas to allow for air intake which is then pushed through the unit and out through the ever-so-slightly concave top – although you can lay it sideways, too.

Powering on, you may be wondering what's actually new here – the dashboard is almost identical to the one Xbox One users have had for a while, for better and for worse.

That means you'll still see advertisements on your Home Screen, in amongst your "content" blocks for things like games, Game Pass, the store, and more. The biggest difference really is in the speed of navigation, with the traditionally sluggish Xbox One store opening in split seconds and much more capably laid out thanks to a recent update.

The Guide also returns, with a tap of the Xbox button allowing users to flick between recently used games (and jump in with Quick Resume – more on that shortly), friends lists, achievements and more. The speed of the Xbox Series X makes flicking through it strangely satisfying, despite it essentially being the same setup Xbox gamers have been used to for years at this point. 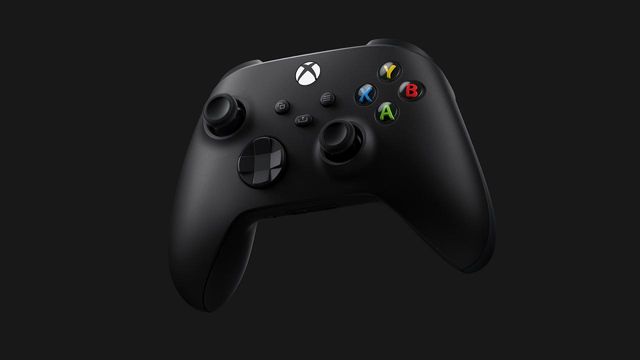 The Xbox Series X controller doesn't make any giant leaps forward, with Microsoft instead opting to consolidate the lessons it has learned over the last three console generations.

The pad is slightly smaller, although with large hands myself it still feels comfortable to hold for long play sessions. The "Share" button is the big new addition, meaning you'll no longer have to head into menus to capture your "best bits". When working with the faster OS, it becomes much easier to share clips and screenshots to social networks or OneDrive.

The textured grips and triggers are also a nice addition, as is the hybrid D-pad which is inspired by the one found on the Elite Controller V2. Speaking of Xbox One controllers, you'll be able to connect those accessories to your Series X with no trouble at all.

While I'd suggest that the Xbox Series X controller is Microsoft's best effort yet, it's inevitably disappointing to still be relying on AA batteries in 2020. Of course, you can still use an Xbox One play and charge kit, but with the controller now charging via USB-C (and no USB-A to USB-C cable in the box), you'll need to fork out for a new charger if you don't have one laying around.

Much has been made of the Xbox Series X's impressive 12TFLOPS, and there's no denying that the grunt it offers over the Xbox One X that it essentially replaces is nothing short of staggering.

While we've not been able to test out the 8K output, in 4K the console shines. Whereas the One X could often achieve 4K with inconsistent frame rates, games like Monster Hunter: World now run at an almost completely smooth 60 frames-per-second – and it's not even optimised yet.

Nowhere is this power more keenly felt than when using the new Quick Resume feature. Hopping out of a Series X optimised title like Gears 5 puts the game in a sort of suspended state, allowing a user to jump in to say, Ori and the Will of the Wisps. Once you've had your platforming fill, you can swap back to Gears 5 and find it exactly how you left it. Two 4K, HDR titles, running essentially side by side, is going to be a dream for indecisive players like myself.

It's worth noting that at the time of writing, Quick Resume isn't supported on all titles, but Microsoft did confirm that it's being patched into more Xbox One and Xbox Series S/X games in the coming days. We wish there was a way to tell which games were currently available for Quick Resume, however, but hopefully, that's a quality of life improvement that Microsoft will add in the coming months.

Then there's the console's SSD, which offers some insanely fast loading times. We've already reported on how it essentially makes The Witcher 3's fast travel instantaneous, but even more recent titles see a big jump. Death in Doom Eternal no longer leads to the tapping of fingers or checking of phones, instead letting players pick up control of the Doomslayer in seconds – provided the game is installed on the console's internal drive.

Next-gen games can only be played from the console's internal SSD, however, so you're likely to want to move games over from a USB 3.0 hard drive as and when you want to play. That's undoubtedly inconvenient, and while Seagate offers a £220 expansion card, that's a high price to pay.

Still, installing a game like Dragon Ball FighterZ on the internal SSD, and being able to jump into a fight in seconds as opposed to minutes feels akin to finally upgrading an older PC – it's the same game, just better and faster.

Making things a little more palatable is Smart Delivery, which is essentially Xbox's way of making sure you don't need to buy a game more than once. Take Forza Horizon 4, for example, which is available through Game Pass. On my Xbox One X, the console installs that version of the game, but on the Series X, it automatically installs the more optimised version. It's essentially like having a helping handpick your optimal settings behind the scenes. 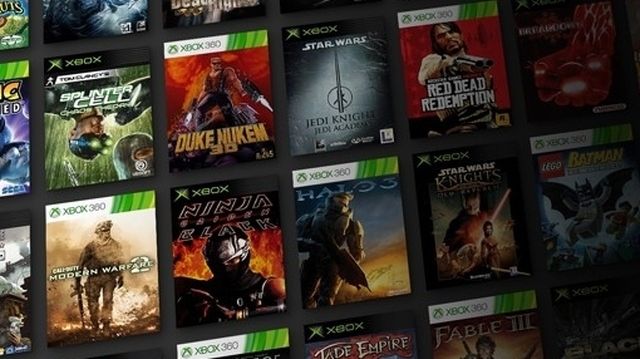 One of Microsoft's core pillars, since it added backwards compatibility to the Xbox One, is allowing players to experience older titles from previous hardware generations, and that lineage is undoubtedly still alive with the Series X.

That means if you've got a bunch of Xbox 360 or original Xbox titles that you still come back to on Xbox One, you'll be able to carry those forward with you.

Not only that, but even games from the Xbox One generation receive improved load times, higher resolutions and better frame rates through backwards compatibility. I mentioned Monster Hunter: World before, but even games like the original Mass Effect and Star Wars: Knights of the Old Republic are playable and make the jump to the new system in style.

Then there's Auto HDR, which uses a system-level technique to add high-dynamic-range colours to games that didn't have it before. It doesn't work on every title (Fallout: New Vegas is still just as brown and grey as you remember it), but it's another way that Microsoft is giving players a reason to return to old favourites. 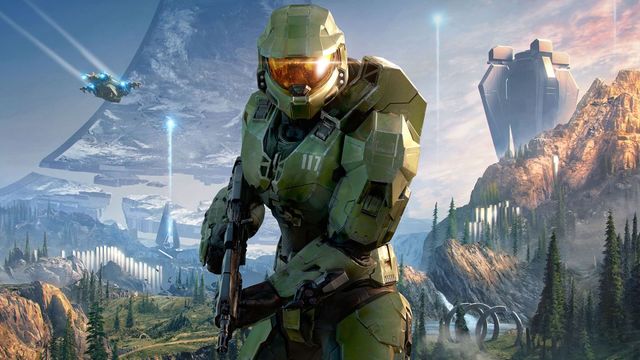 Halo Infinite missing the console's launch is a big disappointment

The elephant in the room, of course, is Xbox Game Pass. Microsoft has built out its ecosystem around its monthly subscription service, to the point where it feels almost as essential as an Xbox controller.

Offering plenty of Xbox, Xbox 360 and Xbox One titles, the service will also offer nine titles that are Series X optimised at launch. That means on launch day, you can hop into Gears 5 or Gears Tactics (making its console debut at a buttery smooth 60 frames-per-second), Sea of Thieves or Forza Horizon 4 as part of your monthly payment.

Of course, those are older games, and Microsoft's struggles with first-party exclusives haven't been forgotten. With Halo Infinite slipping to 2021, if you've already played the likes of Grounded and Ori and the Will of the Wisps, you'll be relying on third-party titles and Game Pass to get you through to 2021.

Then there's the fact that many of the titles offered (and Game Pass itself) are available on a Windows PC, which means if you're already on Windows, you may not be able to find reasons to invest in a Series X. It appears Microsoft is content with players playing where they choose, though.

Read More: Xbox Series X Launch Games Confirmed: Everything You Can Play On Your New Console on Day One 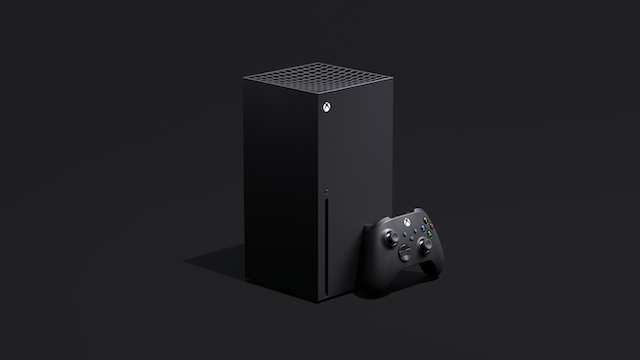 Series X's design is likely to be divisive

A lack of new exclusives and a bizarre loyalty to AA batteries aside, the Xbox Series X is Microsoft's best console yet. It shows a company that's doing its best to right the wrongs of the Xbox One launch, and its player-first mentality calls to mind the Xbox 360's heyday.

Whether you need a £450 console could come down to how powerful your PC is, but after a couple of weeks with it, it's hard to go back to the Xbox One X.