Does 'Double-Movement' Still Work In Fortnite? Here's A New Way!

The recent Fortnite update 14.50 has implemented some fantastic content for the final weeks of the season.

With the Trio FNCS Grand Finals concluding this past weekend, players are now looking ahead to the recently announced Dreamhack Duos.

The on-going controller versus keyboard and mouse discussion has taken a new turn this week.

This is the first time the discussion has reached these heights since Linear was nerfed quite some time ago.

Here's all the news on double movement, and potentially a new way to use it!

During the morning of the 14.50 update, some competitive players noted a drastic change with their movement.

Double-movement binds for those who do not know is when players bind another movement bind to their standard 'WASD' keys.

This allows them to mimic the movement that controller players have and has been used by competitive players such as Bugha, Benjyfishy among others.

It was a well-known feature within the community and it appears Epic has removed this feature during the 14.50 update.

No reason was given into why this was removed, and it has upset some players of course, as noted by Benjyfishy below! 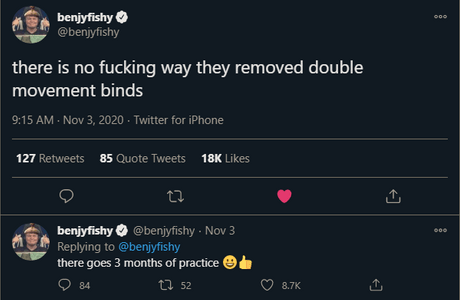 Is There A Way?

Players have been searching throughout the Fortnite settings in hope of finding a new way to mimic double movement if they are on PC.

It has been a struggle for some to adjust to the standard movement, but competitive Fortnite analyst Reisshub posted a new video to the Fortnite competitive subreddit noting how to accomplish the movement.

Essentially, you will have to use a controller to achieve the double movement and your character will always be moving.

So, the trade-off is significant.