The PS4 version for today's Fortnite update is missing!

For some reason, Epic Games have distributed update v14.50 to all available platforms apart from the PlayStation 4.

Xbox One, PC, Nintendo Switch and Android have received the updates, but nothing has been sent to Sony's flagship console.

Don't Miss Out: Get all the V-Bucks you need (plus some extra for free) right here on Amazon!

There's no explanation for why the Fortnite update is missing or when it will finally be distributed to the console.

Players are going mad on social media asking the question everyone wants to know: where is the PS4 update?

There's no logical explanation other than that Epic are struggling with the online services or store for PSN.

@FortniteStatus has said the following:

"Due to an issue, Playstation 4 players will receive v14.50 update at a later time. Until that time they will be able to keep playing on v14.40. We will update you when we'll have more information."

If you check the PSN status, everything is fine other than PlayStation Video - which we doubt is causing the issue.

A new PlayStation skin seems to have been added to the game, could this be causing the delay?

The night before the update, Epic sent out another round of creator patch notes at around 10:00 pm EST.

These detail the main content coming to the game and can be viewed down below thanks to claystehling! 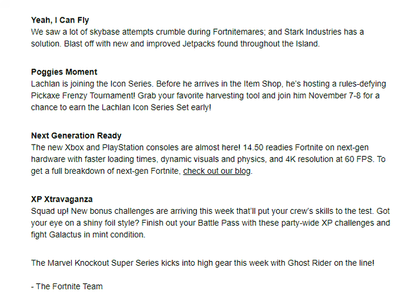 It appears Jet Packs are back within Fortnite, Epic has noted the following:

We saw a lot of skybase attempts crumble during Fortnitemares, and Stark Industries has a solution. Blast off with a new and improved Jet packs, found throughout the island!

Squad up! New bonus challenges are arriving this week that'll put your crew's skills to the test. Got your eye on a shiny foil style? Finish out your battle pass with these party-wide XP challenges and fight Galactus in mint condition.

- We're aware of an issue with the harvesting animation of the Burn Basher Pickaxe and have disabled it in competitive playlists.

- Due to an issue, Gas Cans have been temporarily disabled in all game modes.

- We’re investigating an issue that is causing the Cozy Chomps and Ravage Outfits to display as Ramirez while in the Lobby and in a match.

• THWIP! Legacy not being awarded.

- The THWIP! Legacy isn't awarded after meeting its requirement (immediately eliminate an opponent after pulling them with a Harpoon Gun during Season 4).

• Baller Movement is unnatural after exiting

- After exiting The Baller, the vehicle may continue to move unnaturally and can jitter.

• There is no "Back to Hub" option in Creative Play server.

- There is a "Back to Hub" option in a Create server but NOT a Play server. The back to hub rift in an island does not work either.

• Team Size setting does not properly function when Join In Progress is set to Join Next Round.

- Team Size does not properly limit the number of players when join in progress is set to Join Next Round.

• Weapons and perks not functioning correctly after 14.30.

- We're investigating the various reports of weapons and their perks not functioning correctly after the 14.30 update. Some of these symptoms include:

- Taking storm damage will cancel mounting your hoverboard. This makes it hard to get out of the storm if playing a low mobility class.

- Players may find the game unresponsive or frozen after opening a Loot Llama in Save the World then opening the settings menu right after.

- Wild West Llamas may not have Steampunk / Wild West items in them. It's recommended not to purchase them if Steam Punk items are not shown in the X-Ray Llama contents.

• Nintendo Switch audio may be delayed or dropped out.

- We're investigating an issue that is causing audio to be delayed or dropped out for players on Nintendo Switch.