When is the next major update for Grand Theft Auto Online?

It could be argued that the last update was a little 'light', especially when compared to the Diamond Casino Resort and Diamond Casino Heist updates.

But, Rockstar has finally revealed what it has dubbed "the biggest GTA Online update yet" – the Cayo Perico Heist.

Adding a new map area, social spaces, radios, and the small matter of a private island to raid; get ready for a new adventure in one of the most popular online games in history.

Here's everything we know about GTA Online's Cayo Perico update.

Click the links below to head to the section you want to read first.

The new GTA Online update, introducing the Cayo Perico Heist, is now live and ready to be downloaded on all systems.

Sizes of the updates can be found below:

Use this handy map to help show you when the update drops today. For our fellow friends in the UK, keep peeled for the download to drop at 10am.

Big thanks to VideoTech on Twitter for creating the map! 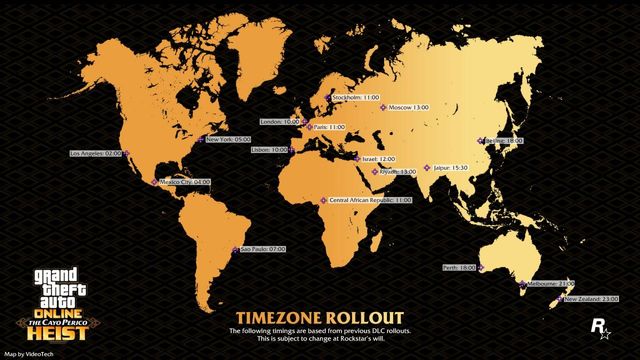 We're just a day away from the big update, meaning it won't be long until we're setting off on our submarine's maiden voyage.

We'll be adding patch notes as soon as we have them.

Rockstar has noted the following radio stations are coming with the new update.

"Alongside the grand opening of The Music Locker and its new slate of resident DJs, GTA Online’s musical universe further expands at the launch of The Cayo Perico Heist with the addition of three new radio stations, as well as brand new mixes arriving on hit stations FlyLo FM and Worldwide FM, for a whopping total of over 250 new tracks, making this the biggest ever musical update to GTA Online," Rockstar revealed. 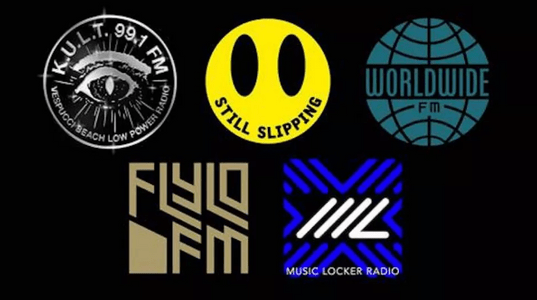 Rockstar has promised more details to come, but we do know that the update will arrive on December 15.

It's likely that players will have to invest in plenty of property and tools for the job, so be sure to grind out those dollars in the weeks before launch.

Good news, GTA fans – the update is expected to drop in the morning, UK time.

After some teasing, Rockstar Games has finally announced the Cayo Perico Heist for GTA Online.

"Prepare to infiltrate the remote island compound of the world’s most notorious drug dealer in Grand Theft Auto Online’s biggest, most daring, and action-packed addition yet: The Cayo Perico Heist," the page reads.

The heist will require players to breach Cayo Perico, a private island with advanced security.

Once inside, you'll earn valuable evidence, art, gold and drug money, with Rockstar calling it the "biggest GTA Online adventure ever".

The developer has promised "a brand-new approach to Heist design that features the ability to play everything solo or with up to three other players", as well as new vehicles and weapons.

Aside from the heist itself, the island is a new map location, and players can expect new social spaces, too.

Interestingly, Rockstar is promising guest DJs, along with new songs and radio stations.

Oh, and just the small matter of a "heavily armed submarine HQ".

The new heist is called 'The Cayo Perico Heist'.

"Prepare to infiltrate the remote island compound of the world’s most notorious drug dealer in Grand Theft Auto Online’s biggest, most daring, and action-packed addition yet: The Cayo Perico Heist," the page reads.

The heist will require players to breach Cayo Perico, a private island with advanced security.

Rockstar has unveiled the Music Locker, a new nightclub underneath the Diamond Casino (so that's what all that construction was about).

Find out more here, with the developer hinting at reworks of radio stations as well as promising world-class DJ appearances.

The submarine was first seen in the Cayo Perico Heist trailer.

Many players have taken to forums to discuss how much the submarine will cost.

The general consensus is that it will cost roughly $5 million.

Then adding on upgrades it could be another $3 million.

Add them together and that makes $8 million, so, for now, we'll speculate it to cost $8-10 million.

The new Heist will feature plenty of new vehicles.

Nothing’s confirmed until the update drops, but so far the most likely new vehicles include: the “Squaddie” (Hummer H2) cut from the original GTA 5 release, a hovercraft, a large Russian military truck, a combine harvester (believed to have been cut from GTA 5 years ago), a military chopper, a vintage pickup or two, and some other odds and ends.

Despite the launch of new next-gen consoles this November, it seems unlikely that the next update will take advantage of next-gen tech.

This, it seems, has been pegged for the games next-gen release in 2021 in line with the re-release of the game on PlayStation 5 and Xbox Series X.

"The new generation versions of GTAV will feature a range of technical improvements, visual upgrades and performance enhancements to take full advantage of the latest hardware, making the game more beautiful and more responsive than ever."

So it appears we won't see many (if any upgrades) when the next update releases in 2020.

The very first teasers for the next GTA Online Heist have started in-game (as of November 12, 2020). It seems construction work is underway at the Diamond Casino Resort, again.

What could this mean...

The Best Weapons In GTA Online