FIFA 21 Review: Is It Worth It? Gameplay, Graphics, Content And All Modes Reviewed

It’s time for our annual FIFA 21 Review, covering all aspects of gameplay, graphics and sound, all the modes in this year’s edition of the famous footballing franchise.

In a year of anomalous complications with a global pandemic hindering game development, have EA managed to deliver and start reviving a title that’s been under a harsh spotlight for the last couple of years?

Gameplay - The Most Balanced Experience In Years - 8/10

Gameplay in FIFA has been a major point of contention over previous years, with FIFA 19’s infamous La Croqueta and El Tornado spam, to FIFA 20’s heavy park the bus style, slow gameplay that bored players into a deep sleep.

FIFA 21 however is a definite step in the right direction on the football pitch. While a few issues are apparent, such as goalkeeper mechanics being rather inconsistent, for the most part, the gameplay feels faster, more responsive and more dynamic than other FIFA titles from previous years.

From our experience playing over the last couple of weeks, the gameplay is certainly a step up on FIFA 20 and FIFA 19. Considering the struggles that 2020 has brought, there have been a number of really positive changes in FIFA 21, predominantly in: 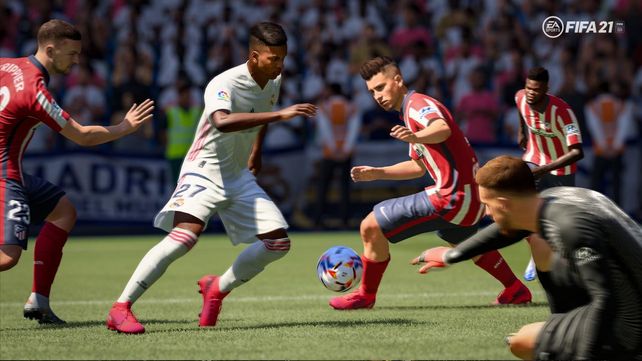 The FIFA Community in general has been crying out for improvements to gameplay speed and responsiveness for a number of years now, especially after the sluggishly slow experience from FIFA 20. FIFA 21 delivers on this front, with faster, zippier passes, agile dribbling allowing for more intricate movements in the attack, and new data centres around the globe allowing for greater connectivity for players.

It’s fair to say, FIFA 21 has a far more balanced meta than previous editions. While counter-attacks are still very effective, lending itself towards a park the bus style meta, players have a number of options in attack, from a more possession-based passing style to more of a wing play style utilising crosses, to skilling thanks to improved skill move chaining and agile dribbling. Improved Passing Mechanics also have to be mentioned. Through balls are very effective this year, with higher-level players such as Kevin De Bruyne being able to thread the needle to find attackers in space behind defences. This year, having top-level playmakers in your side is key, lending itself towards a number of different playstyles.

Collision mechanics have been overhauled in a big way this year to create a far more realistic game flow in which players are no longer falling over each other in chaotic situations, but instead anticipate other players’ movements and react accordingly. Players can frequently be seen changing the path of runs and jumping over tackles, creating far fewer of those crazy FIFA moments that we’ve become accustomed to over recent years.

Dribbling has been rejuvenated this year, with the introduction of Agile Dribbling. While at first the sheer speed of players dragging the back around seemed a little too much, we’ve certainly noticed instances in which this new mechanic has dramatically improved the possibilities in attack, leading to far more creative goal scoring opportunities. We’re excited to see how the competitive scene takes to this new feature to utilise it at the highest end of professional FIFA gameplay.

The improvements to attacking intelligence from AI players have to be mentioned with great praise. In the last 2-3 years, CPU controlled players off the ball would almost be statue-esque, rarely making runs of their own accord, relying on players to call short or trigger runs in behind, resulting in a very stale, predictable flow in the attack. This year, players make intelligent runs off the ball, frequently cutting inside from the wings to pick up space, make darting runs to catch out centre halves, and hold runs to stay onside for the perfect through ball. This is possibly one of FIFA 21s greatest accomplishments in making the game fresh and exciting for players.

Finally, a big leap this year in heading has to be mentioned. The newly introduced ‘Manual Heading’ system not only brings heading back into the meta in FIFA, but also adds an additional level of skill to attacking, with players having to perfectly aim their efforts on goal for best results. Finally we can use those taller front men to great effect, broadening the pool of players that we can effectively use in FIFA.

FIFA has always been a powerhouse when it comes to graphics and presentation, and FIFA 21 delivers on this front yet again, and we’re so excited to see what the title looks like on next-generation consoles later this year!

FIFA has always been a powerhouse when it’s come to presentation, with a long list of official licences, fully rendered player models, faces and animations, with the latest updates to stadiums and broadcast packages around the world.

On current generation consoles, despite some small graphical glitches and issues here and there, such as club crests not showing on kits in FUT, and some small visual glitches here and there, it’s the experience we’ve come to expect from FIFA over the past few years. High-quality player, kit and manager renders certainly deliver on the realism front, with stadiums rendered in epic quality that will no doubt be taken to the next level on next-generation hardware.

In a pandemic filled 2020, stadiums feel more alive than ever, with crowd atmosphere and reactions being immersive and somewhat out-of-the-norm for this year, coupled with a whole host of new crowd chants and songs.

FIFA Ultimate Team - A Similar Model To Years Past

Moving onto the flagship mode of FIFA 21, we have the ever-growing FIFA Ultimate Team mode, that allows players to build their dream club and a squad from thousands of real-world player items.

In FUT 21, while the experience is still very heavily geared towards a “Pay-to-win” model, with FIFA Point spending heavily encouraged to reach the highest levels of competitiveness, the mode has made good strides in a number of areas.

New modes such as Live FUT Friendlies certainly allow for a more casual approach to FUT progression, allowing players to earn new items such as players, packs and XP through interesting themed matches. This coupled with new FUT Events does help relax what can be quite a stressful, competitive mode. 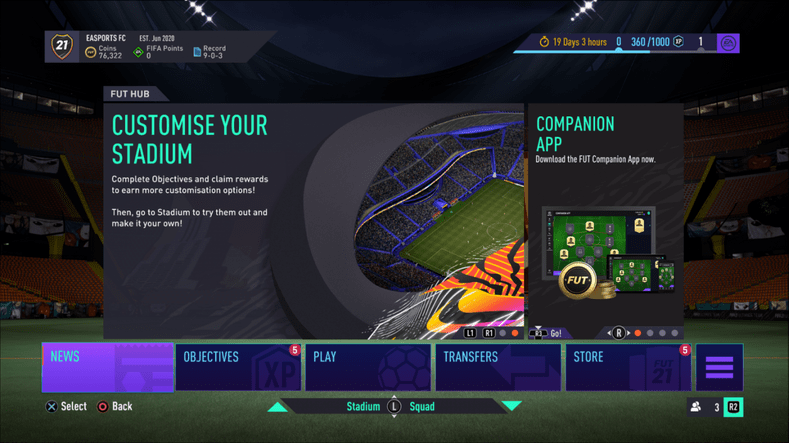 Division Rivals and FUT Champions remain the core of competitive gameplay, and have suffered what many players would consider a major setback this year. With Weekend League games contributing to a new 30 match limit in Division Rivals, players are forced to make sacrifices and choices to decide how to best split their time and ultimately means that both modes are only focused on between Thursday and Monday, leaving the rest of the week relatively dry for competitive gameplay content.

Off the pitch, before the first patch, FUT was a struggle to fully appreciate, with laggy menus, some User Interface glitches and a relatively poor presentation. Luckily fixes have been implemented, allowing new features such as FUT Stadium customisation to flourish, adding new depths to FUT 21.

Volta was a big new addition last year, however this year in FUT 21 it has been taken to a new level entirely thanks to the introduction of VOLTA squads, allowing up to 4 friends to squad up cooperatively to take on other players across the globe.

It has to be said, the fast-paced, skill-based exciting VOLTA gameplay is an experience that truly shines when played online with your mates, there’s nothing that gets the party chat going quite as much as a perfectly executed skill goal with a sumptuous finish!

We’re excited to see where VOLTA can go in the future, we know we’d love to see this mode integrated with either Pro Clubs or even FIFA Ultimate Team!

Career Mode in years past has become somewhat of an ugly duckling in EA Sports’ eyes, with updates and new additions being few and far between. Luckily, in FIFA 21 this changes in a BIG way!

FIFA 21 Career Mode takes the mode to an entirely new level of club management, off the pitch in developing talents, as well as on the pitch managing them.

The new innovations into player positioning development allows you to convert and tailor different players to positions that best match their skill set. In our first role as Liverpool manager, training up Trent Alexander-Arnold to become a Steven Gerrard-esque midfield maestro proved to be a real treat, with fierce results! When utilised correctly, the possibilities for creating your title challenging squad are endless. 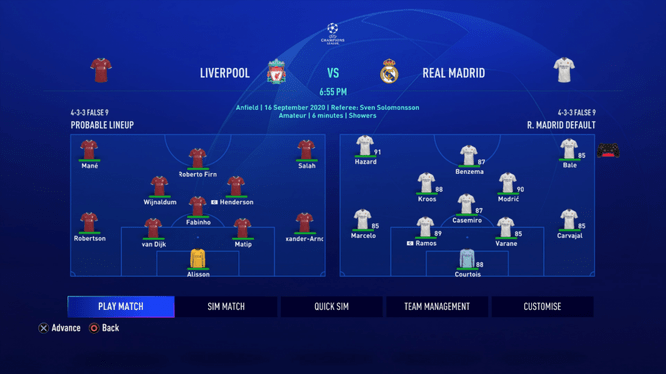 When it comes to managing your team on the pitch, the new Interactive Match Sim is an instant hit. For those familiar with the Football Manager series, having a 2D, top-down view of the live-action with metrics such as average rating will seem very familiar, however, with the option to jump into games at the click of the button, you can vary your level of involvement in games, which is something the community have been crying out for years!

Remember what we said about career mode being somewhat of the ‘ugly duckling’ within FIFA, unfortunately, Pro Clubs looks to have taken on that title, with very few meaningful updates this year.

With Custom Tactics, something that’s been in other modes for years, and customisable AI players being the only 2 major innovations this year, the clubs community has been left feeling rather neglected and in need of more. 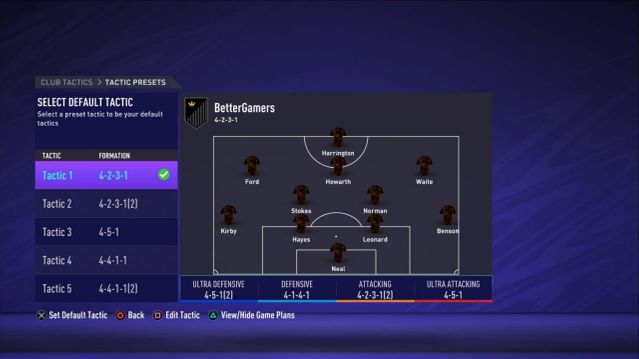 New skill trees add in new choices and builds to make pros unique, however, players are pushed into a constant game of tug of war to decide between skill moves, weak foot and pace with the limited numbers of points.

Couple this with a whole host of early glitches, such as positions being swapped around if you have an any, to the appalling pro goalkeeper animations, to XP and Skill Point bugs, and ultimately pro clubs feels like a mode that’s had very little attention this year.

For the most part, FIFA 21 is a good step in the right direction for the title, after 2 years of heavy criticism. Considering the hurdles in development that have had to have been overcome, new innovations in gameplay, FUT, Career Mode and VOLTA can’t be ignored, despite the number of bugs and glitches that can be found throughout.

All in all, if you’re a fan of the beautiful game, FIFA 21 offers something for everyone, from the pitch of FUT, to the streets of VOLTA, to the dressing room in Career Mode, or the party chats of Pro Clubs!