Let Us Give Thanks

Now, we are patiently awaiting the release of the Turkey Day update, which should be soon!

If you want to know everything there is to know about that ACNH Chrismas/Winter update, follow the link, because, for this page, we're focussing on Thanksgiving festivities in November.

UPDATE - Nintendo has confirmed that on 19th November, a free update will arrive for Animal Crossing: New Horizons. The update will introduce holiday events and enhancements. This includes content related to Thanksgiving, or 'Turkey Day', which starts on 26th November.

As touched upon, the Fall trailer teased that the next free update to Animal Crossing New Horizons will encompass Thanksgiving and Christmas events.

This we're told, as shown by the large screenshot below, will arrive 'late November' but we wouldn't be surprised if we see it release in two parts like the Summer update.

In the previous Animal Crossing games the Thanksgiving event has typically been billed as 'The Harvest Festival', taking place once a year on Thanksgiving (the 4th Thursday in November). 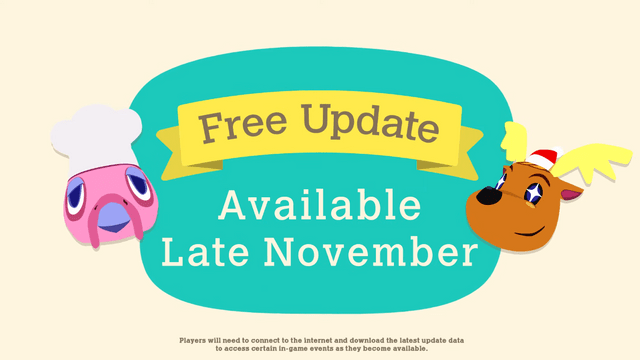 It's hard to make any definitive suggestions right now, not least when the Halloween update is still ongoing.

But, it does seem incredibly likely that some of the gameplay mechanics used for the Fall Halloween Event will be reused for Thanksgiving and Christmas.

For one thing, we can certainly expect to see Franklin the turkey make an appearance. He's even shown on the 'coming soon' image in the trailer.

When he does arrive, we would imagine there will be new outfits/costumes players can purchase not to mention new DIY recipes to create some wonderful Thanksgiving decorations.

We wouldn't be surprised to see similar mechanics used from Animal Crossing New Leaf, in which Franklin asked played to help him fetch some ingredients for his Harvest Festival courses. Deliver everything to Franklin and he will start cooking a meal.

And In return, he will give the player Harvest furniture or a fruit basket. If the player managed to get all four secret ingredients, he also gave them a cornucopia.

So it's not too hard to envisage what we could be doing for the Thanksgiving event in Animal Crossing: New Horizons.

For now, though, we still have a while to wait, but stay tuned for more info as and when it arrives!

The Legend of Zelda: Breath of the Wild 2 LEAKS: Release Date, Story, Trailer, Ganondorf, Pre-Order Bonuses And Everything You Need To Know