When is the Rainbow Six Siege Year 5 Season 4 Release Date?

What to expect in Year 5's final season

We have had three seasons of content so far in Year 5, bringing us five new Operators, classic map reworks, new limited-time modes and more.

But with Year 5 Season 3 released on 10th September, the season is getting dated. Ubisoft is gearing up to hype up Year 5 Season 4 and all the content that comes with it.

Ubisoft already revealed what to expect back at the Six Invitational 2020 when they revealed their plans for Year 5 and Year 6 of Rainbow Six Siege.

Season 4 is going to have one new Operator, hailing from Thailand. The Operator is likely going to be a defender since Season 3 released Zero, AKA Sam Fisher as an attacker.

The season also comes with another map rework, only this time for Skyscraper. Skyscraper originally launched back in Year 1 Season 4, with the release of Hibana and Echo.

The map was once considered competitive, but the game has evolved since, leaving Skyscraper in the past. The new update will no doubt change things up and likely see it return to the competitive pool, just like Theme Park and Oregon.

The new season is also due to get more key system revamps and features. Season 3 released the new ping 2.0 system, map bans, and gadgets.

It could be possible that Season 4 contains the long-awaited replay system announced back at the Six Invitational.

The latest dev blog on the feature back in May mentioned that the feature stores the last 10 games played locally, but the feature is expected to get some cloud storage and the ability to share vods with friends in the future.

Also, it is likely that the rework for Tachanka will drop in Season 4. The Lord of Rainbow Six was recently revealed during a Rainbow Six European League stream and is active on the TTS. It would make sense for the content to drop on live servers at the same time, but it is still possible that the rework could come as a mid-season patch.

A Tachanka rework is coming…

The other big features of the new Season will contain a new Battle Pass, Arcade game modes and more. 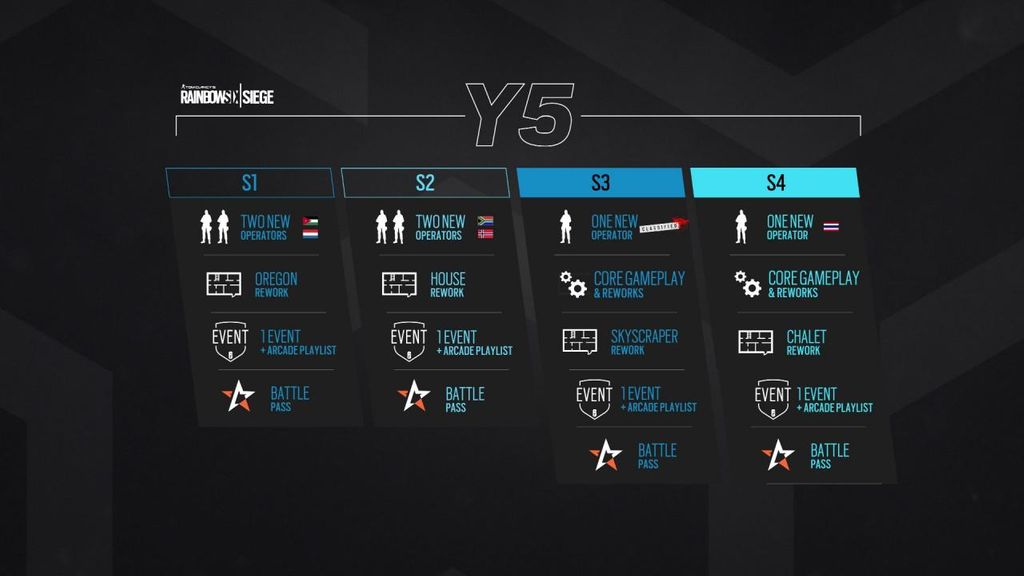 Ubisoft has not officially revealed the release date for Year 5 Season 4, but all that is set to change.

Typically, the end of the season LAN event for their esports programme contains the reveal shows of the new Season.

The European November Major is going to have the latest Season Reveal segment on the broadcast. The date for the Season 4 reveal is the 8th November at 4PM GMT.

When a new Season is revealed on a Rainbow Six broadcast, players can normally get their hands on its contents through the TTS days after the reveal.

The season then exists on the TTS for roughly three weeks, before dropping on a Tuesday. This will bring the ideal release date of Year 5 Season 4 to the first week of December.

Comparing back to Year 4 Season 4, Operation Shifting Tides released on the 3rd December 2019. It is likely we will see a release date at a similar time, so expect Year 5 Season 4 between the 1st December to the 8th December.